James Kennedy wants you to know something about Rugby United New York right away. “We’re not the Knicks,” he said.

Though New York City’s new professional rugby union team is an expansion team, he said, it will not wind up at the bottom of the standings like its basketball brother. Kennedy, the team’s owner and chairman, did not hedge when he spoke about the team’s chances in Major League Rugby. “We are certainly playoff-bound,” he promised.

And why not? The team is 4-1, having played only road games so far in a 16-game season, and is ready for its home opener, against the Toronto Arrows, on Friday night at MCU Park in Coney Island.

New sports leagues — Major League Rugby is in its second year — have a habit of failing, and a professional rugby outfit would seem to be particularly perilous in a country where even many die-hard sports fans don’t know a scrum from a line-out.

But Kennedy expects a good crowd on Friday and beyond. “I’d say we’ll average 4,500,” he said, adding that their first game in the 7,000-seat stadium was “close to a sellout.” The team could be helped by popular pricing: $20 to $35 a ticket.

With confidence, Kennedy added, “We’re looking for a bigger stadium for a playoff game.” The top four finishers in the nine-team league make the playoffs.

The television box is checked. Fans not eager to jump on the D or F train can see many of the games on CBS Sports Network, SNY or ESPN+.

While rugby newcomers will hardly be turned away, Kennedy believes that a good chunk of the fans who turn up will be fairly savvy to the game. “In the tristate area, there are 283 rugby clubs,” he said. “There are 35,000 players who started in college or high school.” He expects the expatriate community to turn up, too.

He described the league’s business model as “a direct copy” of Major League Soccer’s. Kennedy owns his team and also a piece of the league. “If a team or two fails, there’s money to keep it on its feet and then move it after the season,” he said. 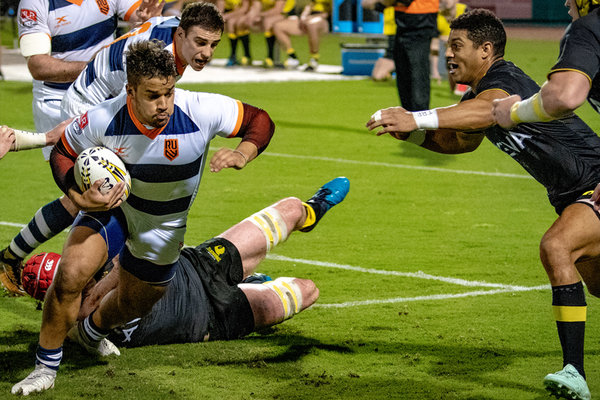 Finding players for a rugby team in a football country required a multipronged approach. The team held four combines. One discovery was outside center Seimou Smith of New Haven, who started as a football player at Southern Connecticut State before shifting to rugby. The team has also recruited overseas.

That recruitment came easily, Kennedy said. “Some big names reached out and wanted to come to New York. That’s the lure of the city, not me.”

The team hired Mike Tolkin, a New Yorker who coached the United States national team and at Xavier High School in Manhattan.

“This only works if it’s a New York team,” Kennedy said. “We wanted to play within the city limits. If we find a New Yorker with 80 percent of the skills of a European, we’ll take the New Yorker.”

One of those is Mike Petri, a scrum half and the team captain. A native Brooklynite who has played in three World Cups for the United States, he teaches science and coaches at Bay Ridge Prep in Brooklyn. “They are very supportive,” he said. “Sometimes I go from coaching baseball or basketball straight to rugby practice.”

Petri, 34, retired in 2015, but the lure of a professional league in the United States brought him back. “The quality of play across the board is outstanding,” he said, citing fullback Ben Foden, who has played for top club teams and the England national team.

“Compared to the New York A.C.,” a semipro club Petri has played for, “you get a high level of skill and a high rugby I.Q. It’s a faster game.”

Like Kennedy, Petri is bullish on the league’s future. “It’s an organic growth,” he said. “We’re going to start with the existing fan base. The rugby community is so tight-knit. The thrill of being part of that group is tangible. And most people who watch their first rugby game are intrigued and get hooked.”

And Kennedy has even bigger plans, arising in part from his background in construction. While acknowledging that options in the city are limited (just ask the New York City F.C. of M.L.S.), he said that in the longer term, “I would love to build a stadium a few years from now.”

For now, though, it will be all about defeating the likes of the Houston SaberCats and the Glendale Raptors and lifting the Major League Rugby trophy.