The Wallabies have organised to spend an extra week training in Japan after the third and final Bledisloe Cup match in Tokyo in a bid to familiarise themselves with surroundings before next year’s Rugby World Cup.

The 2018 schedule for Michael Cheika’s side has all but been confirmed and is set to feature a Test in Padua (also known as Padova) against Italy for the first time in 10 years. 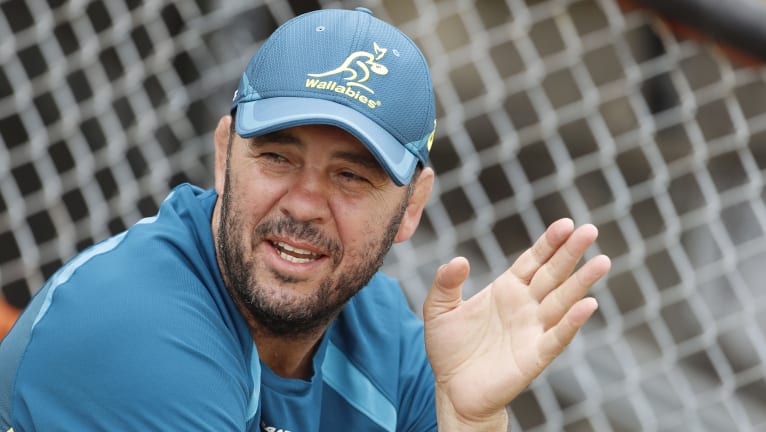 Preparation: Michael Cheika has decided to keep the Wallabies in Japan for an extra week after their final Bledisloe Cup match.

Cheika is happy to see a slight reduction in matches as the Wallabies build up to rugby’s showpiece event in Japan, which kicks off next year on September 21 for the Australians when they take on Fiji.

A game has been tactically scheduled in Tokyo this year between the Wallabies and the All Blacks on October 27 so both teams can get more accustomed to playing in Japan. The problem for the Wallabies is their next match, against Wales in Cardiff, is not until November 10.

Team officials weighed up whether to come back to Australia before jetting off to Britain less than a week later, however, it was decided that spending more time in Japan would prove beneficial.

Odawara, a city in central Japan, has been flagged as a location for the Wallabies' training base from October 28 to November 3. Training loads are likely to be decreased during the week and there is talk of extra rest days. Nonetheless, it will serve as valuable extra time in Japan and a chance to get used to conditions one year out from the World Cup.

The Friday of that week (November 2) marks exactly one year until the World Cup final, a match Australia will be desperate to be a part of. The Wallabies will then depart Asia for the northern hemisphere and make their way to Cardiff for their first match of the spring tour. Australia have won their past 13 matches against Wales, so confidence should be sky high for a fixture at Millennium Stadium.

While there has not been official confirmation, it is understood the Wallabies will play Italy at Padua on November 17. Australia last played at Padua, a city in the north of the country between Venice and Verona, in 2008. They managed a tense 30-20 win thanks to a late try from Quade Cooper on his Test debut. A blockbuster against England at Twickenham will round out the international season and give Cheika a chance to get one over his old Randwick teammate Eddie Jones heading into a World Cup year.

In terms of preparation before important matches, the biggest question will be whether the Wallabies can get their act together before a three-match series against Ireland. The first Test is on June 9 and there is Super Rugby action the weekend prior. The Waratahs take on the Reds in Brisbane, which is somewhat convenient, but Australian players from the Rebels and Brumbies will have to rush back from Auckland and Tokyo respectively into Wallabies camp. The Brumbies have their game on a Sunday afternoon which makes things even more annoying for Cheika in terms of getting his players into camp.

Meanwhile, Wallabies camp dates after Super Rugby will be dependent on how far an Australian team goes in the finals. And unlike last year, the Wallabies will spend their whole week in Auckland ahead of the second Bledisloe Cup match at Eden Park. Instead of training in Christchurch for the first half of the week, like they did in 2017, the squad will embrace the atmosphere of the entire week as they look to become the first Australian team since 1986 to win there.