Padua: The Wallabies have continued their unbeaten streak over Italy with a 26-7 victory but will be sweating on a head knock suffered by David Pocock in the second half that could rule him out of next week’s critical showdown with England.

Two Marika Koroibete tries in the first half opened up a 14-0 half-time lead for the under pressure Australians in what was their biggest lead at the break since the Japan game in November last year. 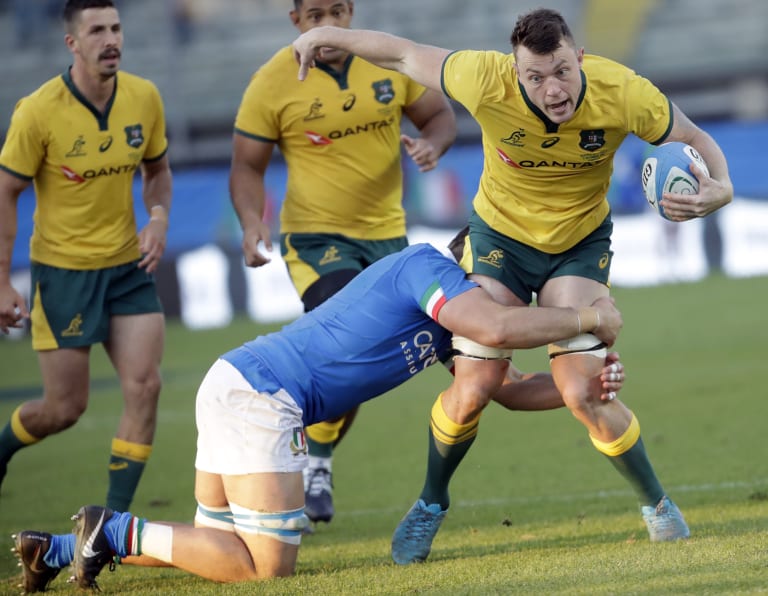 Although Italy played better than their 13th world ranking would suggest, the Wallabies recorded their fourth win of 2018 and 18th in a row against the Azzurri dating back to 1983.

Australia’s defence in the second half was yet again a positive sign as they held Italy out on numerous occasions close to the line.

Captain Michael Hooper was outstanding, making 18 tackles – twice as many as any of his teammates – in a busy performance that showed how much he wanted to get back in the winners’ circle.

As for Pocock, he made heavy contact with an Italian player and looked groggy on the turf early in the second half.

He was taken off the field for a head injury assessment but did not return and will be monitored throughout the week, leaving him in some doubt for Australia’s final match of the year at Twickenham next Saturday.

The pressure has been alleviated, somewhat, on Michael Cheika and his coaching staff but the Wallabies were realistically in a no-win situation. It was a match they were expected to win easily. Funnily enough, it was their biggest win in over a year.

Earlier, after some ineffective kicks from Bernard Foley and Matt Toomua, the Italians made the most of a bad missed Wallabies tackle to almost score in the right corner. 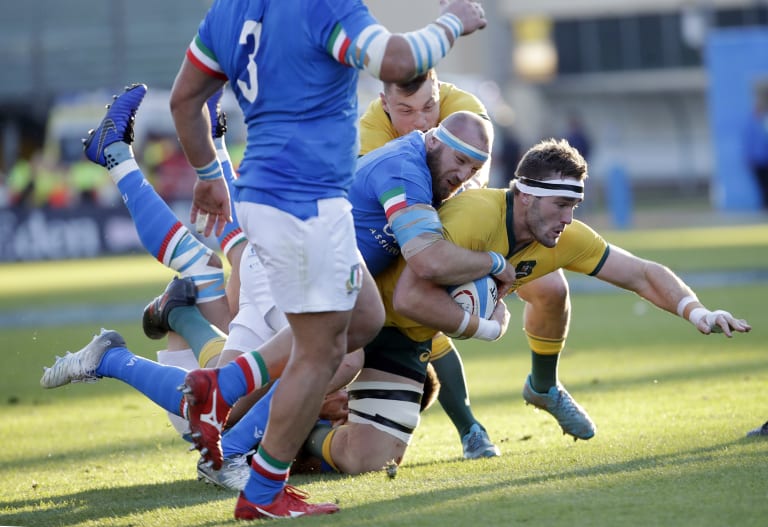 A chip kick and a horrible bounce for the Australians saw Italy No.8 Abraham Steyn grab the ball but his foot was just into touch.

Jack Dempsey left the field with a HIA but returned shortly after as Australia began to find its groove.

There was a heart in mouth moment for debutant Jake Gordon when his pass off the back of a ruck ended up being swooped upon by his opposite number Tito Tebaldi, who ran about 40 metres to score.

However, it was called offside, to the displeasure of the local crowd and Italian bench who voiced their anger. Other than that, Gordon was productive in his first match in the green and gold.

It took until the 31st minute for the Wallabies to break the deadlock, with Koroibete’s try under the sticks a product of a barnstorming line break from man of the match Samu Kerevi.

Like he did against New Zealand in Yokohama, Kerevi carried at the line with venom and on a number of occasions was able to make line breaks that gave the Wallabies front foot ball.

His offload went through Australian sets of hands quickly before Koroibete chalked up his first Test try since the third Test against Ireland.

Five minutes later Koroibete had his second down the right edge, thanks to a nice pass back inside from Adam Ashley-Cooper in what was a reward for patience even when the Australians weren’t overly polished in the first half an hour.

The 14-0 half-time scoreline was a fair reflection of the match but you always thought the Wallabies would coast to a comfortable victory once they had their confidence back.

Taniela Tupou ensured the margin blew out to 21 points after two big runs. The fact he got back up quickly from the ground to support Dempsey, who threw the last pass, is not something props do everyday, particularly for a player of his size.

Just when it looked like the Wallabies would streak away, a poor pass from Foley as Australia attacked was swooped upon by Italy. Winger Mattia Bellini ran more than half the field to plant the ball over the line in the 46th minute.

While the Foley experiment at No.12 didn’t go quite to plan, Toomua’s service was good and he will give Cheika plenty to think about at the selection table ahead of the England game.

Scott Sio went to the bin in the 60th minute for a deliberate knock-on but the big problem for the second week in a row was Australia’s scrum, which was penalised multiple times.

Italy went close to scoring in the 64th minute and threw everything they had a Wallabies defence that by full-time had made 110 of their 126 tackles (87 per cent).

Genia put the icing on the cake in the 79th minute with a try in his 99th Test to set up what should be a fascinating Test week in London against an England side that Eddie Jones will have no trouble firing up.