Israel Folau will front a disciplinary hearing over his conduct under the high ball as his team mate Dane Haylett-Petty put the spotlight on opposition tactics in the aerial contest.

The Waratahs face the daunting prospect of playing their Australian conference rivals the Rebels without Folau and captain Michael Hooper, who is nursing a hamstring strain, after Folau was cited for a second incident under the high ball on Saturday night. 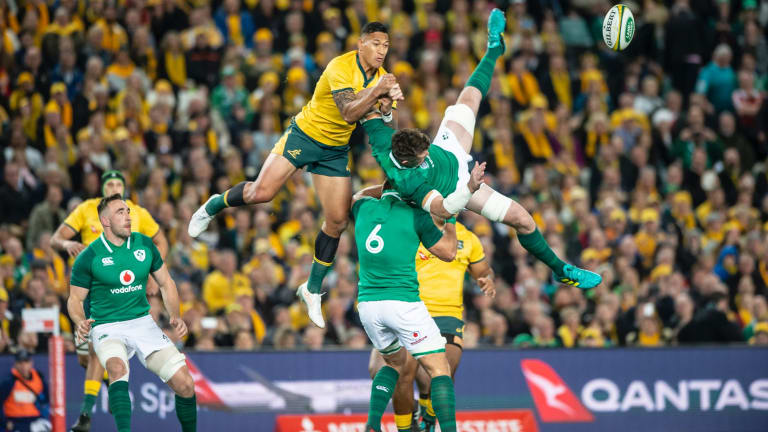 The dual international was shown a yellow card during the Wallabies 20-16 loss to Ireland in the series decider but now faces a possible suspension after the citing commissioner found two other similar incidents and cited him for one of them.

Under World Rugby Regulation 17.25.3 (b), the combination of the yellow card and post-match citation amount to a red card offence.

Rugby Australia were in the process of finding Folau legal representation on Sunday for the hearing under Judicial Officer Shao Wang at a time to be confirmed.

Against that background, Folau's back three team mate Haylett-Petty put some heat on Ireland for putting the player in question, Peter O'Mahony, in a vulnerable position by using flanker CJ Stander to lift his captain in the air to contest possession with Folau.

"I think they're probably encouraging teams to do that if they're going to protect them so heavily," he said.

"[In] every single one of those [instances] Izzy's got an eye for the ball, it's a fair contest, they're at the same level, and then any sort of contact, you saw, he fell heavily, so it doesn't take much at all.

"It really encourages teams to do that if they're going to protect it so heavily."

Haylett-Petty made his 20th appearance for Australia in Sydney and had his own share of aerial contests in a generally strong performance from the Wallabies back three. Marika Koroibete scored a brilliant individual try to spark an Australian resurgence in the second half and Folau was close to his threatening best when he was on the field.

The controversies were not limited to the high ball, but centred around the breakdown as well. In one pivotal moment late in the match, replacement hooker Tolu Latu was penalised for not releasing the tackled player despite not being the player who tackled him in the first place.

"I thought that I wasn't the tackler, so I had all rights to the ball but we didn't get the call," Latu said. "It was a big moment in the game."

Despite the marginal calls, the Wallabies had plenty of opportunities to score and wrest control of the game, but let Ireland off the hook numerous times, whether it was a knock-on, a missed penalty goal or some poor decision-making.

"I do think there were lessons in that Test series. The Irish are very experienced, they were very good at controlling territory, possession, momentum, the speed of the game," Haylett-Petty said.

"I think we're a very good attacking team with so many threats and if we can starting bringing some of that really smart gamesmanship then I think there's a lot of growth for us there. We're already very close."