The Wallabies are effectively at war with rugby officialdom over Israel Folau after the extraordinary full written decision on the Peter O'Mahony incident revealed opposite positions that have no chance of being reconciled.

Privately, Wallabies team officials are seething. And they were seething even before Folau fronted the first hearing. 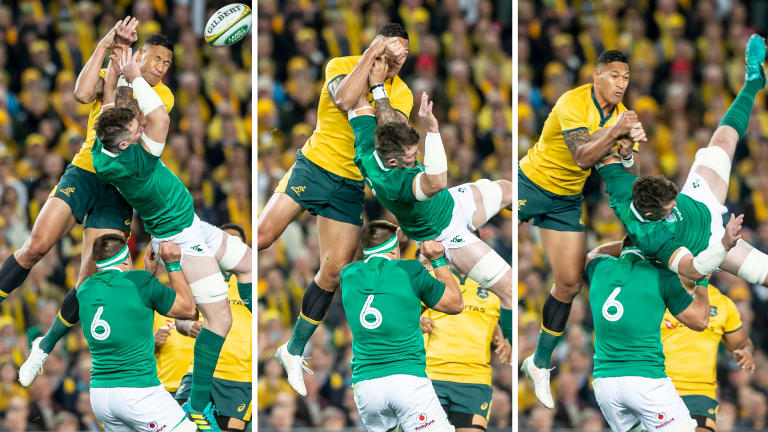 They believe that All Blacks captain Kieran Read should have been penalised for an aerial challenge in the final seconds of the third Lions Test last year and that Rob Kearney's aerial challenge on Dane Haylett-Petty last weekend was no different to Folau's on O'Mahony.

The level of anger has led to a week of cacophonous criticism at World Rugby led by former Wallabies and Waratahs turned pundits, although expressions of relief that O'Mahony wasn't more seriously injured have been far harder to find.

World Rugby will no doubt point to the independence of the judicial committee that ruled against Folau.

But with its finding that Folau was "reckless" the committee has taken a broad interpretation of that key phrase, meaning that if Folau continues to challenge for the ball he is in danger of being carded out of the game.

The full written decision is remarkable for a number of reasons but for four in particular.

First, the Wallabies – with Mick Byrne attending the hearing – even sought to challenge, at late notice, the validity of Folau's yellow card challenge on O'Mahony later in the first half, as well as the incident in the eighth minute that produced the citing commissioner's warning. That attempt was effectively dismissed.

Second, the citing commissioner initially believed the 8th-minute incident warranted a red card for Folau but changed his mind upon reviewing the evidence and finding that O'Mahony used his forearms to break his fall. This revelation will enrage the Wallabies.

Third, there is a strong defence of the 'single lifter' technique from the committee. "One-man lifts in general play are common place and employed regularly by receiving teams on the HSBC World Rugby Sevens Series to combat kicking teams who kick high on the 10m to recover possession," the committee wrote.

Fourth, that Folau was in a realistic position to catch the ball is irrelevant to what happened after he lost the contest. "That the Player jumps higher than most and is exceptional at winning such contests does not absolve him of his duty of care to the opponent under the Laws," the committee found. In other words, Folau broke rule 9.17, which states "A player must not tackle, charge, pull, push or grasp an opponent whose feet were off the ground."

Those four factors provide a comprehensive rejection of the Wallabies' arguments and provide a cold legal response to the parochial rage coming from Australia over the incident.

However, there are two areas in which the Wallabies deserve some sympathy.

Folau was charged with breaking two laws, the other being 9.11: "Players must not do anything that is reckless or dangerous to others."

Yet the definition of reckless here is incredibly broad in the context of aerial challenges. The committee states "the Player knew or should have known that by his actions in the YC [yellow card] or CCW [citing commissioner's warning] that there would be a risk of pulling or further destabilising another player whose feet were off the ground".

That description could be true of every aerial challenge in the game.

The other issue is that the referee, match officials and TMO in the game had a look at the Folau incidents on the night and found no reason to go beyond the yellow card.

Yet the citing commissioner used a 12-hour period with an astonishing 14 camera angles to come to his decision. This will naturally raise fears about the erosion of the referee's authority and ask questions as to whether  the game has become overly forensic.

In short, wasn't the yellow card enough? Referee Pascal Gauzere, to my mind, did an excellent job.

The card was a warning to Folau that a player must put player safety first, but he used enough common sense to keep the player on the field.

This debate will run. But what is clear after a bitter week is that the Wallabies' bitter war with the game's lawmakers is back on, and Folau has been left hanging.