Chris Waller has a rich history with the JJ Atkins and, after The Autumn Sun and Zousain quinellaed the final juvenile group 1 of the season, attention obviously turned to the spring.

Kerrin McEvoy tracked Zousain into the straight on The Autumn Sun and proved too strong in the drive to the line. The pair will be split in the spring. 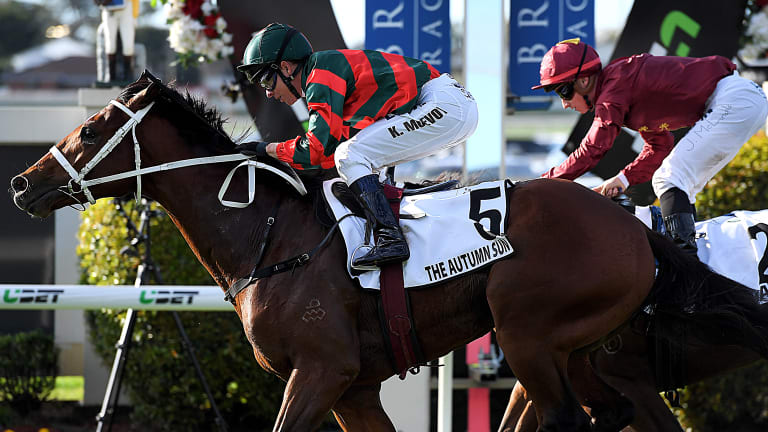 Stable quinella: The Autumn Sun gets the better of Zousain in the JJ Atkins at Doomben.

The Autumn Sun will set out on a Caulfield Guineas path in an attempt to emulate Press Statement, which   won the JJ at his third start on the way to Guineas victory.

Zousain will follow the path of his father, Zoustar, to the Golden Rose and group 1 Coolmore Stud Stakes, both of which he won.

“It will depend what studs get involved with The Autumn Sun as to where he goes, but he looks a miler and a Guineas horse,” Waller said. “Zousain reminds me so much of his dad, and I think the Golden Rose will be his goal.

“These two-year-olds come here as babies and go home men and it makes them for the spring.”

It was Waller’s sixth quinella for the Brisbane carnival and third in a group 1 after the Doomben 10,000 with Comin’ Through and Egg Tart and Queensland Oaks with Youngstar and Another Dollar.

The final group 1 of season, the Tatts Tiara, will be the target for Star Thoroughbreds Noire and Invincibella after they closed the day as winners at Randwick and Doomben on Saturday.

Waller had a winning treble in both states. Jolly Honour and I Am Serious joined the party in Sydney, and he won the Queensland Guineas with Sambro and JJ Atkins with The Autumn Sun before Invincibella stormed to victory in the Dane Ripper Stakes.

“She was very, very good and we will give her the chance at a group 1 now,” Waller said of Invincibella. “Noire did what we wanted in Sydney and we would like to see her up here for the Taira as well.”

Earlier Sambro won the Queensland Guineas after a week of barrier training following his late scratching as favourite in the Fred Best Stakes two weeks ago.

"Sambro's a funny horse but Greg [Bennett] took him after his previous barrier problems and has worked with him. He has obviously done a good job," Waller said.

“If he had won that race he would have been in the Stradbroke, but now he can have a break and look at the Epsom.”

Winless in six starts since he won the 2017 edition of the 3200m test, Plot Twist persevered to lift Adkins' spirits following the death of his grandfather, Ron, on Wednesday.

"I could tell someone was riding with me then to get him home," Adkins said as he savoured his first win over two miles.

Plot Twist shaded a willing duel with $2.50 favourite Doukhan to win by a short half-head. Top weight Destiny's Kiss was 6-1/4 lengths away in third.

Adkins was in the saddle when Plot Twist tailed the field in his previous run in the Listed McKell Cup, and was confident the six-year-old gelding could bounce back in favourable conditions.

"I made steady progress into the race. That's what suits him, not a sit and sprint like last time," he said. "He had a beautiful run in transit. He was in a nice rhythm, and once I approached the 800, I elected to put him into gear."

After being forced to pull the pin on Jungle Edge's autumn campaign because of unusually dry tracks in NSW and Queensland, Mick Bell has finally been able to celebrate with a win in the Listed June Stakes for the wet-track specialist at Randwick.

Bell took him home to Cranbourne after he finished last in the Victory Stakes at Doomben in late April but kept him ticking over, waiting for the rain.

It came to Sydney last week and continued through until Saturday, with the rating a heavy 9.

The outside barrier and top weight of 60.5kg proved no hindrance as Jungle Edge ($6.50) made his way to the lead early under Kevin Forrester.

He stretched his advantage to five lengths rounding the turn and held a 1-1/4 length margin on Shiraz at the end of the 1100m.

"The dream continues," Bell said. "It's good to finally get a wet track for him. I think he's the best wet-tracker in Australia."