Chris Waller continues to set new records but if he is to match his best group 1 season he will need to sweep the features on Queensland's biggest day at Doomben on Saturday.

Waller sits on 12 group 1 wins this season, three behind  his personal best of  15 top-flight wins in 2015-16. He can draw level with wins in the JJ Atkins, Queensland Derby and Stradbroke, which would leave him with the Tatts Tiara to set a new high. 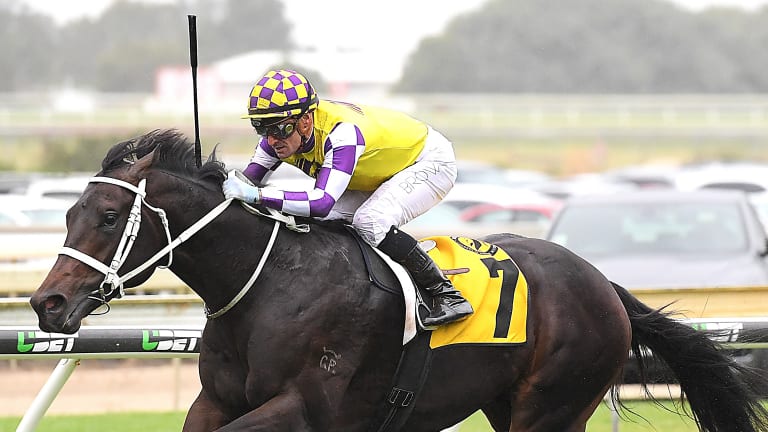 He has a stranglehold on the JJ Atkins, which is the only two-year-old group 1 he has won in his career, with The Autumn Sun, Lean Mean Machine and Zousain. They will  look to give Waller a third win in the race alongside  Pressday and Press Statement. He has also finished second twice with Brazen Beau and Zoustar.

The Autumn Sun is favourite ahead of Lean Mean Machine and Zousain. The latter two  quinellaed the BRC Sires' Produce Stakes a fortnight ago.

Waller believes there isn’t much between the trio, and a gear change and James Mcdonald in saddle could help Zousain, which was a game second in the Sires'.

"We might put some ear muffs on just to help turn him off a little,” Waller said. "We have been telling the jockeys to come out neutral, but we need to tell them to come out negative, because the horse is jumping too well. They all need cover to run their race.”

Waller will start Endless Drama and either Foxplay or Shillelagh in the Stradbroke.

"My thoughts are to run Foxplay on a soft track, Shillelagh on a dry track. The one that doesn’t run in the Stradbroke will go straight to the Tiara in a couple of weeks,” he said.

Tangled, which has run in the Victoria, Australian and South Australian Derbies, will take his place in the Queensland Derby, and a decision on whether Queensland Oaks winner Youngstar and Another Dollar will back up against the boys will be made on Tuesday.

"Another Dollar has had no luck. She kicked back hard in the Oaks,” Waller said. "Youngstar has gone from a maiden to an Oaks winner in one preparation.

"If I had a gun to my head, I would probably say its unlikely they will run but a final decision will be made on Tuesday.”

The search for the Australian Turf Club chief executive continues through an interview process as the club starts it seventh month without a leader.

Acting chief executive James Heddo and Matt Galanos were told they wouldn’t get interviews a couple of months ago as the club looks for leadership from outside its present team.

The committee have interviewed about half a dozen candidates and a decision could still be at least a month away on who will fill the position.

Racing Queensland and the Brisbane Race Club will only run eight races on Stradbroke day to avoid extra stress on the maligned Doomben surface.

The Daybreak Lover Stakes will be removed from the program and run at the Sunshine Coast on Sunday.

The decision means the meeting can start almost an hour later, giving the track a chance to dry out from the regular morning dew.

Officials inspected track on Sunday in preparation for Stradbroke day on Saturday.

“I think everyone is aware that the track has had a lot of work. There has been  some remedial work to it in the past couple of weeks,” Racing Queensland chief executive Brendan Parnell said. “We are trying to have it the best it can be for the two group 1 meetings this month.”

The Australian Turf Club is looking to continue its partnerships for major races with other clubs and could offer a bonus attached to the Metropolitan and Moonee Valley Cup.

The two races have fallen outside the popular route towards the now $7.3 million Melbourne Cup, and a bonus scheme such as the one offered for Sydney Cup placegetters who have placed in five partnered races, is being considered.

The ATC has also held discussions with the Hong Kong Jockey Club about linking races during The Championships such as the TJ Smith and Doncaster with group 1s around the Champions Mile meeting to attract international raiders and get Australian gallopers to Hong Kong.

Racing Victoria chief executive Giles Thompson was a proud man when announcing more than $12 million in prizemoney increases on Friday, but he had to come to NSW for his first winner earlier in the week.

Thompson part-owns Broadside, which broke through in an Albury maiden on Tuesday and will cross the border for his next start to take advantage of the NSW prizemoney again.