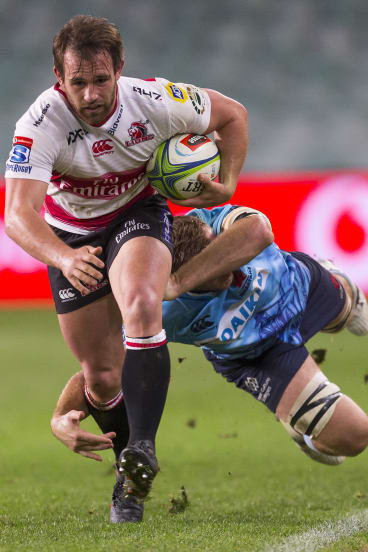 Tough break: The Waratahs couldn’t keep up with their foreign opposition.

1. The best players on the park in Sydney were Lions Malcolm Marx and Kwagga Smith. The worst part of the loss for the Waratahs was that it highlighted that a disproportionate amount of their competition points have been won against Australian conference sides.

The combination of the observations above mean that the four upcoming games against New Zealand teams have the potential to go horribly wrong.

It is not impossible that the Waratahs won't win again until June because the message is out that they can be bashed into submission.

Hindsight experts will point to the non-selection of Will Miller as key to the breakdown issues against the Lions, but the extra ballast did have the desired effect at scrum time, where the Waratahs did OK.

No, the truth is the Waratahs have looked vulnerable up front since their first game and although the Blues are struggling in New Zealand their power runners such as Akira Ioane will come right into the equation at Brookvale in a fortnight.

2. Timu should have gone off

Reds No.8 Caleb Timu is made of the right stuff. His performances to date this season show he is tough and durable. But there is no way Timu should have stayed on the paddock after that huge hit by midfielder Johnny Fa'auli in the second half against the Chiefs.

It is an understandable but incorrect opinion that concussions need to involve direct contact with the head.

In fact, a whiplash-like action, such as the one Timu suffered, can do the same damage. Fa'auli's shot, which has become his trademark, was legal (whether it will be in five years is another matter) but it was still a surprise that Timu was not removed for an HIA. Players can be too tough for their own good.

3. Reds fighting in a different weight class to Chiefs

There were rumblings in NZ that the Reds could be a banana skin for the Chiefs but the game was over within half an hour. The Reds were lucky Damian McKenzie had to leave the field early. 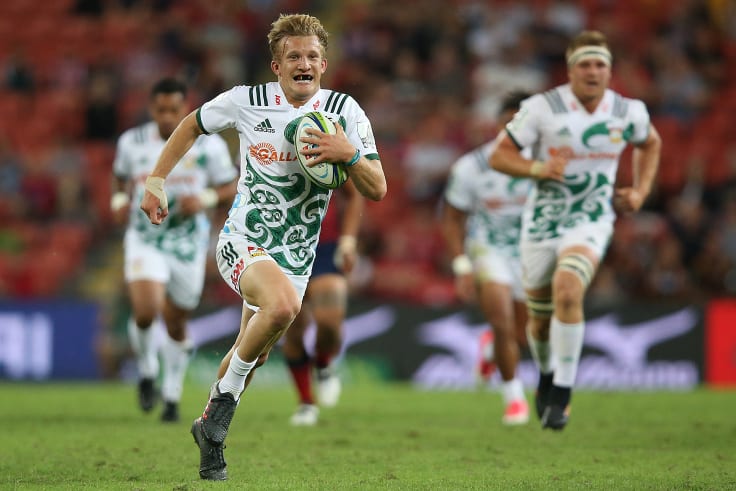 Free roaming: Damien McKenzie on the run with no Reds in sight.

McKenzie has been badly misjudged this season as nothing more than a broken field runner struggling to control the reins at No.10 but in fact he is putting more people into holes than any other five-eighth in New Zealand.

He was showing signs of cutting the Reds to ribbons before his head knock, particularly with his growing understanding with fullback Charlie Ngatai. Even in his absence the Reds struggled, in part due to the rising influence of halfback Te Toiroa Tahuriorangi, who a lot of judges expect to arrive at the All Blacks' door in good time.

4. Rebels show fight if nothing else

It was an odd game in Pretoria. For periods in the first half you expected the Bulls to really run away with it. And possibly they would have, against previous incarnations of the Rebels. But to their credit the Rebels showed a fair bit of grit to keep the game honest, if never threatening a fullback.

Jack Maddocks showed up well after his move to fullback for the unlucky Dane Haylett-Petty, which might be a pointer to where he ends up longer-term, and Amanaki Mafi was his normal ball of energy.

The one area I don't understand with the Rebels is the composition of the remainder of their back row. They have the cattle to be a strong team over the ball with Richard Hardwick and Colby Fainga'a but have resisted the idea even though David Pocock has shown good fetchers can still beat this year's ruck interpretations.

Brumbies lose the key moments – and the ref. There can be fewer more frustrating things for a coach than back-to-back errors. Then multiply them by the fact they were unforced, and against 14 men. That's what Brumbies coach Dan McKellar had to cop from his troops in the second half against the Jaguares with the game in the balance.

First, Tom Banks hoofed the ball out on the full and then Isi Naisarani coughed up a cheap offside penalty from the lineout. They came against a backdrop of ref Angus Gardner's increasing irritability with the home side, and particularly David Pocock.

But the Brumbies can have no complaints. Gardner showed no hesitation in showing Emiliano Boffelli a yellow card for a clumsy tackle on Henry Speight and managed the breakdown efficiently – the Jaguares were just too good there.