How the Waratahs defied history and smashed the Crusaders in 2004

May 11, 2002, is officially on record as the darkest day in Waratahs history.

An infamous 96-19 defeat to the Crusaders in Christchurch served as a haunting reminder of what can go wrong against the Kiwis. When the squad returned to the scene of the crime two years later, painful memories returned as soon as they stepped onto the tarmac. 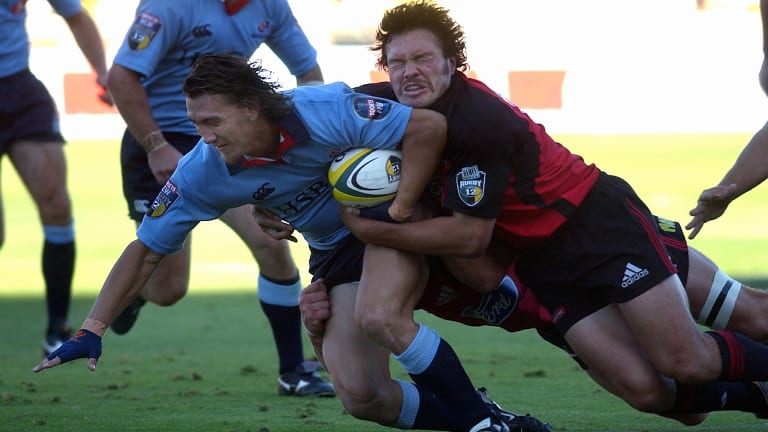 Star: Mat Rogers scored 28 points for the Waratahs in their 43-19 victory over the Crusaders in 2004.

However, the Waratahs managed to defy all odds and orchestrate one of the club’s greatest ever wins, thrashing the Crusaders 43-19.

The Waratahs have not beaten the Crusaders on home soil since, so let's take a walk down Memory Lane and reflect on the glory of days of NSW rugby ahead of what is likely to be a one-sided scoreline this weekend.

It was the opening match of the 2004 Super 12 season and Ewen McKenzie’s first game in charge as Waratahs coach.

The Waratahs were given “no chance” by the New Zealand press of reversing the dreadful result two years earlier, but among NSW ranks, there was quiet confidence, and with good reason.

“I just remember we wanted to rectify that loss,” said winger Lote Tuqiri. “Everything clicked that day, I don’t know what it was.” 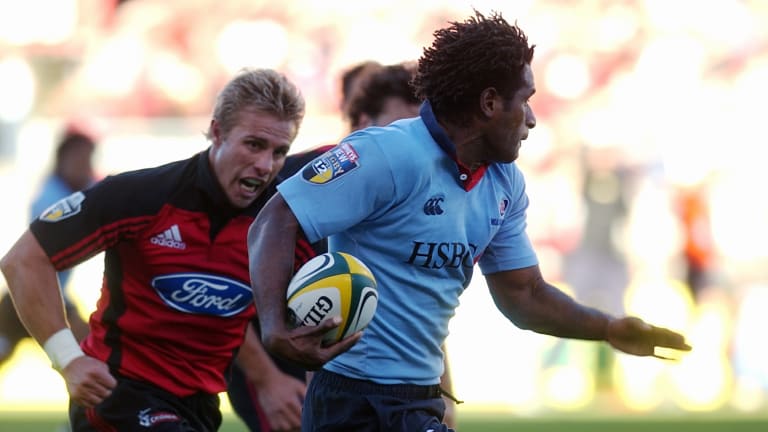 Impressive: Lote Tuqiri on the burst with Justin Marshall in pursuit.

Many people forget the Waratahs annihilated the Chiefs by 70 points in a trial match in Newcastle a few weeks earlier.

They were a much-improved team, playing the Crusaders annually in pre-season matches in order to, in the words of one coach, “get inoculated to the best team”.

Chris Whitaker was the Waratahs captain and the back line boasted big names like Mat Rogers, Tuqiri and Nathan Grey. In the forwards, Phil Waugh, Rocky Elsom, Dan Vickerman, Al Baxter, Brendon Cannon and Matt Dunning were primed for battle in enemy territory.

“I remember Ewen made a point in his first year – he wanted us to break all the hoodoos,” Baxter told Fairfax Media. “We took every game like it was a grand final.

“After the result, I just assumed that’s what you did when you went over to Christchurch.”

The team's assistant coach, Andy Friend, recalled that "we wanted to blast them off the park".

Some players believe the February fixture was advantageous for the Waratahs. At 3.30pm, when referee Mark Lawrence nearly blew the pea out of his whistle to get things started, the temperature was a perfect 26 degrees under a gorgeous Christchurch sky.

“I don’t want to put Christchurch down but there’s not a lot to do,” Tuqiri said. “It’s very cold and you don’t want to be hanging around the whole day.”

By half-time, the Waratahs led 17-9 and, according to the Herald’s rugby reporter Greg Growden in his match report, “performed with poise and passion”. 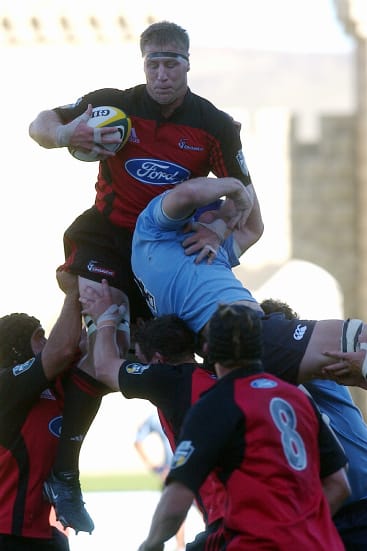 Flashback: Reds coach Brad Thorn in his playing days for the Crusaders.

It seems not only the local crowd at Jade Stadium – now known as Lancaster Park – was shocked by the scoreline.

“We came into the sheds a little bit surprised that we’d put on so many points in the first half,” Baxter said. “The half-time talk from Ewen was about telling us that there’s no reason why we couldn’t go on in the second half and put on more points than the first."

By the end of 80 minutes, Rogers had chalked up 28 points, including one try, in a 43-19 thrashing of a team that had won four of the previous six Super Rugby titles. It was the biggest defeat the Crusaders had ever suffered on home soil and one Waugh particularly enjoyed.

"Nothing washed away the 96-19 loss but it was [pleasing] the fact we went over there with largely the same squad and got the result we did," Waugh said. "We had early season energy and enthusiasm."

Friend added: "At half-time going down the changerooms, [Crusaders coach] Robbie Deans normally had a bit of confidence about him. Well, he didn't have that same look of confidence at the end of the game."

Captain Whitaker summed the victory up afterwards by saying: "It was good to bury some demons out there."

Rogers, in a piece for the Herald, insisted the 77-point loss two years earlier had no bearing on the team’s preparation.

“Honestly, no one in the side made mention of it,” he wrote. “That was just a game the media kept on wanting to bring up. As for my form, it was pleasing to catch a few passes and score some points.”

Tuqiri, from kick-off in the second half, broke six tackles in one barnstorming run.

“I wasn’t even running that hard but I got through a gap,” Tuqiri said. “Everything worked for us that day. It was amazing. A lot of the stuff we were trying was turning to gold.”

In the next 11 matches between the sides, the Waratahs were beaten on each occasion, by an average of eight points.

It wasn’t until the 2014 Super Rugby final at Stadium Australia that the drought was broken, but NSW have been unable to replicate their stellar achievement on that February afternoon in Christchurch.

“I’m not surprised,” Tuqiri said. “It’s a really hard place to win a game. I played in two [losing] finals there.”

Friend said: "There is an element of surprise we haven't done that since. The previous game [in 2002] was a bloodbath. It wasn't a very healthy for the Waratahs or Australian rugby and we certainly wanted to right the wrong there. We knew the Crusaders were slow starters and we were glad we got them first game of the season."