The Waratahs will play in the Super Rugby semi-finals next weekend after pulling off an astonishing 30-23 come-from-behind victory at home against the Highlanders in Sydney on Saturday night.

The 2014 champions, who have not contested a finals campaign in three seasons, were held tryless for the first 50-plus minutes at Allianz Stadium but piled on three tries and 21 points while the Highlanders were a man down to fight through to the final four. 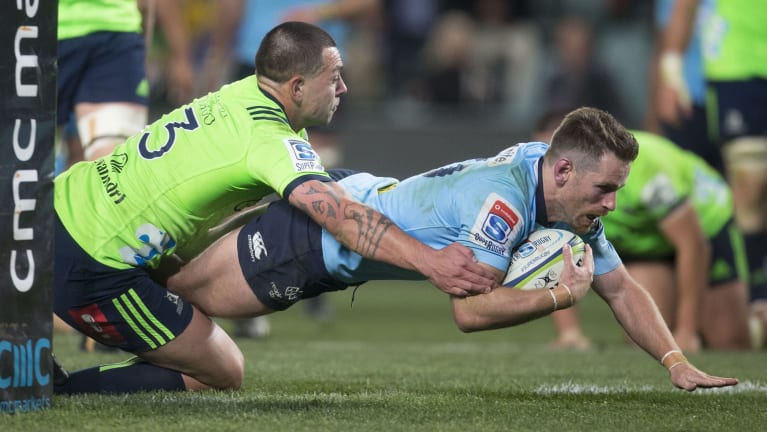 Holy Foley: Bernard Foley crosses under the posts to get NSW back into the contest.

With 10 minutes to go, a penalty goal put the Waratahs in front 30-23 and they held their ground to close out the match, even when replacement prop Paddy Ryan was sent to the bin in the 74th minute. It was an impossible scenario given the 50 minutes of utterly horrible football they had produced to trail 23-6 for most of the game.

In that period, it was inconceivable that the Waratahs were in the finals at all, their first-half performance so lacking in basics that even the players had their shoulders slumped or were shaking their heads in frustration. 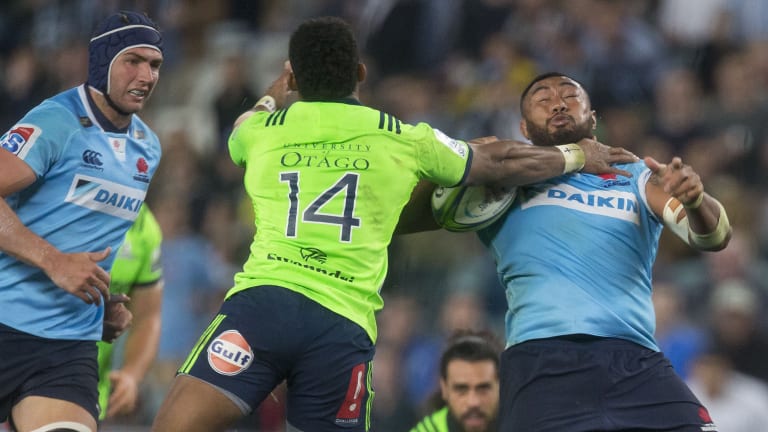 Coat-hanger: Waisake Naholo catches Sekope Kepu high a second time, earning him a yellow card and changing the complexion of the match.

Instead, the Highlanders will be kicking themselves after letting the Waratahs storm back into the game while winger Waisake Naholo was in the bin. The visitors dominated possession and the contact area, but after Naholo was yellow-carded for two dangerous tackles on NSW prop Sekope Kepu, they couldn't score another point.

"That was a pretty pivotal point in the game … once again you've got to give credit to the Waratahs for executing in those moments and us being down to 14 men," Highlanders coach Aaron Mauger said. "It was probably the difference in the end."

Instead, the game opened up enough for the Waratahs backs to do their thing, Bernard Foley nabbing a double and also Israel Folau scoring to make it 30-23 with just under 10 minutes left to play. Tails up, they managed to hold off successive Highlanders' raids and close out the match.

"Full belief in this team, they always show fight, we're never out of a game and I thought how the guys responded after half-time, we just showed belief that what we've done all year is going to get us out of it," captain Bernard Foley said.

Kurtley Beale said the team knew they had a mountain to climb at half-time.

"We worked really hard all year to put ourselves in tough situations like this," he told ABC Grandstand.

"We knew we had to to dig deep at half-time. I'm really proud of the boys to dig down and start playing for each other. We knew we had to put in a big performance for our fans who came out and supported us."

Highlanders captain Ben Smith said the visitors could not wrest back momentum when the Waratahs had built up a head of steam.

"They were playing really well and got a bit of a roll on through those tries that they were scoring," Smith said. "We felt like we could get back into the game and I think we still had our chances, even late in the game, to draw it up. But we didn't take our opportunities towards the end, and you've got to give credit to the Waratahs. They made the most of [it] and deserved the win."

For so much of the match, it looked like their season would end in the weakest of whimpers. 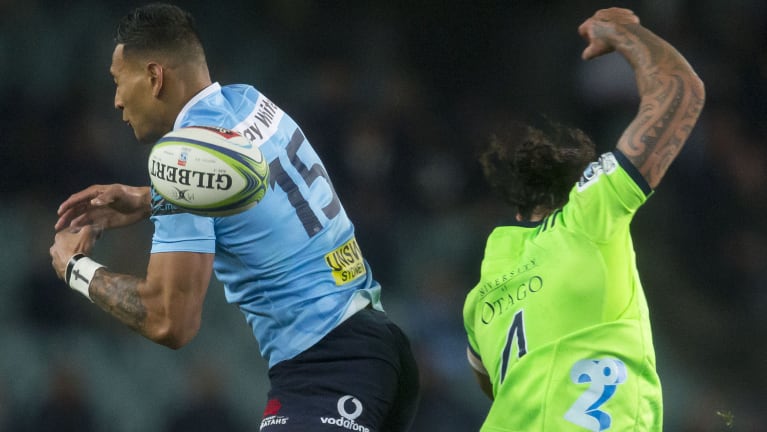 Both teams traded penalty goals in the first 10 minutes before Naholo scored in the 11th minute. Lima Sopoaga converted to make it 10-6 and added a further three points in the 19th minute to get the visitors out to a seven-point lead.

The Waratahs threatened in attack twice in the opening 20 minutes but gave away a penalty on both occasions.

It cost them each time, the Highlanders capable of finishing off in attack with direct running and better execution. Fullback Ben Smith scored in the 25th minute and Sopoaga added the two points to put them two converted tries in front.

Some defensive scrambling saved a certain third try moments later after Israel Folau had made a poor read inside the Highlanders' half.

No.8 Michael Wells was knocked out in a collision in the 32nd minute but managed to make it to his feet to walk off for head injury assessment, while reserve Tom Staniforth made his way onto the pitch to replace him.

The Waratahs' first genuine opportunity to score came from some determined work from Nick Phipps, his kick-ahead and desperate scramble giving the home side an attacking lineout within striking distance of the try line. But in the story of their night, the Waratahs' basics were poor, and hooker Damian Fitzpatrick's throw-in was ruled not straight.

Coach Daryl Gibson brought on replacement hooker Tolu Latu for the start of the second half, looking for someone in blue to assert some dominance at the breakdown.

It bore fruit immediately, with the Waratahs attacking off turnover ball, but some hesitation from second -rower Jed Holloway saw him bundled into touch, along with another opportunity to claw back the 17-point deficit.

Referee Angus Gardner sent Naholo to the sin bin in the 52nd minute after the two high tackles on Kepu. The Waratahs knew it was now or never if they were to save the game – and their season. Two quick tries followed to Foley and Folau, converted by the former to make it 23-20. Then the NSW No.10 added his second and converted it – after a guzzle of water – to make it 27-23 and put NSW in the lead for the first time.

Foley slotted a penalty goal from right in front to put the home side a converted try ahead with 10 minutes to go and that's the way it stayed.