DELE ALLI has confused fans by receiving a bizarre massage from a man's FEET while relaxing on holiday.

The Everton forward shared a video of him receiving the strange massage on his Instagram story. 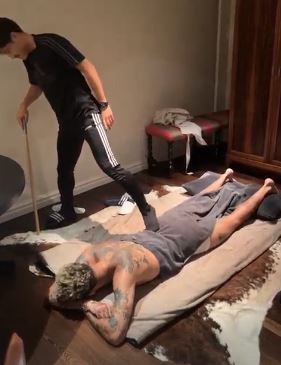 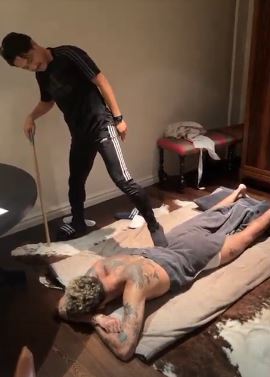 It showed him lying on his front with the masseuse holding a stick while he pressed his foot into Alli's coxis.

And the short clip saw his fans respond to the video in a somewhat bemused fashion.

Reacting to the story, one follower said: "Wtf is going on with @dele_official Insta story 😐😯😅."

It is thought that Alli is currently away in Marbella, Spain following the end of Everton's dismal campaign.

The Toffees narrowly sidestepped Premier League relegation after becoming embroiled in a surprising battle to avoid the drop.

Alli joined Frank Lampard's side in January but has started just one match.

He made 10 substitute appearances, failing to contribute a single goal or assist.

Alli, a former England international, is just nine games away from playing 20 times for Everton – a milestone which would see Everton have to pay his former club Spurs £10million.

Kane's last-gasp penalty RESCUES point for visitors at the Allianz

He could eventually cost around £40m, which is why former Everton defender Richard Dunne has urged the Toffees to cut their losses and get rid of him this summer.

He told the The Express: "I think for Dele it was an opportunity to prove himself and earn a contract.

"He's done ok but he's not done enough to start in the team and Everton needs players to start next season.

"So if Alli is going to cost them millions they would be foolish not to look around and see if they can get someone they can trust and they know will be available. He's not proved that over the last six months.

"I think there's just an overload of players that aren't up to the standard of Everton.

"They got themselves out of it in the end and the manager deserves credit for that but there needs to be an improvement or the inevitable will happen and the manager will change again.

"For Everton to go forward they have to have that consistency in the manager's position and hopefully they give Lampard a few quid to spend in the summer and he can assemble a good team."