A SECURITY guard inside the octagon showed nerves of steel as Conor McGregor practiced his kicks before his UFC 264 trilogy fight with Dustin Poirier last weekend.

As Poirier made his way to the cage, McGregor opted to further loosen himself up by going through his stances and throwing several kicks. 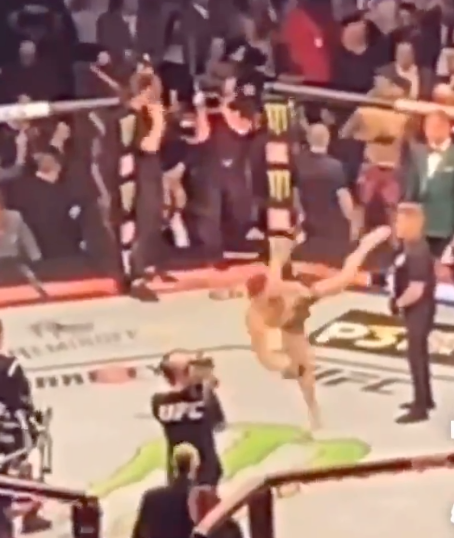 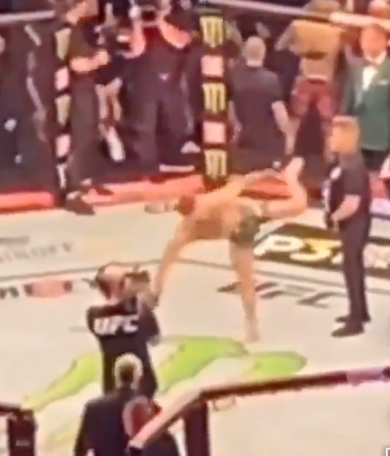 One of those kicks came within inches of hitting a security guard in the face, although McGregor showed remarkable control and dexterity to de-chamber and retract the strike.

The guard, however, wasn't even fazed – remaining stoic as he stayed focused on the job at hand.

MMA fans were stunned by his non-reaction, with one saying: "Crazy how that is the same leg that gave way!"

Another said: "If that kick landed my man woulda been PAID!!!!!"

And another said: "He didnt flinch bc [sic] he knew if that kick connected it was going a be a red panty night for him too."

One remarked: "I blame that security guard for Conor’s leg break."

McGregor, 33, suffered a horrific broken leg seconds before the end of his second successive clash with The Diamond, which was ruled a TKO defeat.

The Irishman was released from hospital on Wednesday after undergoing surgery last Sunday.

And he recently revealed he had 'multiple stress fractures' in his leg going into his series decider with The Diamond.

In a six-minute-long Instagram video, he said: “The leg is better than ever.

"I was injured going into the fight. People are asking me, ‘When was the leg broke?

"At what point did the leg break?’ Ask Dana White, ask the UFC, ask Dr. Davidson, the head doctor of the UFC.

"They knew, I had stress fractures in my leg going into that cage.

“There was debate about pulling the thing out because I was sparring without shin pads and I would kick the knee a few times.

"So I had multiple stress fractures in the shin bone above the ankle and then I have trouble with the ankle anyway throughout the years of f*cking fighting all the time.

"And I also was rapping me ankle every training session.

McGregor will be on crutches for the next six weeks before beginning his road to recovery, which is expected to be a year long.

He added: “I needed to get treatment on my leg.

"So now I’ve got a titanium rod down the knee, from the knee to me ankle and the doctor said it’s unbreakable.

"Then I’ll build the strength. Then I’ve got an unbreakable titanium leg. I was talking to my physical therapist who was with Arnold Schwarzenegger and I was like, ‘I’m like Arnie in Terminator 2'.”