JOHNNY KNOXVILLE made a shock appearance on WWE SmackDown and attacked a superstar – before confirming his entry into the Royal Rumble match.

The Jackass Forever star, 50, revealed last week that he intended to enter and win the 30-man over the top rope extravaganza on January 29. 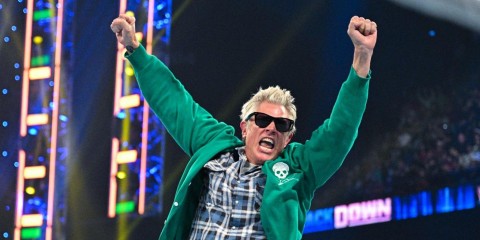 The winner of the legendary battle earns a shot at a world champion of their choosing at WrestleMania.

And now it could be the daredevil Knoxville in the Mania main event after he officially sealed his Rumble spot.

The American appeared on the latest edition of the blue brand last night by first getting into a verbal confrontation with Sami Zayn backstage.

The former WWE Intercontinental Champion angered Knoxville by rubbishing the idea that he could have any success in the Rumble.

The TV personality quickly pointed out that all he needs to be able to do is throw people over the top rope.

Zayn would later face Rick Boogs in a match and lost.

Betfair Exchange offer: Get £70 in FREE BETS for the horse racing this week

Paddy Power betting offer: Get money back as cash if your first £20 bet loses

And it was after that Knoxville slipped into the ring to catch Zayn off guard.

He snuck up behind his new-found rival and threw him over the top rope before celebrating wildly and hyping up his Rumble appearance.

Knoxville declared himself for the Rumble on January 1 in a video he shared online.

And in the clip he wrote: “Happy New Year’s Day and love to everyone. I have a big announcement that I have been dying to get off of my chest.

“I spent a lot of times over the holiday thinking about how i wanted to start off my 2022, and I decided I want to do it kicking ass and taking names. And the best way to do that i feel is making a run for the Rumble, that’s right @WWE’s Royal Rumble.”