These days, horses bred to be at their best over sprint distances command the biggest prices at auction and the most competition in the sales ring.

That makes the VRC St Leger something of an anomaly.

After all, it is run over 2800 metres – a marathon trip for most horses produced in this country, never mind three-year-olds – and there are very few Australian-bred gallopers who excel at such a distance, at least at that stage of their development. 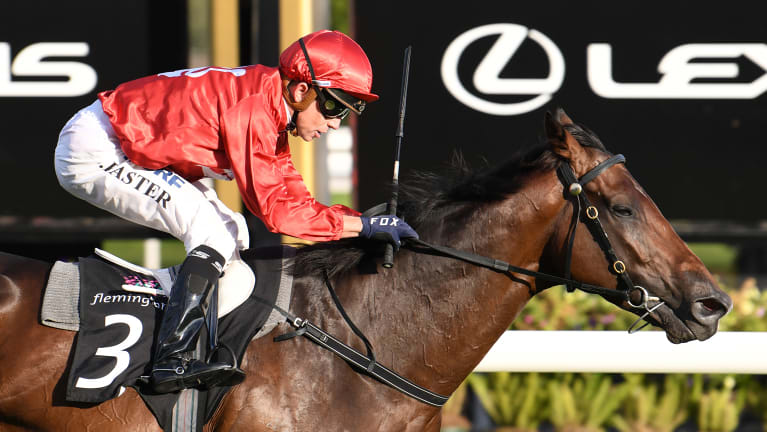 But try telling legendary trainer Gai Waterhouse there is anything odd about targeting a young stamina-packed horse for the Leger, the centrepiece of the Anzac Day meeting at Flemington.

She has made the Leger her own in recent years, landing the listed prize in 2013 and 2014 with Hippopus and Order Of The Sun.

Waterhouse made it three wins in the past six events on Wednesday when her promising young stayer Runaway ($7) did just that, making every post a winning one under Stephen Baster, a rider who has enjoyed a long and productive relationship with Waterhouse's Melbourne operation.

The son of Manhattan Rain, bred by Geelong-based Rosemont Stud, led all the way to land the $120,000 first prize from Rezealient – a representative of another mega-stable, the David Hayes operation – with the maiden Wolfe Tone – from Francis Finnegan's small Cranbourne yard – running on for third place at $14.

In the immediate aftermath, Waterhouse made a heartfelt plea for the Leger to be upgraded with a cash injection and made into a group race, to encourage owners and trainers to buy staying-bred horses. She argued plans to open the race to older stayers were counterproductive.

''I love it, I can't tell you. It's a wonderful race, keep it for three-year-olds, increase the prizemoney and improve the status. This is exactly the stepping stone you need to go to the Melbourne Cup," she said.

Runaway was lucky to still be a colt, she revealed, as he disappointed in a couple of races over shorter distances.

''Two, three starts ago we were going to send him out and geld him. But he must have heard that because he ran away and all of a sudden he hasn't stopped going fast.''

Now he has proved stamina is his strong suit, Runaway will be given more prestigious targets.

''We are thinking of taking him to the Adelaide Derby, but we may freshen him up or take him straight up to Queensland … I will just speak to Anthony Mithen [manager] and Nigel [Austin] to see what they have in mind.

''The other day they won the Sires [at Caulfield with Thrillster], so I wrote to them and said, 'You have got one end of the mantelpiece, wait to Wednesday and you will get the St Leger the other end.' It's a great race, it's a great staying test for young horses.

''They must increase the prizemoney, but it's been slipping under the radar and it shouldn't.''