Jobe Watson has whacked Essendon over the supplements saga that cost the Bombers champion his 2012 Brownlow Medal.

Expanding publicly on the Dons’ catastrophic sports science program of 2012, Watson, who retired at the end of last season, slammed the club he captained for six years, labelling Essendon “negligent”. 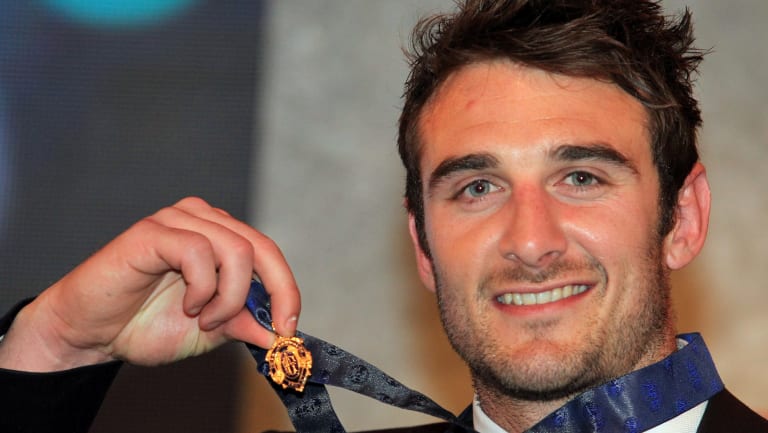 Jobe Watson with the 2012 Brownlow.

“Four years of my career and my teammates' careers were absorbed by this and that makes me sad, I don’t have ill feelings towards the club, but the club didn’t do their job,” Watson told the Plant Proof podcast.

“I do have sadness because of what me and my teammates went through.

“The program was brought in by the club, it was sanctioned by the football club, we’re employed by that club and we placed an enormous amount of trust in the people in the club.”

Watson and 33 other 2012-listed Dons were eventually suspended for the duration of the 2016 season after the World Anti-Doping Agency appealed an AFL anti-doping tribunal decision to clear the players on the charge of taking a banned substance.

The Court of Arbitration for Sport ultimately reached a level of comfortable satisfaction that the players took prohibited substance thymosin beta-4. A subsequent players’ appeal failed, leading Watson to hand back his Brownlow before the AFL would have almost certainly stripped him of the medal.

Four years of my career and my teammates' careers were absorbed by this and that makes me sad, I don’t have ill feelings towards the club, but the club didn’t do their job.

The Bombers had already been striped of their place in the 2013 finals and faced heavy fines and draft sanctions over governance breaches in 2012.

“I think that we exhausted every possible avenue that we could legally to try and exonerate ourselves because we believed we weren’t guilty and that was our belief from the moment the accusations were there right up until all the evidence we saw against us at the final CAS hearing,” Watson said.

Watson acknowledged that he should have done more in the years of the supplements program.

“When I look back on it, of course I should’ve done more, or I could’ve done more, but I don’t necessarily have a huge sense of guilt about it because I didn’t have those feelings at the time and I can’t live retrospectively,” he said.

“I guess when I reflect on it my feelings are of sadness because of the level and the amount of time that it dragged on for.”

Watson, who famously spent much of 2016 in New York where he worked as a barista, said he had wondered whether he would ever return to Australia.

“I remember being at Melbourne airport and leaving and thinking to myself, I don’t know if I’ll ever come back,” Watson said.