'This is the way it should be done': Blues go back to the people

Among all the promotion and self-promotion that comes with State or Origin, there is also a time for giving back.

It began on Tuesday night at Woolloomooloo. Just a few hundred metres from the swanky eateries on Cowper Wharf, NSW players were serving meals to those doing it a bit tougher. There is time to bond with themselves as well as the community. 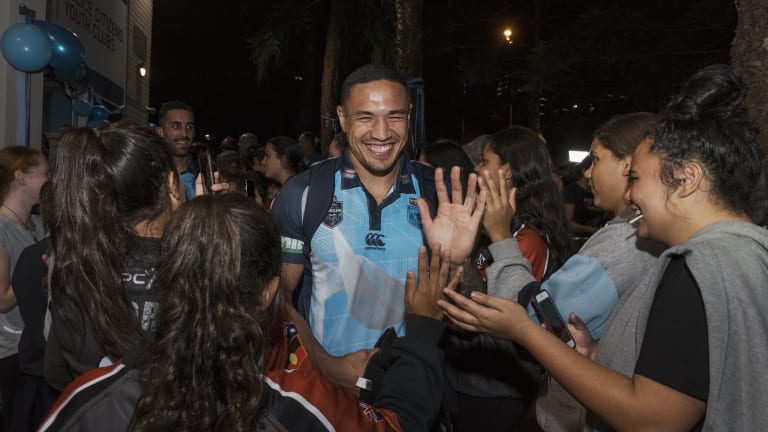 “I think it’s unreal doing this sort of thing,” said rookie forward Angus Crichton after emerging from the local PCYC.

“I just came out of there and there are a whole heap of kids from my old school that are here.

“It’s pretty nice. Freddy spoke about it yesterday, that we’ve been out of the spotlight and the media over the last few years as a team.

“We haven’t delivered over the last couple of years. It’s good we’re doing these things. This is the way it should be done.”

This was done as part of Father Chris Riley’s Youth off the Streets campaign. Fittler has had a long association with Riley, as one of the headline acts in the Hogs for the Homeless rides he does every year. It is a stark reminder that although the state has lost 11 of 12 series to Queensland, there is a bigger picture.

The Blues slugged it out against each other in the gym in a spirited boxing session. Mark "Spud" Carroll was among those in attendance, one of several former greats spending time in camp.

As a newbie Blue, Crichton has nothing to compare this experience to. However, the South Sydney back-rower believes a new ethos is being instilled under coach Brad Fittler.

“I didn’t know what it was like before. I wasn’t here and this is my first time,” he said.

“All I can really comment on is what I’ve seen since coming into camp and that is a really united team and a coach that wants to build a united culture. He’s doing really well so far. The boys are really behind it and everyone is keen to start playing footy.

“It’s a great group of fellas and that’s where it all starts. Good footy comes on the back of playing for each other.”

This won’t be the last charitable act by the Blues. The team will spend time at Royal Randwick on the Saturday afternoon before Origin II, but they’re not there to get on the drink and punt. It will be a whirlwind visit to raise funds for the Mark Hughes Foundation, another plank in Fittler’s plan to reconnect with the community.