Collingwood are better placed than any other club to “scalp” reigning premiers Richmond in a preliminary final at the MCG, according to wingman Tom Phillips.

The young running player reasoned that not only have each of their two games this year been close but the Magpies play a similar style to Richmond and they know the ground as well as the Tigers. 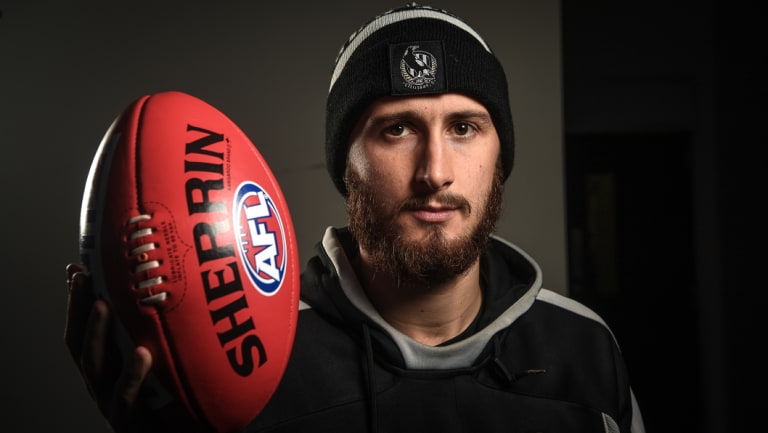 Upset chance: Tom Phillips says if anyone can beat the Tigers in a preliminary final, it’s Collingwood.

They are also familiar with playing in front of big crowds and unlike other teams who would be outnumbered in the stands by the vocal Tigers, the Magpies will be in equal numbers – and voice – at the MCG.

“Both games this year we have been right in them. I think if anyone is going to scalp them at the 'G in a prelim final it would have to be us,” Phillips said.

“It will be balanced, there won’t be a one sided crowd that’s for sure, and we play there as much as them.”

The last time Richmond played Collingwood typified the Pies' season: they played well but lost players in the game. Jeremy Howe and Matthew Scharenberg went down with injuries before three-quarter time. They were also without Adam Treloar and Jordan De Goey that day.

The regularity of finishing games without an interchange bench meant that the club's three best aerobic runners – Philips, Jack Crisp and Steele Sidebottom – all spent more time on the ground than anyone else and by late in the year needed to have their workload managed.

“There were about 10 games in a row where a few of us were playing about 90 per cent or over,” Phillips said.

“I would get one rotation in the first half and that was it for the game. Between about round eight until round 18 or 19 it was pretty solid doing that, probably one rotation a game.

“Even on the weekend in a game we didn’t lose anyone we still had a few periods I couldn’t get off. We had Brayden Sier that’s gone down with an ankle-foot thing, then Jordy with his ankle having tests down in the rooms and they were like ‘no, no you have to stay on we don’t have anyone’.”

The load on Phillips meant that by late in the season they moved him up for a period to the half forward flank and cut his game time to about 70 per cent, mindful not only of freshening him for the finals but of avoiding him adding to the injury list.

Crisp was in the same boat.

“There was a three-week period there where all up I would have spent 10 minutes max on the bench in the three games put together. I think one of those games was against Richmond, I think I ran 17km or something in that game, I was absolutely knackered,” Crisp said.

Crisp, who began as a half forward but has found a role in the midfield as a runner then a tagger, has evolved this year into a position as a high half-back, running and taking the game on. Collingwood’s need for players with pace and run behind the ball as well as someone to lock down on small forwards fed the idea for the move.

Like Phillips, Crisp has been important to Collingwood’s ability to resist the injuries they have had and remain in the fight for the flag.

Phillips has had his best season yet with a purple patch earlier in the year.

A good left-foot kick, he found himself on the right side often on Saturday night and had more right-foot kicks than any game he has had. Some worked.

He had a quick shot at goal that he surprisingly took on his right rather than getting onto his left. The shot just faded away.

“In the end it would have been a real quick poke on the left. I have looked at that one on video a few times and I practise it at training. I practise long and hard at set shots, snaps, all sort of stuff in front of goal (on the right) and I have kicked those in training. I back myself. I wouldn’t have kicked it on my right if I didn’t think I could pull it off,” he said.

“I don’t want to be an idiot and turn back on my left and get into trouble. But you know what? If I am going to go that way I would rather back it in and try to keep following it up even if it doesn’t come off.

"I have always been strong with endurance but I tried to pick up my speed and acceleration off the mark. I am not going to be the same athlete that an Adam Treloar is, or those type of players, but that is something I want to keep working on.

"I know that I could beat that type of player from an endurance four-quarter point of view so if I can try to develop both I will be a harder player to play on and that will allow me to play more on the inside as well as my career keeps going.

“Steele is the one I model most because we do have similar attributes, Ads that is pretty rare sort of power so more realistically it is a Steele as a model. I would love to be more the player Steele is and go down the track he has gone."