Defiant in the face of defeat, Steve Corica insists Sydney FC was the better team despite their 2-1 loss to Adelaide United in Tuesday night's pulsating FFA Cup final.

The Sky Blues were beaten for the first time during Corica's reign as coach in front of a packed Coopers Stadium. In a cruel twist, it was the player who turned him down in the off-season, Craig Goodwin, who decided the contest with two stunning goals for Adelaide either side of an Adam Le Fondre penalty. 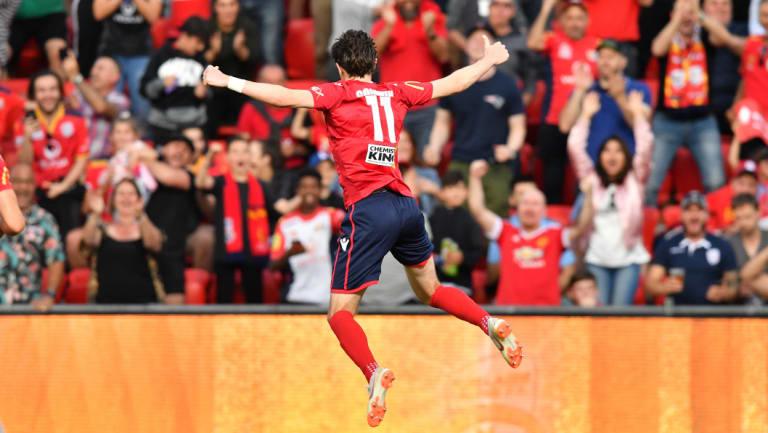 Double delight: Craig Goodwin celebrates after scoring one of his two terrific goals in the FFA Cup final.Credit:AAP

"We tried to sign him, and that's why," Corica said. "To come up tonight and score two goals, congratulations to him. He wanted to come home, back to Adelaide. For him he probably thinks he made the right choice."

Corica believed his team was hard done by. The match looked even and statistics bore that out, with possession split and both sides taking three shots on target in a tense, nervy affair. That's not how Corica saw it, though.

"It is a bit tough to take because I believe we were the best team on the night," he said. "We looked more like scoring than what they did. Yes, it was tight, but we dominated most things.

"Defensively we were great. We pressed them, they went long, it was all about the second ball. We went forward, we wanted to win the game, but at the end of the day it doesn't matter sometimes. It's a scrappy win for them but it's a win. We'll keep playing the way we do."

Sydney FC players will drag their tired bodies and broken hearts onto a flight to Melbourne on Wednesday ahead of their A-League clash with Melbourne City on Friday night at AAMI Park. It will be their third game in the space of six days. Corica found middle ground with his Reds counterpart Marco Kurz, who called for the FFA Cup final to be played before the start of the A-League season in future, rather than two rounds in, to avoid such scheduling challenges. 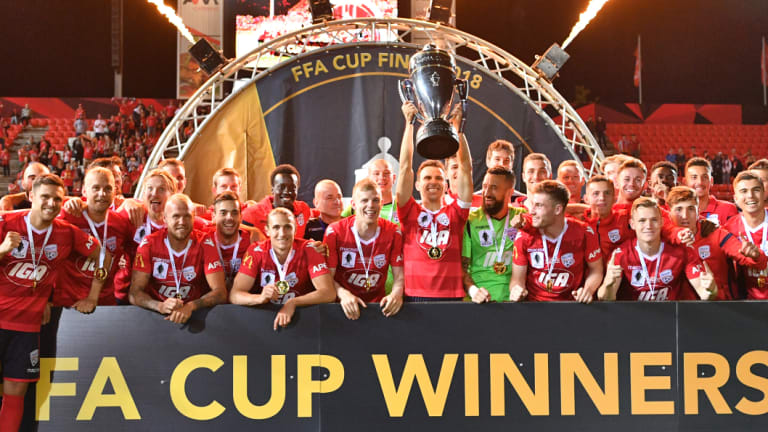 "That's something they need to look at maybe for next season because so early in the season, to play three games in six days is not easy for our boys," Corica said. "Especially after a loss and in the cup as well. It's disappointing but we're going to do everything we can to recover, to give ourself the best chance to win in Melbourne."

One player who won't be making the trip is marquee recruit Siem de Jong. The Dutch midfielder hurt his hamstring in Saturday night's Sydney derby and Corica confirmed he won't be fit to play again for another five or six weeks. It's a gut-wrenching outcome for a player whose entire career has been blighted by injuries, and it may force Corica to look to the transfer market for a short-term replacement.

Goodwin, meanwhile, was feeling a million bucks after the match. The 26-year-old was the runaway winner of the Mark Viduka Medal for best afield. His timing was superb – Socceroos coach Graham Arnold was among the nearly 15,000 spectators who watched him dominate an absorbing, end-to-end final.

"It's good to show what I can do in front of the national team coach," Goodwin said. "It's always my aspiration to push back into that but I know to get anywhere near that squad now I'm going to have to keep performing consistently and keep doing my best for the team."

Goodwin's first goal, a curling 25-metre free kick, set the match alight. But the winger said he preferred his second, a right-footed volley in the 74th minute. "It gives us the 2-1 lead at an important time and for me, it's probably the best goal of my career so far being in a cup final," he said. "I'm really happy for the team and for myself. To score two goals at home in the cup final is I guess the things you would dream about."