The Europeans have worked out they have to respect our horses and racing but when it comes to the Caulfield and Melbourne Cup have an edge on the local product in class, which is not illustrated in the weights.

They are sending better horses and Australians are buying plenty more of them to target the huge money on offer to stayers. 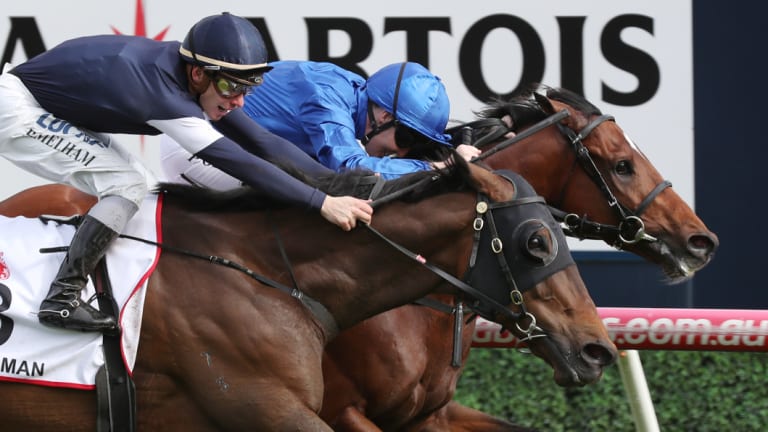 The Melbourne Cup is a showcase for our racing but there is a time coming, in the not so distant future, where Australian and New Zealand horses might not even be there on the first Tuesday in November.

The problems start in the breeding industry where speed is considered the number one asset. But with the world getting smaller the influence of Europe is seen on our racing with more imports filling the ranks.

The raiders have to travel a long way to get here but are welcomed with open arms. It cost around the $100,000 mark to get on a plane from Europe but there is no prize to match the more $12 million they can run for in two Australian races at home at this time of year.

Best Solution came to Caulfield as a two-time group 1 winner at 2400m in Germany at his past two starts on Saturday and with 57.5kg was probably in light. While his winning margin was narrow the Godolphin stayer did more work than any of his rivals in the run.

Would a kilogram have made a difference to Homesman, which was smartly placed in Australia to get in on 53kg, we won’t know, but in an effort to encourage overseas raiders the handicapper appears to play down their achievements.

There is the obsession to have international participation in the Cups. The Melbourne Racing Club offered a $100,000 travel incentive this year, which was put on the race before the prizemoney was boosted to $5 million.

MRC chief executive Josh Blanksby explained it was there to encourage Japanese and European horses to come to help grow international wagering revenue. The MRC are the only club in the country to hold their own wagering rights.

“You need Japanese horses for the race to be bet on in Japan,” Blanksby said. “We are going to review all the factors to do with the race after getting our results, and the travel incentives are something we will look at.”

The internationals also do not pay for track fees or boxes to stay at Werribee as that is looked after by Racing Victoria at its quarantine centre.

While incentives are part of most international carnivals, the Caulfield Cup and the Melbourne Cup are unique in that they are open entry, where most other overseas jurisdictions invite horses to run in their races.

The Victoria Racing Club refuses to pay incentives to Melbourne Cup runners, which can cover their cost by running in the first 10.

The cups are handicaps, so getting in with the lightest possible weight when compared to your opposition is important. It is an art form.

But we need to have competitive Australian horses in these races.

As the race has been internationalised, the handicapping of our stayers has stayed the same. The Cups have traditionally been the playground of our Derby and Oaks horses from the previous season, winners are weighted around 54kg or 55kg for the boys and 51 to 52.5kg for the girls.

This is without them testing themselves against open class. It means they get into the Cups, but when compared to raiders they are often poorly treated.

This year Victoria Derby winner Ace High has 55kg in the Melbourne Cup, while Irish Derby winner Latrobe has 52.5kg. The difference is because of six months difference in age but on the weight-for-age scale, which is used for ballot order, Ace High has a half kilogram more than the lightly-raced raider.

Another example is between Humidor, which didn’t run on Saturday, probably because he would have been asked to wear the No.1 saddlecloth, and The Cliffsofmoher.

Humidor has won a group 1 at 1400m this season but has run beyond 2000m since finishing with the tailenders in last year's Melbourne Cup. He was competitive at weight-for-age level without winning other than the Memsie Stakes. His handicap is only 1-1/2 kg under weight-for-age in the Melbourne Cup.

The Cliffsofmoher, an English Derby runner-up, has been racing in weight-for-age company in Europe and been competitive with several placings. He is not a group 1 winner after 11 attempts following his Caulfield Cup third on Saturday. He is 1-1/2 kilos better off than Humidor.

Australian stayers are probably being rated up to their best, while those coming from overseas chose to come when they have the right weight.