The show cause hearing involving besieged trainer Darren Weir and his Warrnambool foreman Jarrod McLean continued for more than eight hours at Racing Victoria headquarters on Monday as both men and their lawyers argued their case as to why they should be able to keep training in the immediate future.

The duo arrived just after 1.30pm on Monday afternoon for the scheduled 2pm start of what turned out to be a marathon session at the Epsom road base from which Victorian racing is administered.

Weir and McLean arrived some 25 minutes before the scheduled start of the hearing, entering the Racing Victoria headquarters via a back door. 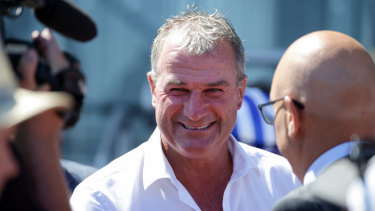 Darren Weir had no comment when he arrived for the hearing.Credit:AAP

The entrance was initially locked and they gained access only when the door was opened by waiting journalists, whom they then brushed past as they headed to the room where the in camera hearing was to be held.

It's understood the hearing proper began just after 3pm, though Weir and McLean had entered the stewards' office some 75 minutes earlier. It was suggested that the first hour and a quarter had been taken up with preliminary discussions.

Weir, who has dominated Victorian racing for the past five years, was tight-lipped when asked if he was going to hand in his licence.

McLean, who is also a group 1 winning trainer in his own right, was asked if he would fight the charges and replied in the affirmative.

The hearing was held before a panel of three, headed by chief steward Robert Cram along with deputy chairman of the stewards panel Rob Montgomery and Corie Waller, a senior steward.

The trainers are being represented by lawyers Patrick Wheelahan and Tony Hannebery. 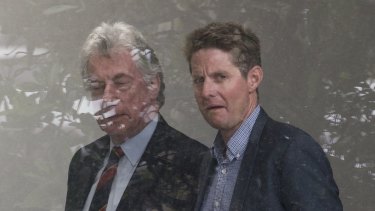 During the procedure the duo was asked to argue why they should continue to be allowed to enter and run horses pending the outcome of the hearing, which began last Friday via telephone hook-up.

Three of the six charges laid at Weir's door last week related to the use of "jiggers", electronic devices to deliver an electronic shock to affect the performance of a horse.

Weir was sensationally arrested in a swoop by police at his Ballarat stables last Wednesday, but was later released without charge.

The jiggers, an unlicensed firearm and a small quantity of cocaine was found at the premises.

During the course of the hearing there were a handful of adjournments and breaks where both men left the room in the company of legal advisors.

It is understood that the two trainers argued that they should be allowed to continue, at least until their core charges were eventually heard, because of the size of their stables, the number of horses affected and the staff involved.

There are a number of options open to the stewards in this scenario, one of which would be to let them continue to look after the horses but not allow them to enter or race them. That would ensure the staff could remain at work while the situation played out.

If they win their case it will be a temporary reprieve as they will eventually have to face a series of charges (Weir six, McLean four) at the Racing Appeals and Disciplinary Board, which will ultimately determine their fate.