Adelaide: Another day, another state, another group one winner. But no matter where he has to travel, or how many he gets, Darren Weir never gets tired of success at the highest level.

Last week Weir had teamed up with Harry Coffey to win the Australasian Oaks at Morphettville with Sopressa, taking one of the big group-one races that kicked off the Adelaide Festival of Racing. 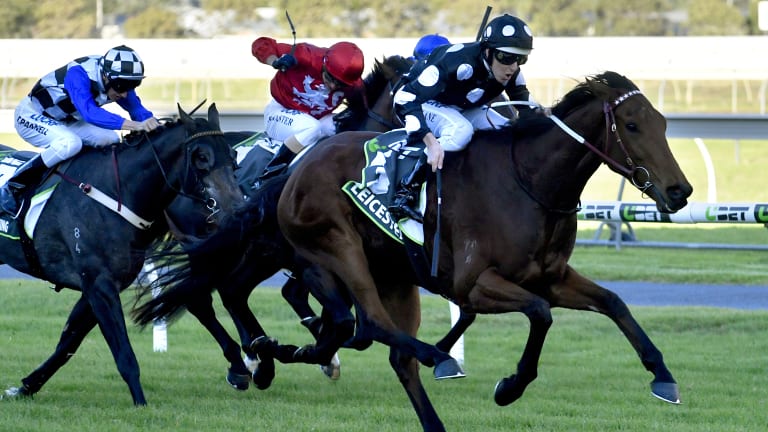 Damian Lane rides Leicester to victory in the South Australian Derby at Morphettville.

On Saturday the Victorian champion trainer turned up in the South Australian capital for a second successive Saturday in a bid to land the other half of the big classic double, the SA Derby.

He had won the race for the previous two seasons, with Howard Be Thy Name and Volatile Mix, both ridden by one of Weir's stable stalwarts, Irishman Johnny Allen.

This time he went for the hat-trick and, appropriately enough, was triple handed in his bid, with Allen on Civil Disobedience, another stable regular Dean Yendall on Savaheat, and Weir's go-to man Damian Lane on Leicester.

The latter had won the Chairmans Stakes at group-three level over the Morphettville 2000 metres a fortnight ago, and Weir had thought long and hard about whether to persevere with his campaign, fretting that the mile and a quarter might be the limit of his stamina and that the 2500 -metre Derby might just be a test too far.

He needn't have worried. Under a cool ride from Lane, Leicester – a son of the top  sprinter, Wanted – came with the last run to see off the David Hayes-trained Rezealient, partnered by Jamie Kah, with Gai Waterhouse's gallant pace-setting Runaway, under Stevie Baster, hanging on well to retain third spot.

Normally horses that win over 2500 metres as three-year-olds are pigeon-holed as stayers of the future, with Cups campaigns usually signalled as their spring assignment.

But in the immediate aftermath of his victory, Weir said his gelding would now be turned out for a spell and brought back for the spring, where a race such as Caulfield's group-one Toorak Handicap could be a target.

"He needed that run to show that turn of foot. Had he had a tough run I doubt he would have been able to run the trip, but the way that Damian rode him … he switched him off, got into the right spot, but more importantly, didn't press the button until the last 200 metres," Weir said.

"I said to him just ride him to run the trip, so a big pat on the pack for Damian. He's going to the paddock. Against his own age I think he could probably get away with it (running the 2500-metre distance), but I don't know if he will against the better ones."

Lane gave the horse and the trainer the credit.

"My ride is a small part of the operation. I think the genuine tempo really helped him. When he kicked strongly at the 200 I knew he was going to be hard to beat. No one gets them fitter than D Weir, and to his credit he was strong to the line." 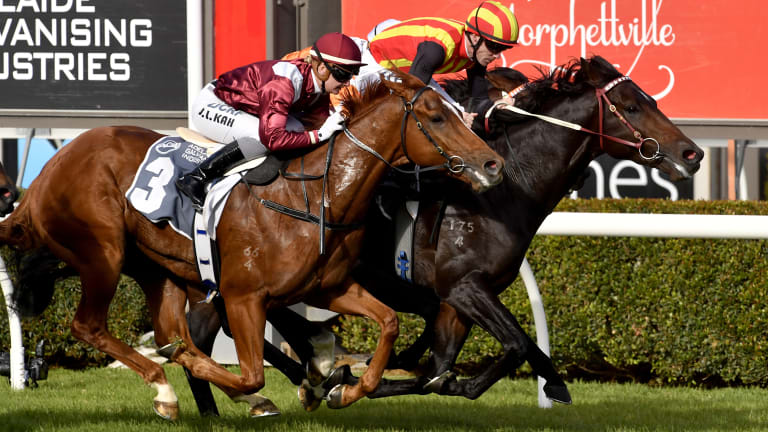 Leicester's win rounded off a profitable day for the Ballarat stable, as Weir – this time with Allen in the saddle – had taken one of the other major contests, the Adelaide Guineas, with Peaceful State.

An odds-on favourite, the son of Animal Kingdom looked as if he might win by the length of the straight as Allen eased him into the race on the home turn.

But, the jockey said afterwards, he seemed to duck into himself a bit when challenged in the straight by the Tony McEvoy-trained Over Exposure as the pair came wide and tried to collar the front-running Sircconi on the rails.

Eventually Peaceful State knuckled down to the job in hand and won in a photo finish.

Weir ended up with a hat-trick on the day as his sprinter Camdus, also ridden by Lane, took the opener.

Victorian trainers Paul Preusker, with I Am Someone, ridden by Warrnambool-based Irishman Declan Bates, and Daryl Dodson (Bertwhistle) also enjoyed success in support races on one of the big days of the South Australian racing carnival.