Bangalore:  Afghanistan have lost 20 wickets on the second day of their historic Test debut against India to plummet  to defeat by an innings and 262 runs.

India, positioned atop the ICC rankings, enforced a follow-on against Afghanistan after the tourists were skittled out for  109 in their first innings in reply to 474. 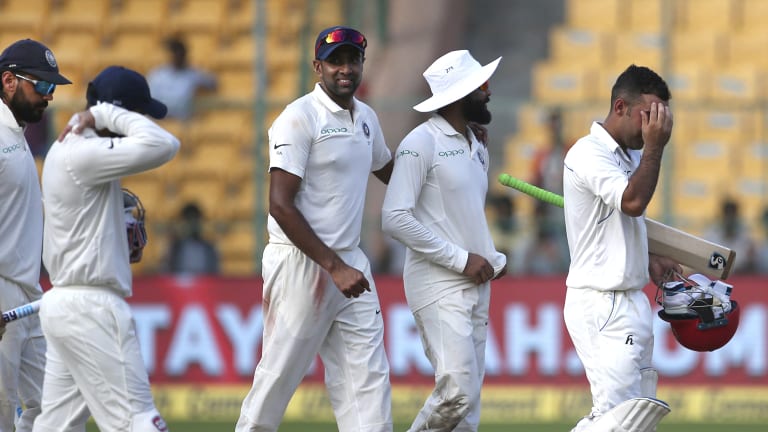 That’s over: Afghanistan’s Hashmatullah Shahidi, right, leaves the ground as Indian players celebrate their win in the one-off cricket Test match in Bangalore.

Afghanistan’s batting order crumbled again in the follow-on innings, with spinner Ravindra Jadeja claiming four wickets and conceding just 17 runs as the visitors were bowled out for 103.

‘‘The seamers set the tone and I was just bowling in my areas," Jadeja said. "Today’s wicket was very flat and I was not getting turn.

"Me and Ashwin were talking about restricting them. We just looked to keep it simple.’’

Hashmatullah Shahidi was Afghanistan’s top-scorer with 36 runs in the second innings as he and captain Asghar Stanikzai offered a little resistance in the follow-on.

‘‘Before we had not played a Test match," Stanikzai said. "We were surprised with the match ending in two days because our team is good. Disappointed with the batting, but it is good for the future. We have a lot of time to work on our weakness."

Earlier in the day, India posted a strong 474 after Pandya scored a half-century to build on the solid foundation laid by opening day centurions Murali Vijay and Shikhar Dhawan.

Afghanistan got off to a quick start before Indian pacemen Umesh Yadav, who notched his 100th test wicket, and Ishant Sharma sent the Afghan top order packing.

Spinner Ravichandran Ashwin then claimed 4-27 as the visitors collapsed under the pressure. AP