Wells to play Geelong, Pendles 'under some doubt'

Collingwood coach Nathan Buckley has confirmed that Daniel Wells will play his first game for 2018 against Geelong on Sunday, while he has also given the strongest indication yet that captain Scott Pendlebury is struggling to be ready for the clash.

Wells last played for the Pies in round 20, 2017 and has bide his time in the VFL the past few weeks in a bid to regain fitness from an achilles injury that interrupted his pre-season.

Buckley named Wells on an extended bench on Thursday night and on Friday told reporters the 33-year-old would be more than "the cream on the cake" against Geelong at the MCG on Sunday, and for the remainder of 2018. 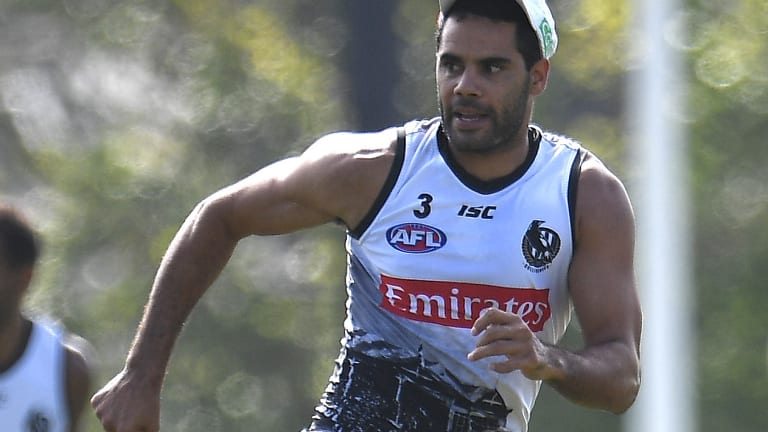 Daniel Wells will play against Geelong.

"The easy way to look at it is that he [Wells] is the cream on the cake but he is obviously a bit more than that for us," Buckley said. "And obviously last year he showed that his capactity to infleunce the game in all phases – clearly we know he is very dangerous with ball in hand – but good contested ball player and defensively he puts great pressure on.

"He has worked his way back into match fitness over the last three or four weeks and we think it's the right time to re-introduce him and looking forward to seeing what he can bring.

"When your side is performing at the top it gives you a few more options [like not having to rush Wells back]."

Despite only playing 10 games in his first season for the Pies after switching from North Melbourne, Wells' influence was significant for Buckley's side in 2017. Collingwood won seven games he played in, drew one and lost two. The team only won nine games for the year.

Skipper Pendlebury injured his ankle in the Pies round seven win over Geelong. He has been named in the side and Collingwood will give him right up to game-day to be fit, however he did not train on Friday.

"He [Pendlebury] has to be under some doubt given that he didn't train today but we will run him all the way to the line," Buckley said. "Pendles has been moving on it and he has an understanding of where it's at so we are giving him another couple of days, it wasn't ready to go today."

Geelong have welcomed back Harry Taylor and Gary Ablett from injury for the clash. Lachlan Fogarty and Tom Hawkins (suspended) are the confirmed outs at this stage. Zac Smith has also been named in the 22 after he was a late withdrawal last round. He has only played one AFL game in 2018.

Both the Pies and Geelong will finalise their teams for Sunday on Friday evening.