An unsentimental Robbie Farah has insisted he would have no qualms pulling the pin on his NRL career without a farewell game, likening the Wests Tigers' season to being on "life support" despite a season-saving win against Manly.

The veteran hooker didn't pull any punches in his assessment of a gripping two-point win over the besieged Sea Eagles, confessing it "felt like a loss" as the Tigers surrendered a chance to boost their points differential. 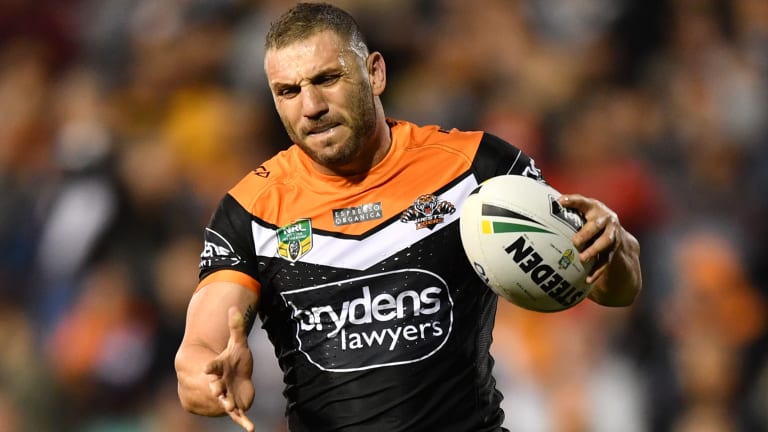 Hanging by a thread: Robbie Farah and the Tigers are relying on the results of other teams to make the semi-finals.

The Roosters can ensure the Tigers will have it all to play for in the final round of the season if they beat the Broncos at Allianz Stadium on Saturday night, but Farah wasn't getting too carried away as the joint venture clings to hope of making their first finals series since 2011.

"We're on life support to be honest," Farah said. "It's disappointing we didn't put our foot down and win that game by 20 or 25 points to really close the gap on the for-and-against. It kind of feels like a loss to be honest.

"I guess we've given ourselves a chance. Hopefully we don't look back with regret. There are some games there we dropped through our own fault. [But] we're in with a shot with one game to go and we'll see what happens."

To improve an inferior for-and-against record the Tigers will need to put a score on the minor premiership-chasing Rabbitohs next Thursday night in a game which could well be the last in the NRL for Farah and Benji Marshall.

Farah has been offered a one-year extension to remain at Concord but hinted he would be more than happy to wait until the end of the season to make a decision – even if it meant he forfeited a send-off game.

"I've tried to really block all that out," Farah said. "That sentiment – while it's nice – it's not the main thing.

"I haven't wanted to rush a decision and I'm not going to make a decision because it might be my last game. When I'm ready to do that I will, but at the moment my full focus is on playing good footy heading into the semis. If next week happens to be my last game then that's the way it is.

"For me to come back here and finish off the season is something I've thoroughly enjoyed and regardless of whether we make the semis or don't, it's been a great year for myself individually."