Western Bulldogs president Peter Gordon says the club will look to the maximise the commercial value of the Whitten Oval redevelopment to offset the approximately $1.5 million annual loss resulting from the club’s planned exit of the gaming industry.

With the sale of pokie machines largely off-setting lost revenue in the immediate term, Gordon said the club would look to explore the possibility of additional hospitality and reception facilities, or harness the club’s sports medicine capabilities in order to leverage additional revenue in the long-run.

The redevelopment, a masterplan for which is expected in 2019, will seek to "enhance the experience of coming to the Whitten Oval and retain all that’s great about it … while optimising the commercial value," according to Gordon.

Speaking at the club’s annual general meeting on Wednesday, Gordon did not detail a timeline for the Dogs’ pokies exit.

In a sign of the Dogs’ 2016 premiership being a distant memory, departed premiership players Luke Dahlhaus (Geelong) and Jordan Roughead (Collingwood) were awarded life memberships, having surpassed the 150-game mark last season.

Dahlhaus left the club in acrimonious fashion, posting incendiary remarks on social media in reaction to comments from his premiership captain Robert Murphy, who questioned Dahlhaus’ motivation in the year following the Dogs’ 2016 flag.

Meanwhile Western Bulldogs director of football Chris Grant said the club looked back on season 2018 as a positive one for the development of the club’s list, despite it being a challenging one.

Grant emphasised the Bulldogs’ relatively young and inexperienced list, coming off a year in which they finished 13th, registering eight wins. 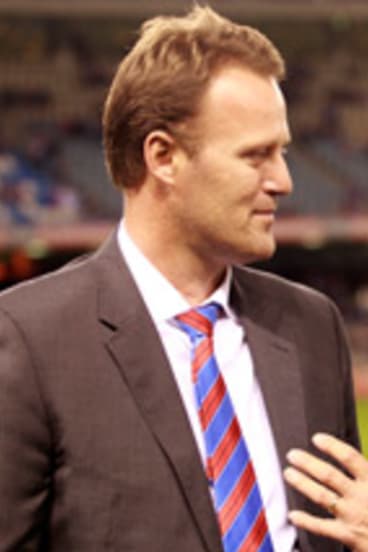 The additions of Taylor Duryea and Sam Lloyd, from Hawthorn and Richmond respectively, were important ones to bolster the relatively small cohort of experienced players at the club, according to Grant.

The club confirmed a total profit of $18 million for the financial year ending October 31, almost $16 million of which was derived from the recognition in the club’s accounts of the value of the freehold land assigned from the state of Victoria at the Whitten Oval precinct.

Gordon highlighted the relationship with the Andrews government as one of "enormous importance" to the club, re-affirming the Dogs’ commitment to play games at Ballarat, a deal also struck with the state Labor government.

Gordon was re-elected to the board on Monday along with fellow directors Mark Evans, Jerril Rechter and Levant Shevki.