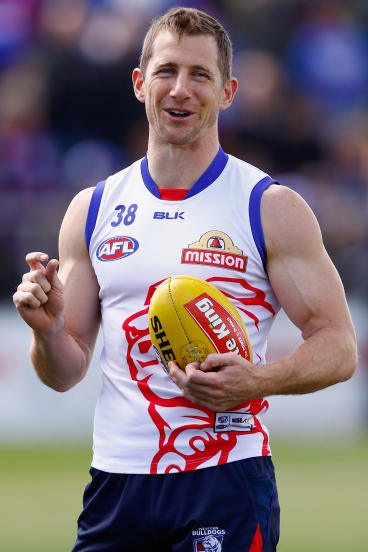 Dale Morris will return via the VFL.

Regardless of Friday night's result, the Western Bulldogs will be crossing their fingers and hoping premiership defender Dale Morris can make a successful return from injury via the VFL on Sunday.

The 35-year-old suffered a partial tear of his anterior cruciate ligament at training in February but avoided surgery.

The club and Morris are confident he can resume untroubled based on the experience of his former teammate, and now assistant coach, Daniel Giansiracusa, who had the same injury leading into 2009 yet played 115 games in the next six seasons and did not require a knee reconstruction.

Western Bulldogs’ coach Luke Beveridge admitted he will naturally carry some trepidation on Sunday when Morris plays against Werribee. However, he was also confident in the process the club’s medical staff and Morris had followed to return.

‘‘We will hold our breath a bit hopefully we get the right result and he gets through and we can consider him for AFL selection after that,’’ Beveridge said.

The fact the player in question is Morris, a weekend warrior who returned from a shocking broken leg to play in a flag with a fracture in his back, gives everyone involved cause for comfort.

‘‘He’s meticulous in the way he goes about his vocation really so – it’s not easier for him because it is still hard work – but he has done everything he can to physically prepare himself and obviously he is very strong in the mind,’’ Beveridge said.

Morris has played just 11 games since the flag to push his career tally to 241 games but Beveridge hopes he might be able to push his career beyond 2018, understanding his value to a young group attempting to move into contention again.

‘‘It is great we have been able to pursue this train of trying to get him back a bit earlier,’’ Beveridge said.

Meanwhile the Bulldogs’ main focus will be on beating the Crows in Adelaide for the first time since 2010 when the Crows played at Football Park.