Wests Tigers prepare for the next evolution of their roster

Wests Tigers have made a play for Manly centre Brian Kelly as the club spreads its reach into the Macarthur region in its quest to find the next generation of stars. 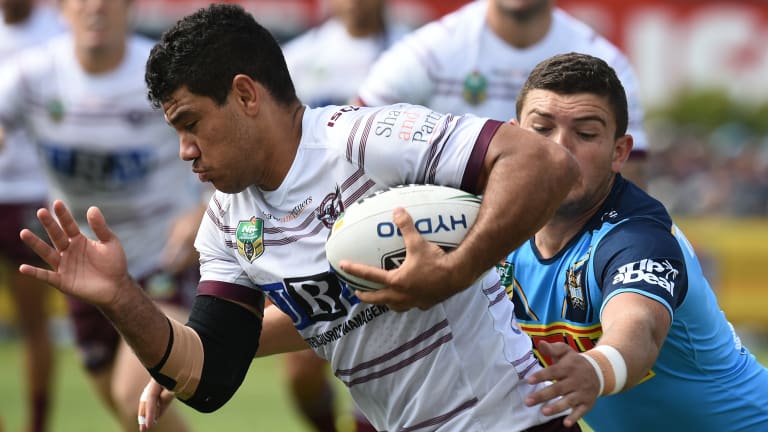 On the hunt: The Tigers are chasing Sea Eagles centre Brian Kelly.

The Tigers were the most active club in the player market in the off-season and they continue to focus on building their squad. To that end, they are scouring the market for a strike centre and fullback, with Kelly shaping as an option as the former. Kelly is off contract and the Sea Eagles will struggle to keep him due to salary cap concerns and interest from the Cowboys and Tigers.

The Tigers also have the cash for a marquee man to replace James Tedesco and are watching the market with interest. It’s understood Parramatta’s Bevan French and Cronulla’s Valentine Holmes are frustrated that they are not being given a consistent run in the No.1 jersey at their current clubs, while Canterbury is under mounting pressure to move players such as Moses Mbye given his back-ended contract has him earning about $1.9 million over the next two years. While Corey Thompson is currently doing a good job as custodian, Tigers officials are closely monitoring whether French, Holmes, Mbye or any other prospective No.1s become available.

The joint-venture outfit is also focusing on the long term and on Wednesday struck a landmark agreement with the Country Rugby League that will expand the club’s footprint into the Macarthur region. The partnership formalises the Tigers’ long-standing relationship with Group Six rugby league and provides a representative pathway for top talent.

It will also expose Macarthur to the Tigers’ NRL coaching and performance staff in what the parties believe is a win for the club and regional football.

Tigers CEO Justin Pascoe said the extension of the relationship would result in quality players provided a pathway to the NRL.

“Wests Tigers and the Greater Southern Region have always supported each other and it’s important for us to provide opportunities for players and coaches in our community,” Pascoe said.

“It was great to see our players in the Andrew Johns and Laurie Daley Cup competing as the Greater Southern Region Wests Tigers this year and it’s important for them to know that they are part of the Wests Tigers pathway.

“We’re happy to be extending and formalising our agreement with Country Rugby League and we look forward to working together to provide additional opportunities and resources for players and coaches throughout the region.”

The CRL has been in contact with Sydney-based clubs about formalising relationships with regional centres in a bid to boost bush footy and provide development pathways. The Tigers are one of the first to formalise such an arrangement, although Penrith is also a standard-bearer for such partnerships. The Panthers recently expanded their footprint into the western corridor in a deal they believe could be a blueprint for saving bush footy.

“It’s fantastic to see the Wests Tigers make this commitment towards supporting CRL’s representative pathways and it’s fantastic for the players and coaches to have a link with an NRL club in their region,” Felgate said.

“The introduction of the Andrew Johns and Laurie Daley Cups was a great success this season and much of that success is owed to the support from NRL clubs like the Wests Tigers.

“The extension of this partnership represents another step in the right direction for players, coaches and trainers throughout the region.”