Despite missing finals and performing below expectations, Essendon coach John Worsfold said the Bombers' season has not been wasted.

The Bombers' slim hopes of making finals were crushed when the defending premiers Richmond defeated them by eight points at the MCG on Friday night but Worsfold said recent performances showed they were not far away from the best teams.

Essendon won nine of their past 13 games with the losses in that period coming against Richmond twice, Collingwood and Hawthorn, but a slow start to the season that saw them lose six of their first eight games proved impossible to overcome.

Worsfold said plenty of positive steps had been taken despite their position on the ladder and he dismissed the suggestion the season had been a failure.

"Everyone can have their own opinion on what it is … we have worked extremely hard this year on bringing through some young players, on covering some injured players, on changing our game to become a team that is going to take on the best teams in the comp and win," Worsfold said.

"We've done a lot of good things this year. I would say the hard work is going to be rewarded so therefore hard work, passion and growth is not necessarily a waste.

"I challenge anyone to say that if you work your backside off it is going to be wasted." 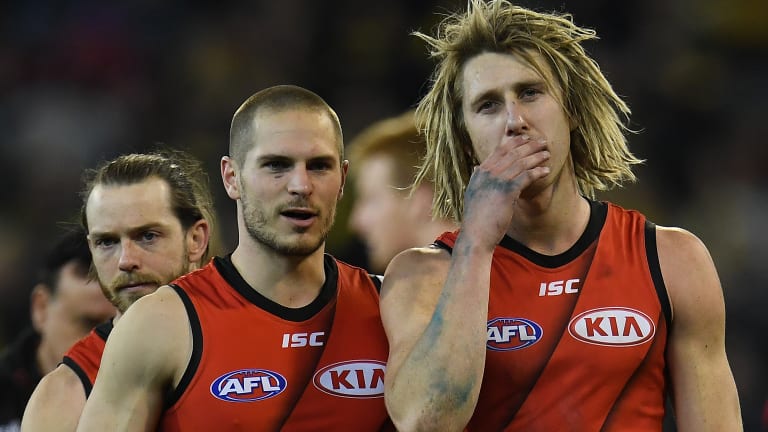 All over: (from left) Travis Colyer, David Zaharakis and Dyson Heppell, as Richmond ended their finals dream.

Worsfold said the Bombers' midfield had improved significantly throughout the season and he said the loss of Orazio Fantasia and Joe Daniher to injury was significant.

Daniher won't play this season after battling a groin injury while Fantasia has been ruled out too with a hamstring problem.

Aaron Francis, the Bombers' top 10 pick from the 2015 national draft, also played his best game for the club taking four contested marks and dominating in the air in defence.

Essendon will finish their season next Friday night in Adelaide when they play Port Adelaide.