The ACT Brumbies will record back to back profits for the first time in a decade on Thursday night, but they've got different sorts of numbers on their mind for growing the game in 2019.

The Brumbies will bank more than $50,000 despite crowds dipping to a record low this year as the Australian rugby public continued to grow frustrated with the sport's administration. 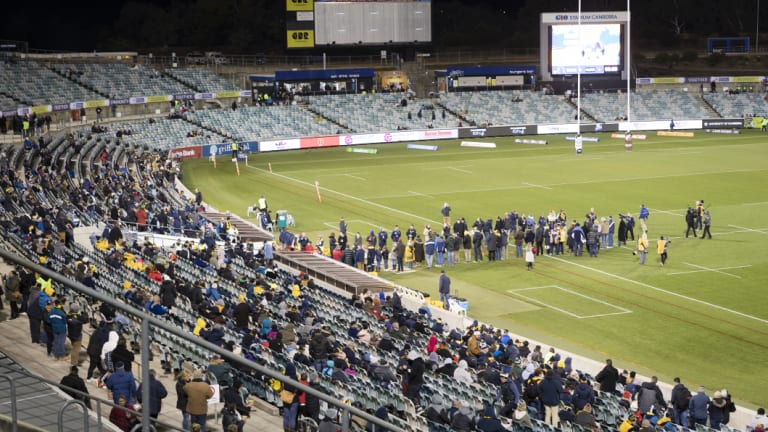 The Brumbies will launch new initiatives next year in the hope fans return to the stands.Credit:Sitthixay Ditthavong

Interim chairman Matt Nobbs says the club needs to "make some noise" about getting fans back to Canberra Stadium to help boost their bottom line even more.

Rugby Australia will help fund a marketing campaign in 2019 in the hope of reconnecting with fans and increasing crowd figures.

The Brumbies will appoint a new full-time chairman and a president at the ACT Rugby Union annual general meeting this week, where they will announce consecutive profits for the first time since 2007-08.

Nobbs is expected to stand for the chairman role as a the successor to Phil Thomson, who was shifted into the chief executive role in October.

There will also be a change of president, with Bob Brown stepping down to move interstate after a three-year tenure.

But the Brumbies' heirarchy have an eye on crowd figures already after Super Rugby attendances dwindled across the competition.

Australian teams haven't been helped by Rugby Australia and Wallabies woes. Australian coach Michael Cheika has survived the axe, but the fate of assistant Stephen Larkham is less certain as Rugby Australia searches for answers before the World Cup next year.

Australian rugby has struggled to connect with supporters in recent years, making the Brumbies' $50,000 profit a significant achievement after Canberra crowds dropped to their lowest level since 1996.

The Brumbies' averaged just 8391 fans per game at Canberra Stadium last season and the disappointing attendance figures set off alarm bells at the club.

Former chief executive Michael Thomson warned the club may cease to exist if low crowds continue, but Nobbs said they were working to reverse the trend.

"We can't control what's happening at Rugby Australia, but it is hard when the perception of the game isn't at an all-time high," Nobbs said.

"[We have] looked at crowds for next year. We have Friday night games next year and our draw, I think, is a better draw in 2019.

"The guys are trying really hard to try to [reconnect] with fans and members … We'll try a lot of different things next year. We've got to try, we've got to do what we can to [increase numbers]." 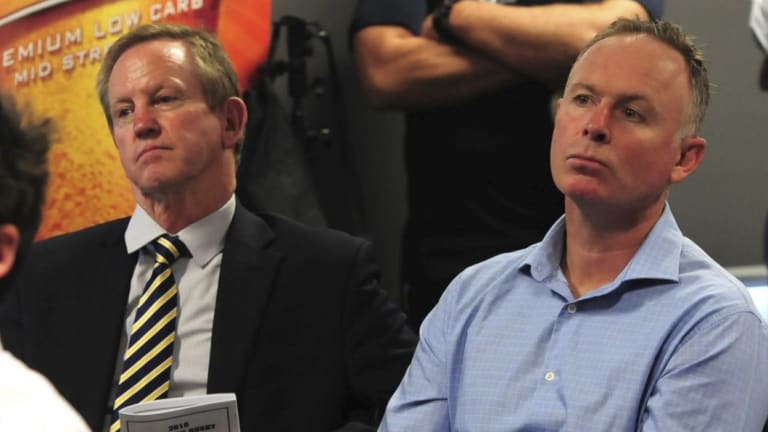 Bob Brown, left, is standing down as president while Matt Nobbs, right, is expected to be elected as Brumbies chairman.Credit:Graham Tidy

The Brumbies had an unexpected change of leadership this year when chief executive Michael Thomson resigned with a year left on his contract.

Thomson had been a calming influence at the Brumbies after a turbulent off-field period, which included losing more than $3 million between 2014-16.

Michael Thomson's departure led to changes in the board room. The board decided chairman Phil Thomson was the best man to replace Michael Thomson and Nobbs was elected interim chairman.

Nobbs is expected to retain the position at the annual general meeting, while Jim Shonk and Peter Johnson are the two nominations to fill the presidency vacancy.

Former Actew managing director Mark Sullivan and Steve Johnston have joined the board and another two directors are also expected to be re-elected this week.

"Michael steadied the ship and turned it around. The financial performance bucks the trend in Australia," Nobbs said.

"Community rugby is strong, participation has increased. For a small organisation, we punch above our weight.

"It's going to be challenging moving forward. Short term we've got to raise sponsorship dollars, long term we need to break that cycle. It's been the same cycle for 20-something years.

"We rely on sponsorship, television revenue and bums on seats, but we need to find some other buckets as well that can generate some income for us."

Phil Thomson was in Israel last week to meet with the Brumbies' major sponsor, Plus500, to discuss options to extend their partnership beyond 2019.

The Brumbies board will also wait until early in the Super Rugby season before starting negotiations with coach Dan McKellar about a potential contract extension.