What to Watch for in Saturday’s N.F.L. Wild-Card Games

A weekend bulging with N.F.L. playoff football begins Saturday, when for the first time three games will be staged on the same day.

The madness begins at 1:05 p.m. Eastern with an A.F.C. matchup in Orchard Park, N.Y., where about 6,700 fans, after assenting to coronavirus testing, will attend an event nearly as uncommon as a global pandemic: a Bills home playoff game.

Bills legend Frank Reich returns to Buffalo as a spoiler.

The second-seeded Bills will host the seventh-seeded Indianapolis Colts in the first postseason game at Bills Stadium since Dec. 28, 1996, another milestone in Buffalo’s enchanted season. But they’ll face a Colts team that’s led by Coach Frank Reich, who orchestrated one of the greatest playoff comebacks in league history when he quarterbacked the Bills to an overtime victory over the Houston Oilers after Buffalo had fallen behind by 32 points in a 1993 A.F.C. wild-card game.

This year, Reich’s Colts (11-5) had an unsettling tendency to collapse against good teams: They failed to score in the second half versus Baltimore, allowed 24 straight points in a loss to Tennessee and, in Week 16, blew a 17-point third-quarter lead at Pittsburgh. They did beat the Packers, though.

In guiding the Bills (13-3) to their first A.F.C. East title since 1995, quarterback Josh Allen threw for 4,544 yards and 37 touchdowns, both franchise records. Receiver Stefon Diggs, who is questionable for Saturday’s game with an injury to an oblique muscle, led the league with 127 receptions, the sixth most in a single season, and 1,535 yards.

If the Bills do have a weakness, it’s their run defense, which could benefit the Colts, whose rookie running back Jonathan Taylor rushed for 253 yards and two touchdowns in their Week 17 victory against Jacksonville. Only Derrick Henry of Tennessee has run for more yards since Week 11.

Will the Seahawks stick to the basics against the Rams?

Next up, at 4:40 p.m., is the season’s final installment of a delightful N.F.C. West rivalry, with the sixth-seeded Los Angeles Rams visiting Seattle for the second time in two weeks to face the third-seeded Seahawks. The Rams lost that Week 16 clash — and their quarterback, too. Jared Goff, recovering from surgery to repair a broken right thumb, may or may not be available to start. If he is not, John Wolford, who threw for 231 yards and ran for 56 in a Week 17 victory against Arizona that clinched a playoff berth, would start in his stead.

The Rams allowed the fewest points (18.5) and yards (281.9) per game in the N.F.L. this season, but they also didn’t score an offensive touchdown in the last two weeks. Entering the postseason with that offensive malaise is bad timing, but it might be surmountable, considering that Los Angeles has held Seattle to 36 total points in their two meetings this season while sacking Russell Wilson 11 times.

On pace at midseason to throw for 56 touchdowns, Wilson tossed only 12 over the second half of the regular season. Coach Pete Carroll, apparently unnerved by Wilson’s seven turnovers in losses to Buffalo and the Rams, resorted to a more conservative approach — for years the Seahawks’ formula — facilitated by a defense that stabilized after a dreadful start to the season: Since Seattle’s Week 10 loss at Los Angeles, no team has allowed fewer points.

Chase Young will try to keep Tom Brady from getting comfortable. 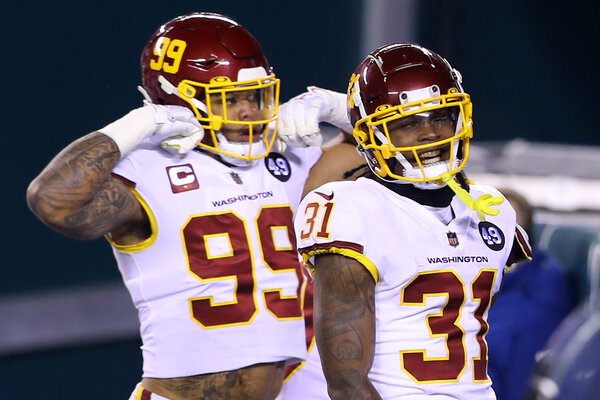 The final game of the day, slated for 8:15 p.m. between fifth-seeded Tampa Bay and fourth-seeded Washington, showcases two quarterbacks who, based on all good sense, should not have been doing what they did this season.

At age 43, Tom Brady threw for 4,633 yards, more than every quarterback but Patrick Mahomes and Deshaun Watson, and 40 touchdowns, tied with Russell Wilson and trailing only Aaron Rodgers, to lead the Buccaneers to their first playoff berth since 2007. Over the last four weeks, they have scored 148 points, the most in the N.F.C.

For Washington, Alex Smith — whose status is questionable, as he has a calf injury — returned from a horrific 2018 leg injury to morph from third-stringer to backup to starter and help the Footballers secure their first division title since 2015.

Smith’s on-field production, however, paled next to Brady’s, just one of the reasons this game has been touted as a mismatch. Brady is surrounded by an embarrassing collection of talent in Tampa Bay (11-5), from the receivers Antonio Brown and Chris Godwin to running back Ronald Jones to the rookie anchor at right tackle, Tristan Wirfs. Containing their offense should be a struggle for a Washington team that ranked 25th in scoring and 31st in yards per play, ahead of only the woeful Jets.

It should be a lopsided game unless the Footballers (7-9) can make Brady’s life miserable all night — a realistic outcome given the team’s extraordinary pass rush. Brady succumbed to pressure in each of his three Super Bowl defeats and, at his advanced age, isn’t the most elusive fellow. Washington defensive end Chase Young led all rookies with seven and a half sacks and 10 tackles for loss. By the end of the night, those numbers will very likely swell. By how much could determine the game’s outcome.