The two best matchups of the week were both rescheduled because of positive coronavirus tests — Patriots-Chiefs will played on Monday night and Steelers-Titans will be played in Week 7 — but Sunday managed to pack in enough action to help distract a league that is doing its best to avert a crisis.

Here’s what we learned:

Odell Beckham Jr. is a touchdown. He’s had injuries, a few minor off-field issues and he was a disappointment in his first season in Cleveland. But Beckham reminded the world of what he’s capable of in Sunday’s wild 49-38 win over Dallas. He caught a 37-yard touchdown pass from his fellow wideout (and former college teammate at Louisiana State) Jarvis Landry. He caught a 4-yard touchdown pass from Baker Mayfield. And with the Cowboys threatening late in the game, Beckham sucked all of the oxygen out of AT&T Stadium by running a sweep in which he narrowly evaded a tackle attempt by Aldon Smith deep in the backfield (see chart below) before slicing through the entire Dallas defense on his way to a 50-yard touchdown. If you squinted, you might have thought Beckham was back in Giants blue.

Cleveland is 3-1 for the first time since 2001 and next week Mayfield and Beckham will have a shot at getting the team its first 4-1 start since 1994 — a feat that predates the original team’s move to Baltimore.

Odell Beckham Jr. reached a top speed of 20.64 MPH on this 50-yard run, his fastest speed this season and 2nd-fastest as a member of the Browns.

OBJ was only expected to gain 2 yards according to our Expected Rushing Yards model.

The 2020 quarterback class is working out just fine. Joe Burrow (first overall pick, Bengals) became the first N.F.L. rookie to have 300 yards passing in three consecutive games — and got his first career win in the process. Justin Herbert (sixth pick, Chargers) went toe-to-toe with Tom Brady and the Buccaneers on Sunday, two weeks after nearly beating Patrick Mahomes and the Chiefs. Tua Tagovailoa (fifth pick, Dolphins) might be inching closer to some playing time after two more Ryan Fitzpatrick interceptions this week against Seattle and Jordan Love (26th pick, Packers) might not play any time soon, but his selection has seemingly inspired some brilliant play from a vengeful Aaron Rodgers. 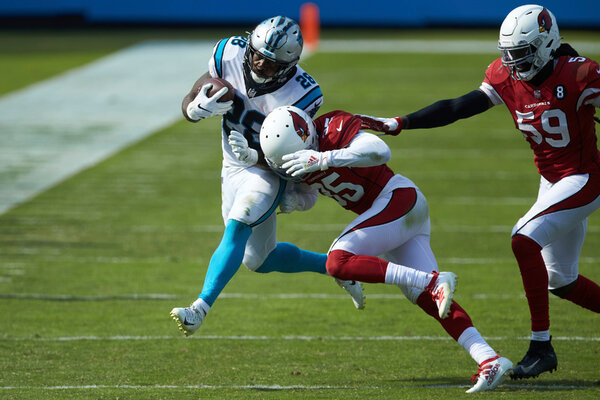 The Panthers are more than just Christian McCaffrey. Carolina was one-dimensional over the last few seasons, relying on the decidedly not one-dimensional McCaffrey to do nearly all the work. But with McCaffrey on injured reserve with an ankle injury, the Panthers have rediscovered their other players. Sunday’s win over the suddenly reeling Arizona Cardinals was powered by Teddy Bridgewater, who threw for two touchdowns, and ran in another — his first rushing touchdown since Dec. 20, 2015 — and running back Mike Davis, who rumbled for 111 total yards from scrimmage.

Russell Wilson and Dak Prescott are running out of superlatives. Between Wilson tying Peyton Manning’s record for passing touchdowns through four games (16) and Prescott becoming the first player to throw for 450 or more yards in three consecutive games, the young season has already provided numerous moments that required deep dives into Pro Football Reference’s Stathead database for any adequate comparisons. But while Prescott has an absurd (and record-setting) 1,690 yards passing through four games, his 1-3 record has him way below Wilson (4-0) as far as early consideration for the Most Valuable Player Award.

The spirit of Jameis Winston lives on in Tampa Bay. Last season, Winston kept Tampa Bay’s fans on an emotional roller coaster with 33 touchdown passes and 30 interceptions, and he broke a record that had stood since 1966 by having seven of his interceptions returned for touchdowns. Tom Brady has stabilized the team quite a bit in a 3-1 start to the season, and his five touchdown passes on Sunday powered a come-from-behind win over the upstart Los Angeles Chargers. But Brady also threw a pick-six in the first quarter, giving him an N.F.L.-leading two, already matching his career-high, which he set in 2001 and matched in 2015.