Patrick Reed has been waiting for his meal for a long time — 15 years to be exact.

On Tuesday, Reed, who won last year’s Masters, hosted his first Champions Dinner at Augusta National Golf Club in Georgia for past winners and Fred Ridley, the club chairman.

The dinners are private affairs away from the nattering galleries and clicking cameras — no spouses or media. They are held at the plantation-style clubhouse, inside the front door, 13 carpeted steps up the spiral staircase and to the right in what’s called the library, a cozy room with bookshelves, a fireplace, a bronze sculpture of Bobby Jones and a portrait of Clifford Roberts, a club founder, painted by President Dwight D. Eisenhower, who joined the club in 1948.

The Masters Club began the Champions Dinner during the 1952 tournament when the defending champion Ben Hogan gave a dinner for the previous winners. Hogan proposed the formation of the Masters Club, with its membership limited to Masters champions.

“I wish to invite you to attend a stag dinner at the Augusta National,” Hogan wrote in an invitation.

“My only stipulation is that you wear your green coat.” 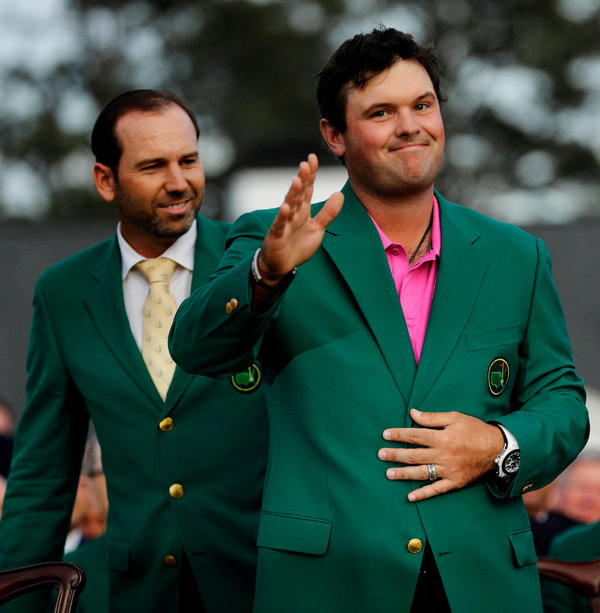 As part of the tradition, the defending champion selects the menu and hosts the dinner, where players in their green jackets mingle over drinks before dining, with views overlooking the back terrace, the practice putting green, the 18th green and the first tee.

Reed was ready with a menu he’s had in mind since he was a teenager.

“Oh, I knew that back when I was 13,” Reed, 28, told reporters at the Players Championship. “It was always a bone-in rib-eye, mac and cheese, creamed corn, creamed spinach. I’m going to fatten those boys up a little bit.

“I could eat a rib-eye steak for breakfast, lunch and dinner, and mac and cheese, same thing,” he said. “It was one of those things where it was a pretty easy decision, it was just kind of refine it a little bit and bring up options where if guys don’t want to eat something heavy they have a lighter option as well. I really just want everyone to enjoy the night and have something good to eat, no matter what it is.”

The menu did not surprise the three-time Masters winner Gary Player, who is from South Africa. “He clearly is a meat-and-potato kind of guy — seems fitting a Texan chose this meal,” Player said.

The meal choices often reveal something about the player: where they’re from, what they miss and what they simply really want to eat.

Some men are creatures of habit. Bubba Watson served the exact same menu in 2013 and 2015: Caesar salad, grilled chicken breast with sides of green beans, mashed potatoes, corn, macaroni and cheese, and cornbread.

“All interesting choices that made different statements based largely on personality, geography and the message they were sending to the other champions,” Player said. “The South African champions selected a typical braai or barbecue, for example, with some very good South African wines. The international winners love sharing their culture at the dinner, showing how the tournament has grown globally.”

Player selected his menus to show respect to all players and countries and to take note of how international the Masters has become.

Phil Mickelson, an American, picked paella in 2011, leaving some puzzled.

“I like when the guys bring their culture into the meal,” said Dave DiBenedetto, editor in chief of Garden & Gun, a Southern lifestyle magazine that also covers golf. “I was curious about Phil’s pick, but then I realized it was in honor of Seve Ballesteros.”

Ballesteros of Spain, a two-time Masters winner, was ill at the time and could not make the tournament that year. Mickelson selected a Spanish menu, including gazpacho, beef tenderloin with manchego cheese and tortilla, and Spanish apple pie with ice cream.

“Phil took the honor of picking his own meal and gave that honor to a friend who couldn’t be there because he was sick,” DiBenedetto said.

The meals are almost always prepared by the staff of the club kitchen, except for Vijay Singh after his 2000 win. The club permitted Singh to invite chefs from Atlanta, who imported ingredients from Thailand for chicken Panang curry, sea scallops in garlic sauce and Chilean sea bass with a chili glaze, served family style. After the meal, Singh brought the chefs to the dining room, where they received a standing ovation.

“It is always fun,” Player said. “Lots of jokes. Stories. I used to sit next to Bobby Jones and cut his meat as his hands were riddled with arthritis. Ben Hogan hated that it had become an autograph session.

“We always joke and laugh about the different menu choices, so yes we do notice,” Player said. “Some enjoy the different dishes the current champion selects, others choose to order something specific to fit their dietary needs, which is understandable.’

And if the night’s dinner selection isn’t appealing, players can always order off the menu. The turkey club is always a safe choice.