More than half a century before Boston goalie Tuukka Rask first stepped onto Finnish ice, Detroit staged one of its grandest banquets, a jubilant affair celebrating unparalleled sports excellence.

On Saturday evening, April 18, 1936, limousines chauffeuring a parade of stars arrived at the majestic Masonic Temple. There were Tigers, Lions and Red Wings aplenty, as well as the boxer Joe Louis, the boat racer Gar Wood, the Olympians Eddie Tolan and Dick Degener, the golfer Walter Hagen and dozens of other conquering athletic heroes.

Days earlier, Detroit had completed the sports trifecta, becoming the only American city to hold titles in three major sports at once. Within a seven-month period, its teams had won the World Series, the N.F.L. championship game and the Stanley Cup.

If the Bruins defeat the St. Louis Blues within the next 10 days, Boston will become the second city to accomplish the feat. (The Red Sox and the Patriots triumphed earlier.) It will undoubtedly inspire joyous revelry and endless Twitter boasting, but the achievement won’t carry the significance it did for the Motor City in the pre-television era.

Detroit grew phenomenally in the 1920s, crowding its downtown with skyscrapers and propelling its population to 1.5 million — 57 percent growth over a decade. Hundreds of thousands who came in search of jobs in the automobile industry made it America’s fourth-largest city.

Then the stock market crashed and the Great Depression sank its talons into the economy, bringing bank panics and closings, unemployment of 45 percent in the city, winding food lines, bulging public-relief rolls, and wage cuts for those lucky enough to still be working.

Times were dire, the outlook grim.

Amid such darkness, Detroit’s teams began to stir, and the city’s beleaguered residents fell especially in love. The Tigers and the Red Wings sparked passion and allegiance in 1934, with both teams advancing to their leagues’ championship series before losing. They soon chased glory again, this time joined by the year-old Lions, transplants from Portsmouth, Ohio. 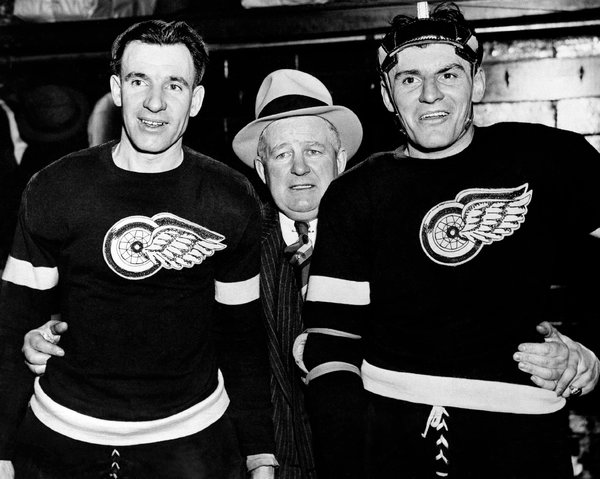 While sports as a salve for societal problems is surely overstated, Detroit’s teams provided a needed jolt of optimism and a dose of escapism.

The baseball team featured a Hollywood-worthy cast: a talisman-worshiping son of a onetime trapeze artist; a bench warmer who subsisted on bananas and doughnuts; and a 155-pound pitcher named for both a founding father and a Confederate president — Thomas Jefferson Davis Bridges. They were sons of miners, doctors and tobacco farmers, and they came from Dixie, Jersey, Texas and Michigan, from privilege and poverty. College fraternity brothers, elementary school dropouts and even a raised-by-the-streets orphan, they were whiskey guzzlers and teetotalers. Most smoked. Some liked to brawl, and some kept to themselves. Among them were Methodists, Baptists, Catholics, Lutherans, a Quaker, a Jew, and possibly an atheist or two.

There was someone for everyone, and fans got to know them well.

Newspapers ran photos of their families.

In any given broadsheet, you might find outfielder Gee Walker with his young sons; pitcher Schoolboy Rowe with Edna, his high school sweetheart; the devout Catholic Charlie Gehringer with his rosary-caressing mother; or Hank Greenberg with the batboy Joey Roginski, whose home Greenberg occasionally visited for a Polish dinner.

More important, in an era when being a professional athlete didn’t assure you a large paycheck, some of the men worked local off-season jobs, running service stations, peddling insurance and staffing department stores. They drank in neighborhood bars. They lived among their fans.

All endeared themselves to the city, and throughout their pursuit, they were hailed with confetti parades, dinners, gifts and train-depot welcoming parties numbering in the hundreds and thousands.

When the Tigers defeated the Chicago Cubs in the 1935 World Series, nearly half a million people flowed into downtown Detroit to revel in the conquest. They blocked avenues, packed beer gardens, halted streetcars, sang, drank, blew horns and banged trash cans. They partied as if the ’20s had come roaring back.

The eruption dwarfed even the exuberance of the inaugural Armistice Day.

Momentum continued to build as the Lions and the Red Wings flourished.

Professional football at that time rated far less popular than the college game, and faced an uncertain financial future.

The N.F.L. had nine teams sorted into two divisions, Eastern and Western. Some would be familiar to today’s fans: the Packers, Bears, Eagles, Lions, Giants. Others — the Brooklyn Dodgers, Pittsburgh Pirates, Boston Redskins, Chicago Cardinals — would disappear, change their names or move elsewhere.

This year’s Super Bowl attracted nearly 100 million viewers. It took place in February. In December 1935, when the Lions defeated the Giants for the championship trophy, fewer than 15,000 fans watched in person. There was no television. The contest, played in snow and mud at the University of Detroit’s stadium, was not a sellout. The winning players received a bonus of $300 each.

But the victory began a wave of flattering press coverage for Detroit — “a city of champions,” a Detroit Free Press editorial asserted.

The term — or versions of it — stuck, and took on greater significance when Louis, undefeated and awaiting his shot at the heavyweight belt, was named athlete of the year by The Associated Press. After the 1935-36 Red Wings defeated the Toronto Maple Leafs for the Stanley Cup, the adoration by columnists and fans only intensified.

The city was heralded for “supremacy in all major sports.” It was decreed to be “the sports capital of the world” by The Detroit News. One headline declared, “Whole Nation Cheers City’s Champions.”

Fueling the fervor was the fact that the championships of all three teams — Tigers, Lions, Red Wings — were the franchises’ first.

Bud Shaver, a Detroit Times columnist, observed, “A citizen of Rome, howling for Caesar when Julius was fighting at his best weight, couldn’t feel a fiercer pride in his hometown.”

And that celebratory banquet at the Masonic Temple brought a whole new round of tributes.

After all, it was, according to Hearst’s Detroit Times, “the greatest gathering of champions.”

Tom Stanton, an associate professor of journalism at the University of Detroit Mercy, is the author of “Terror in the City of Champions: Murder, Baseball, and the Secret Society That Shocked Depression-Era Detroit.”