Before Jerry Tarkanian built a college basketball powerhouse in Las Vegas, he was the coach at Long Beach State in the early 1970s and had two tormentors: John Wooden and his dynastic U.C.L.A. teams, and the N.C.A.A.

What irked Tarkanian for years, though, was the way the N.C.A.A. pursued him doggedly at every stop in his career yet seemed to have little interest in digging into all the favors a notorious booster did for U.C.L.A. players in the ’60s and ’70s.

“The N.C.A.A. is so mad at U.C.L.A.,” Tarkanian would quip, “they’re going to put Cal State Northridge on probation.”

The wheels of college basketball justice seem to turn no differently these days.

The latest example will be unfolding over the next couple weeks in a federal courtroom in Lower Manhattan, where two low-level operators, a would-be agent, Christian Dawkins, and a shoe company consultant, Merl Code Jr., will stand trial for bribery. Jury selection began Monday.

Dawkins and Code have already been sentenced to six months in prison after they were convicted last year of fraud for their part — along with the Adidas executive James Gatto — in a scheme that funneled money to recruits and their families in exchange for pledges to play at Adidas-sponsored colleges like Kansas, Louisville and North Carolina State.

The case is part of a broader federal investigation, built on F.B.I. wiretaps, that sent shivers down the spines of college basketball coaches two years ago when Joon H. Kim, then the acting United States attorney for the Southern District of New York, boasted that prosecutors planned to expose “the dark underbelly of college basketball.”

So far, though, the ones being punished are mostly minor players.

Assistant coaches at Auburn, Southern California, Louisville, Arizona, Oklahoma State, Texas Christian and Creighton have been fired. Several are looking at jail time. Dawkins, Code and Gatto have been convicted. And a financial adviser and another Adidas consultant have pleaded guilty.

But no top Adidas executives and only one head coach — Rick Pitino, who was fired by Louisville for an accumulation of delinquent behavior — have lost their jobs.

Far from having a chilling effect on college basketball, the scandal has devolved into an upside-down case in which the victims, at least in the eyes of the court, have been the universities and a group of elite coaches whom the prosecution has shielded, rather than exposed. 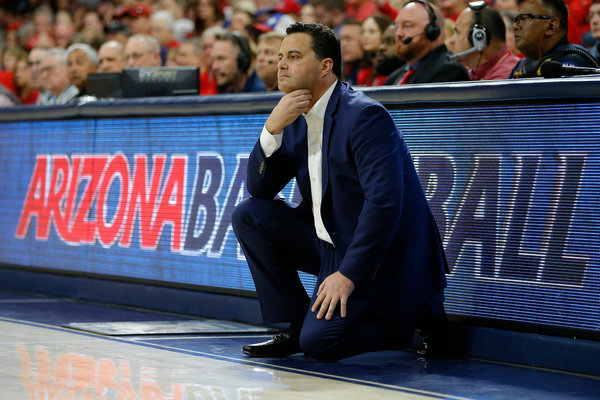 The latest example came quietly on Friday when Edgardo Ramos, the United States District Court judge who will preside over the bribery trial, granted a prosecution motion that will allow two head coaches, Sean Miller of Arizona and Will Wade of Louisiana State, whose conversations with Dawkins were wiretapped, to avoid taking the witness stand.

In asking Ramos to set aside the government’s motion, Steve Haney, a lawyer for Dawkins, said that the evidence “establishes very clearly that Sean Miller is paying players at Arizona,” and that there is “systematic cheating” taking place at L.S.U. and Arizona. Eli Mark, an assistant United States attorney, argued that putting Miller and Wade on the witness stand “opens the door to other extraneous issues.”

Ramos said he would revisit the issue if the evidence presented during the trial compelled him to do so.

But the ruling was a blow to Haney, himself a former college basketball player, who promised last month at Dawkins’s sentencing “to pull back the covers” on college basketball corruption and put a long list of coaches on the witness stand in this trial. “As many as I can get into the courtroom,” he said.

As Haney stood outside the courthouse on Friday, he maintained that he still has a strong case. But he was baffled by the prosecutors’ decision to go after ambitious but small-time operators like Dawkins and not head coaches or executives, saying that the evidence — which prosecutors have shared — was there to charge them.

“I can’t answer why the government charged who they did,” Haney said. “But I wouldn’t say they exposed the underbelly of college basketball with who they charged and who they didn’t charge.”

Paula Canny, who represented Greg Anderson, the former personal trainer for Barry Bonds, in the Balco drug case, said that typically the government follows the path of least resistance in these types of cases. Anderson spent three months in prison after pleading guilty to conspiracy and money laundering. He did additional time for refusing to testify in an unsuccessful perjury case against Bonds, who was originally targeted only as a Balco grand-jury witness.

“So much of it is statistic driven and all people care about is getting a conviction,” Canny said. “It’s easier to get a conviction against some guy who doesn’t have a ton of money, a ton of resources and a ton of power than against the powers that be who know this stuff is going on and tacitly allow it to continue.”

The same applies in the court of the N.C.A.A., which now uses court testimony to aid its investigations. In the wake of the indictments, it formed a college basketball commission headed by the former Secretary of State Condoleezza Rice, and the N.C.A.A.’s president, Mark Emmert, promised decisive action. “This is not a time for half-measures or incremental change,” Emmert declared when the commission was formed in 2017.

But 18 months later, it is hard to see what has changed. Two Auburn players, whose family members were accused of receiving money, were suspended last season, and a Kansas player was suspended this season. No head coaches other than Pitino have been removed, and no colleges have been penalized.

But last week, the N.C.A.A. did come down on Cal Poly San Luis Obispo for violating rules, placing it on two years’ probation and demanding it vacate the university’s only N.C.A.A. men’s basketball tournament berth. Its crime? Giving athletes too much money — in one case, $5 over the limit — for books.