Just for kicks I listened as Brodie Van Wagenen, the Mets’ general manager, went on about signing the oft-injured 35-year-old second baseman Jed Lowrie and reporters sounded entranced by his jive.

Have you, they asked, thought of bidding on outfielder Bryce Harper or infielder Manny Machado, the two young star free agents who improbably have attracted not much attention this winter?

Van Wagenen, a smooth-talking agent who has become a smooth-talking general manager, smiled genially. “Let’s be candid here,” he said. “The outfield is probably not our top priority at this point.” Jeff McNeil, a career minor-leaguer until last July, was going out to the outfield, Van Wagenen said, and “he gives us another really good weapon.”

That the Mets, a little market club hard by Flushing Bay, will play it cheap is a well-established fact. But Van Wagenen speaks the management palaver of choice this parsimonious winter. No one wants to spend money.

The Cubs, the Yankees, the Dodgers, the Giants, the Cardinals, the Braves, the Rangers and the Angels — all have apparently passed on making a bid for Harper and Machado. Each franchise is owned by a wealthy man (or family) in a wealth-laden sport and all could presumably find a place in the lineup for one of these young stars. And yet for the second season in a row, at a time of the off-season when the best free agents typically would have already signed handsome new contracts, most owners have tucked away their wallets and claimed to need no more talent.

Candidly, Van Wagenen’s reasoning for the Mets’ disinterest is good for a giggle. McNeil is a late-blooming minor league second baseman who in a few nice months in the majors hit three home runs and knocked in 19 runs. He’s a career infielder without a career to speak of.

Harper, by way of no comparison, last season hit 34 home runs, walked 130 times, scored 103 runs and knocked in 100. He is a former rookie of the year and league M.V.P., and he’s all of 26. To suggest you will pass on Harper in hopes that McNeil finds his outfield legs is — with no offense intended to the McNeil family — whacked.

Machado and Harper are not the only quality free agents left flapping in the wind. Dallas Keuchel, a good starting pitcher, and Mike Moustakas, a fine third baseman who hit 28 homers last year, have elicited little interest. Craig Kimbrel, that world champion Red Sox closer with 42 saves? Give him a call, he’d probably like to chat. Yasmani Grandal, the best catcher on the market, was expected to command a multiyear contract. He could scrounge up no better than a one-year, $16 million deal with the Milwaukee Brewers. 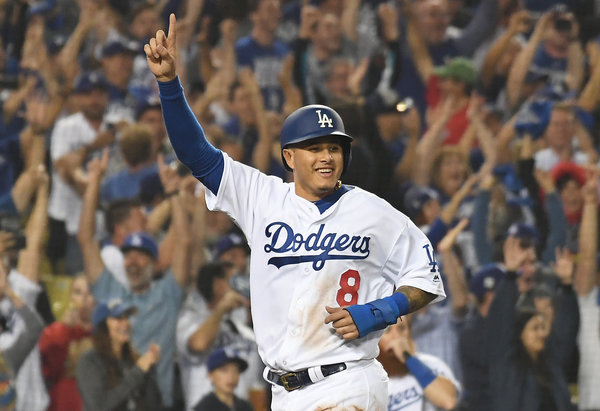 The Major League Baseball Players Association projects at least 12 of baseball’s 32 teams will start 2019 with a “substantially lower payroll” than 2018. Only four or five are expected to show a significant increase. “Players are well past ‘concerned,’” Bruce Meyer, the union’s director of collective bargaining, told me. “At a time when industry revenues and club valuations are growing for the second straight off-season, an alarming number of clubs are declining to compete for the many talented players.”

Major League Baseball officials claim to see no problem. The deputy commissioner, Dan Halem, helped negotiate the last collective bargaining agreement with the players union, and he says labor’s portion of nearly $11 billion in baseball revenues has held steady. His estimate includes players in baseball’s vast minor league system, though, none of whom are in the union and some fair number of whom — thanks to baseball’s lobbying with Congress — make less than the minimum wage.

Baseball drove down a road that looked suspiciously like this one between 1985 and 1987 and that ended in a multicar collision with three separate findings that its owners had engaged in illegal collusion to hold down player salaries. The owners paid penalties of $280 million plus interest to the players, and in the 1990s the sport weathered brutal strikes that owed to the residual bitterness.

The former baseball commissioner Fay Vincent, appointed by the owners and no Marxist, was moved at that time to remark to the owners: “The single biggest reality you guys have to face up to is collusion. You stole $280 million from the players, and the players are unified to a man around that issue, because you got caught and many of you are still involved.”

I possess no proof the current generation of extremely rich owners have acted as stupidly as their predecessors. For now the flaccid free-agent market is simply … odd.

The management of this column readily acknowledges the best of the marooned free agents will not be left to scratch nickels together. Harper seeks a contract north of $300 million for 10 years, and Machado entered free agency entranced by similar sugarplum visions. It is all but assured that one day their descendants will decant a fine Bordeaux and offer a heartfelt Thanksgiving toast to dear old grandpa Bryce and Manny.

And so what? Megawatt talents in many professions profit handsomely, a point lost on a writer from Bleacher Report who loosened an ancient grouse: These free agents are paid “silly” money to “play a children’s game.”

Yes, and playing pretend as a child can lead to movie stardom and an adolescent’s toe-shoed spin can lead to the City Ballet — provided you have great talent and a work ethic to match.

Baseball officials justify the new parsimony with a bow to analytics. We will not sign this or that star because we or some other team once paid out a bad contract. This player became too old, this one too slow, that one too bald, and the thought of a bad contract gives us a stomachache.

“General managers are extremely analytical, and they tend as a group to make the most efficient decisions possible,” M.L.B.’s Halem told me.

Six years ago, the Angels gave Albert Pujols a 10-year, $254 million contract and that indeed edged to frontiers of nuttiness. He was 32 when he signed it and already past his prime. His once-fabulous eye for balls and strikes slowly deserted him, and a man who once led the league in hitting has not surmounted .250 the past two seasons. With years to go, Pujols’s contract is a mothball special.

Harper and Machado are not Pujols. Each man is entering his golden prime and with a reasonable expectation they will produce at a high level for many seasons to come.

The owners have perhaps snookered a baseball union grown a touch complacent. They regularly manipulate the service time of young players, which works this way: Teams control players for six seasons before they become eligible for free agency. So clubs put thumb to scale and wait to bring up even their very best rookies players until late May or early June. This pushes back the rookie’s service time and saves the club many millions of dollars.

The difference when a player reaches free agency is grand. In 2015, Harper led the league with 42 homers and a .460 on base percentage and was voted the National League’s Most Valuable Player. He earned $2.5 million. Next year, he is likely to pull down close to $30 million.

The union has tended to tolerate service manipulations, figuring its members would recoup any lost money in free agency. Unlike football and basketball, baseball has no salary cap. It also has no floor, though, and now owners are squeezing players on either end like so many papayas in a juicer.

Baseball owners and the abacus boys would do well not to grow self-satisfied. Attendance took a decided drop last year, and the lack of a competitive market has set players in pro sports’ most powerful union to grumbling. Christian Yelich, this year’s National League M.V.P., stopped by The New York Times last week and said players are talking about the strange sloth in the free agent market.

“They’re two of the best players that we have in the game,” he said. “The process hasn’t played out.”

Last winter, amid another slow free-agent market, Dodgers closer Kenley Jansen tossed a high fastball at the chin of owners. “Maybe we have to go on strike, to be honest with you,” he said then.

Perhaps a knockdown pitch is the best way to wake up a team of complacent billionaires.