After tiptoeing around the issue, you come straight out and ask Corey Norman if he is a liability for St George Illawarra.

"I don't think so. I'm 28. I've grown up, I'm a totally different person and have moved forward,'' Norman tells the Herald. 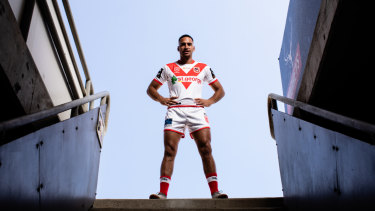 The big Red V recruit admitted a few Dragons supporters would have had their concerns when he left Parramatta and inked a three-year deal with the joint venture before Christmas.

"There's no secret about my history, and when it came out the Dragons had signed me, I've got no doubts there would have been some fans raising their eyebrows.

"But I've been squeaky clean and learned from my mistakes. That's the best thing about it.''

The Dragons' faithful would have known all about Norman serving an eight-match ban back in 2016 for a drug possession charge and his part in a sex tape scandal that involved vision of another person consuming drugs.

They would have also been aware he was fined $30,000 last year when the Eels discovered he had been drinking while injured.

When an old video emerged last month of Norman having a giggle as a 77-year-old man snorting a white substance emerged, the Dragons supporters, who are a bloody passionate bunch, would have almost been nodding their heads saying, 'I told you so'.

For the record, Norman said his dealings with 'The Chich' were limited to that one occasion more than two years ago.

The Gold Coast Titans were interested in luring Norman away from the Eels, only for his off-field reputation to cause a few club officials to go cold on the idea.

Norman, however, said those first dealings with the Dragons never focused on his past – and that trust and respect was what appealed to him.

Coach Paul McGregor tried to convince Norman to join the Dragons in 2016, so he was naturally delighted he did not knock him back a second time.

"It [my past] wasn't discussed and that was probably the most pleasing thing,'' Norman said.

"They didn't bring anything up like that. It was pleasing they hadn't dwelled on the past.

"[Football manager] Ben Haran and [recruitment boss] Ian Millward met me in Sydney. They spoke about where they see me at the club, where the club was going. Then Mary came up, I had spoken to him before, and he said, 'it's no secret I've wanted you before', and he was keen to get me on board.

"It all happened quickly. It was no secret I wasn't in Parramatta's plans. That was fine. It's football.

"I passed on the Dragons [the first time], but it had nothing to do with money.

"I was very comfortable at Parra. We were heading in the right direction. In 2017 we had a very good year, I was happy with where I was, and the club also wanted me there as well, which made it easier.''

Norman and Mitch Moses struck up an instant halves combination as the Eels went on a giant-slaying run in the second half of the 2017 season, and almost caused a boilover against the Storm in their own backyard in week one of the finals. 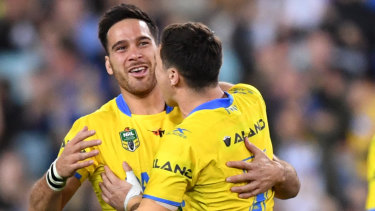 Growing pains: Corey Norman, left, seen here being congratulated by Mitchell Moses, failed to gel with his playmaking partner at the Eels last year after a spectacular start to their double act.Credit:AAP

Norman can not explain it. Nor could coach Brad Arthur, which is probably why he hauled the pair in at the end of the season and suggested one of them would be best off moving elsewhere.

It was never nasty. Moses was for a short time linked to the Broncos. But Norman always appeared the one more likely to leave.

After all, how on earth could his laid-back nature and love of fashion and a laugh – not to mention a smile that evokes memories of US comedian Eddie Murphy – complement Arthur's military-like intensity.

"I felt like I had let him down a bit. We had been through so much stuff before, and I didn't want to tell him.

"I don't know where those rumours come from about me and Brad,'' Norman said.

"I know how to push his buttons and get him going. But that's what he loves about me. I try to have a laugh. We have a good relationship, and it was hard to tell him I was going to leave.

"I felt like I had let him down a bit. We had been through so much stuff before, and I didn't want to tell him.

"We still have a good relationship. Once we had a chat, I was only at training another week.''

As for the Moses union, Norman said: "We're the same kind of players, we both want the ball. The weird thing is we get along well off the field, but our footy didn't connect. It didn't work between us. Sometimes that happens.''

Norman is one of the most exciting players in the game on his day. For all the Dragons' cynics, there will be just as many Eels supporters gutted he left.

The No.6 jersey is the one Norman would love to wear come round one for the Dragons. McGregor has plenty of handy options.

Norman's arrival allows Gareth Widdop to revert to fullback, a position he has played for England, while Norman is also no slouch at No.1.

One thing in Norman's favour is the fact he has spent time in the Broncos system with Dragons No.7 Ben Hunt. 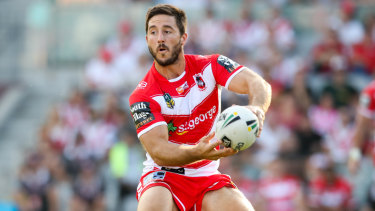 "He complements my game and brings out my running game,'' Norman said.

"Five-eighth is my favourite position. I like fullback, but I think I'm a bit slow and not explosive enough to play there.''

McGregor said of Norman: "Corey is a quality, experienced multi-skilled player ad he strengthens our squad from the previous season. He trains well and is a highly-competitive character.''

Norman has moved from Gladesville to the Shire. He catches the team bus with the Sydney-based Dragons.

His clothing label, YKTR, is about to launch a new activewear range.

There is a lot of excitement.

Dragons fans should feel the same about their new, matured larrikin.