Canberra Raiders young gun Nick Cotric’s Origin hopes hang in the balance after he limped off with an ankle injury, but it wasn’t the only drama in a fiery clash on Thursday night. 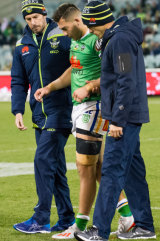 time a kick came his way.

The poor bugger doesn’t get, I don’t believe, the accolades he deserves.

The Sharks will be sweating on their star prop Andrew Fifita, who sparked a melee with a flop on a prone Aidan Sezer and was also put on report for a crusher tackle on Ryan Sutton. Cronulla lost centre Bronson Xerri, who only managed 25 minutes before failing a head injury assessment.

Queensland prop Josh Papalii was in everything in his opening 30-minute stint, charging for 117 metres and finishing the game with 177m. With all the talk about NSW’s halves for Origin II, Fittler would have taken notice of both the Raiders playmakers. Sezer opened the scoring with a dummy and a right-foot step.

Then Wighton kicked into overdrive to stake his claim for the Blues No.6 jersey. Undaunted by his Origin I intercept, he threw a beautiful cut-out pass for his captain Jarrod Croker to tip on for Bailey Simonsson to dive in.

Then he went short for Croker to charge through. That put the Raiders up 20-0 after 22 minutes.

But with a returning Shaun Johnson finding his rhythm and Wade Graham enjoying a running battle with Raiders back-rower John Bateman, the Sharks mounted a comeback. 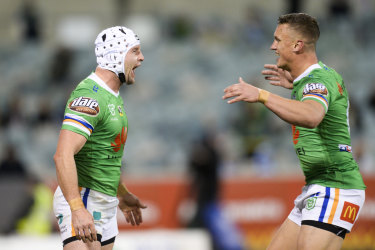 Man of the moment: Jarrod Croker, left, celebrates with Jack Wighton after Wighton laid on his record-equalling try. Credit:AAP

Halfback Chad Townsend grubbered in behind for Josh Dugan to score, and they were in again before the break when Josh Morris pounced on a loose ball to charge over and make it 20-8 at half-time.
Sharks prop Braden Hamlin-Uele burst through almost untouched and then Dugan took advantage of numbers to score his second against his old club.

Croker stepped up to nail a 35-metre penalty goal for the lead, before producing a late intercept to seal a tense victory.

It was a record-breaking night for the veteran centre, whose first-half try equalled Raiders great Jason Croker as the club’s all-time leading tryscorer (120 tries).

It came on the same night the Canberra captain also equalled Laurie Daley as the club’s second-most capped player with 244 games.

Jason Croker has played the most games with 318.

Croker’s personal 14-point haul also moved the Raiders’ all-time leading pointscorer to the top of this year’s pointscoring table with 124.

‘‘The poor bugger doesn’t get, I don’t believe, the accolades he deserves,’’ Raiders coach Ricky Stuart

said of Croker. ‘‘He won that game tonight on his goalkicking, to be quite honest.

‘‘He kicked some great goals there tonight, one very good goal from the sideline. If he doesn’t kick those, we don’t win.’’

Sharks coach John Morris said the slow starts have been a trend this year.

‘‘I was happy we found a way to fight back but really disappointed with our start. We haven’t been starting well all year, actually,’’ he said.

‘‘We’ve won most of our games from behind. Certainly coming down here to Canberra of all places, you want to get off to a good start against a quality team.’’