ALBANY — To protest the absence of his star player Napheesa Collier from the recent list of finalists for the Naismith Trophy — awarded annually to the country’s best college basketball player — the UConn women’s coach Geno Auriemma invoked … James Naismith himself.

“Dr. Naismith is rolling over in his grave,” Auriemma said this week. “He is. He never envisioned that somebody that good would be left off his list.

“I feel bad for her,” he said of Collier. “If she played at any other school, she’d be the front-runner with the numbers she puts up. But she plays at Connecticut, so what are you going to do?”

Auriemma’s theory, that Collier’s omission is part of a backlash to a generation of UConn dominance in women’s basketball, is bolstered by a series of decisions made this month. The Huskies, despite a 31-2 regular-season record and a win over the defending national champion, Notre Dame, received a No. 2 seed in this year’s N.C.A.A. tournament. It was the first time since 2006 the Huskies were not a top seed in a region.

But it was the rejection of Collier from the Naismith Trophy’s final four — Asia Durr of Louisville, Megan Gustafson of Iowa, Sabrina Ionescu of Oregon and Teaira McCowan of Mississippi State — and a similar snub for the Wade Trophy, the national player of the year award given by the Women’s Basketball Coaches Association, that surprised Auriemma and others. 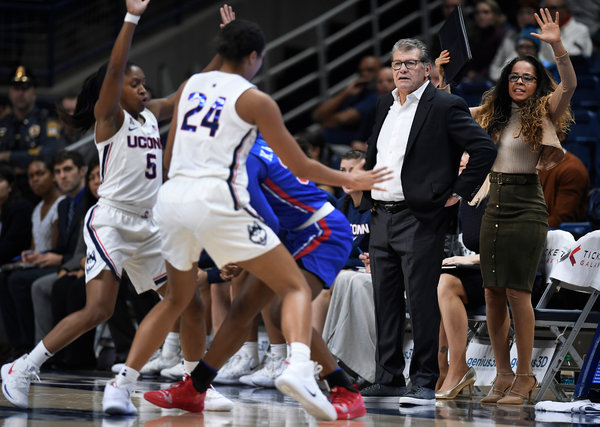 Rebecca Lobo, the former UConn star and current ESPN commentator, is a past winner of both awards. She is also a Naismith voter, and said she had Collier on her ballot. When asked whom she considered the best player in the country to be, Lobo said: “Gustafson has had the best season, I think. But that doesn’t make her the best in the country.”

By virtually every measure imaginable, a case can be made that that honor belongs to Collier, a senior from O’Fallon, Mo. In win shares, for instance — the advanced metric that seeks to quantify the number of wins a player produces for her team — Collier ranks just ahead of Gustafson for the most valuable player in the country this season. It is this kind of catchall statistic, Collier’s defenders argue, that best expresses her value. Because while her UConn statistics are impressive — 21.1 points and 10.7 rebounds a game — she does not lead the nation in any individual category.

Indeed, it could be that Collier’s versatility hurt her with some voters, even though it makes her so important to Connecticut (33-2), which faces sixth-seeded U.C.L.A. (22-12) in the N.C.A.A. tournament’s Albany Region semifinal on Friday night. As one W.N.B.A. general manager put it, Collier is “the most turnkey” of the top prospects in the 2019 draft, which will be held on April 10.

McCowan is the classic rim-protecting center. Gustafson is the old-school post scorer. Ionescu is the playmaking point guard. Durr is the two-way shooting guard.

Collier? She does everything. She’s 6-foot-1, and Auriemma uses her to guard opposing centers at times, sends her out to face-guard wings and even some guards. Despite this steady diet of the best that opponents can throw at UConn, she ranks 92nd out of 733 qualified players in defensive points per possession allowed, at 0.665, ahead of every player on the Naismith and Wade award lists. She has posted a steal percentage above two and a block rate of nearly 5 percent.

And she has done all this at the defensive end while ranking second in the country to Gustafson in offensive points per possession, with an assist percentage (21.5) more befitting a point guard, a rebound rate 120th in the country among 3,393 Division I players and a turnover percentage of only 11 percent, reflecting a decision-making process that has W.N.B.A. teams salivating over the chance to add her. One front-office executive labeled her the “best bigger player in the draft.”

Collier did not hide her surprise over the snubs, but said she would continue to strive to achieve goals that are measurable and within her control.

“Yeah, I thought it was crazy, but I don’t need people voting to tell me I’m the best,” Collier said. “I know I am. Kobe Bryant only won one M.V.P., so that shows the best player doesn’t always win. And to be honest, right now I’m focused on something they can’t vote on, which is winning a national championship.”

Coach Jeff Walz of Louisville (31-3), a No. 1 seed that will face fourth-seeded Oregon State (26-7) in the region’s other semifinal on Friday night, echoed his friend Auriemma’s incredulity at the lack of respect for Collier.

Walz has an elite player of his own in Durr, and her potential matchup against Collier in the region’s final on Sunday is intriguing. If it happens, it can either serve as affirmation of Durr’s place on the Naismith and Wade lists or even more evidence that Collier belongs there.

But to Auriemma, the fact that UConn is even in a position to play in such a game was largely because of Collier.

“Can you imagine how many games we’d win if we didn’t have her?” Auriemma said, adding: “I mean, you talk about who means a lot to their team. I don’t know anybody who means more to their team anywhere in the country than Phee. I can’t imagine.”