When West Coast traded their first round pick from this year's draft to the Gold Coast during last year's trade period, external observers thought they had gone mad.

The Eagles' rationale, to build some depth to a squad that had lost experienced quintet Matt Priddis, Sam Mitchell, Sam Butler, Sharrod Wellingham and Drew Petrie, was sound enough. 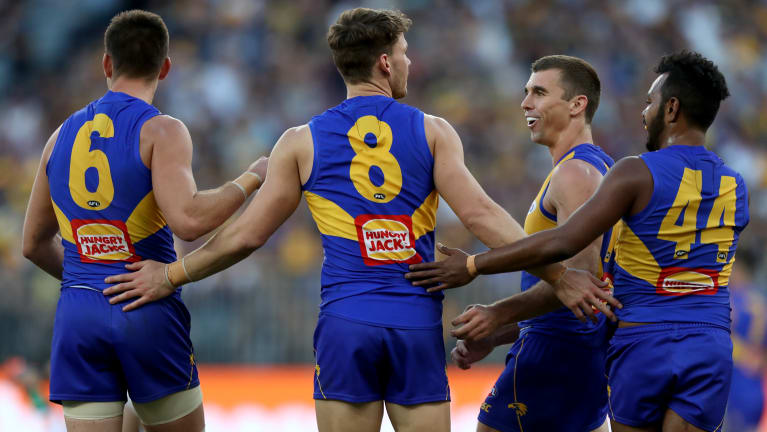 The Eagles are set to do well from their trade of future picks.

But to load up with second round picks in the 2017 national draft, which conventional wisdom had declared to be a lottery beyond the top 10, and therefore eschew the first round pick in the highly-rated 2018 draft seemed dangerous.

The first-round pick they sent to the Suns is, at present, selection 18, just four spots ahead of the future second-round pick they received in the transaction from the Suns.

With the three picks they received in exchange the Eagles added much needed depth, picking Oscar Allen (pick 21), Liam Ryan (26) and Jack Petrucelle (38).

Allen is the only one of those three yet to debut, with Ryan sensational in the first three games until he hurt his ankle against Geelong and the speedy Petrucelle playing well in two games before losing his spot when another recruit, Brendon Ah Chee, returned from injury.

The West Coast trio haven't played a significant role in the surge back up the ladder but their presence on the list allows the Eagles to continue to contend and build simultaneously.

The Suns grabbed academy cult figure Brayden Crossley with the pick they earned from the Eagles and should still get a handy player with the first-round pick that softened the loss of pick No.2 for Lachie Weller in last year's draft.

However any pre-season hopes the Suns had of landing another top 10 pick have rapidly disappeared.

Even with 13 games remaining, the situation isn't likely to change much with the Eagles unlikely to drop far below a top four finish and Suns likely to miss the eight again.

The projected outcome of the transaction is also a reminder that trading future first-round picks is a "winners are grinners" lever within an otherwise socialist, equalising system, pump-priming seasons in one direction or another for those brave enough to trade future picks.

After all Collingwood's Adam Treloar cost the Magpies top 10 picks in successive seasons, exacerbating the effects of a poor season while the Eagles are likely to get a bonus for a good season.

Geelong has had less to lose in trading future picks than Carlton might have in recent seasons as both have been anchored at either end of the table and future trading has sped up the Giants' merry-go-round of trades with more liquidity in the market enabling go-home trades.

But that's a bigger picture issue, hardly relevant to the Eagles, who now appear in front, their unconventional thinking in all sorts of strategic areas taking them to the top of the ladder and giving them a nice draft bonus to boot.