The regular season is over, and the quest for the 2019 Stanley Cup begins Wednesday.

The winners and losers as the playoff matchups got settled:

Winner – Boston Bruins. They've ousted the Toronto Maple Leafs their past two postseason meetings with impressive third periods in Game 7. The Maple Leafs, who added John Tavares and Jake Muzzin, are deeper since then, but they stumbled down the stretch.

Loser – Columbus Blue Jackets. Coach John Tortorella faces the team that he once led to a Stanley Cup, but his Blue Jackets haven't figured out the Tampa Bay Lightning this season, going 0-3 and being outscored 17-3. That was before they beefed up at the trade deadline, but if they go out quickly, it might be difficult to hang on to their handful of key free agents.

Winner – Lightning forward Nikita Kucherov. The NHL leading scorer and likely MVP feasted on the Blue Jackets this season, with four goals and five assists in three games. The Carolina Hurricanes could have been the first-round opponent if they had lost on Saturday, and they had held Kucherov without a goal.

WHO WILL BEAT THE LIGHTNING?These five teams can upset Tampa Bay 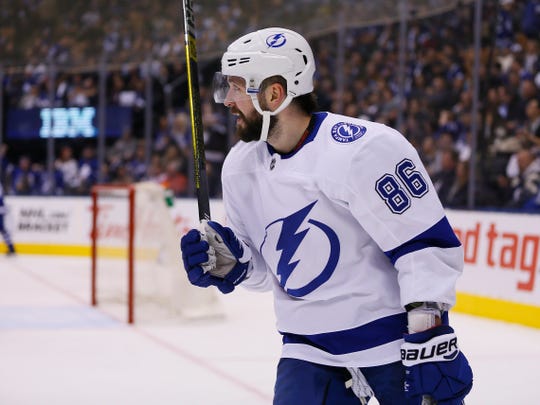 Loser – Hurricanes. They reached the playoffs for the first time since 2009, and their reward is the defending Stanley Cup champions. The Washington Capitals swept Carolina this season, including in back-to-back games last month.

Winner – Dallas Stars. Goalie Ben Bishop returned from an injury and shut out the Minnesota Wild in the season finale. It was his seventh shutout of the season. The Stars will need Bishop (1.98 goals-against average, .934 save percentage) to be on top of his game if they are to get past the Nashville Predators.

Loser – Vegas Golden Knights. They have lost seven of their last eight games and looked to catch a break by playing the equally struggling San Jose Sharks. But the Sharks won their last two games and got defenseman Erik Karlsson back in the lineup.

Winner – NHL fans. The Pittsburgh Penguins held on to the third spot in the Metropolitan Division and won't have to face the Capitals in the first round. That sets up (if Washington wins) an intriguing second-round series of either the Penguins-Capitals rivalry or the Capitals facing the New York Islanders and their former coach, Barry Trotz. Plus, the Penguins-Islanders series will be entertaining in the first round.

Loser – NHL fans. No Connor McDavid in the playoffs for the second year in a row. There's plenty of star power in the playoffs and he might have been out anyway with an injury, but the Edmonton Oilers need to figure out a way to build a team that gets the NHL's best player the exposure of postseason appearances.