What can you say about the Winx factor? The wonder mare simply wows everyone.

A sun-kissed Flemington had a record crowd of more than 22,000 for Turnbull Stakes day on Saturday, the afternoon when the spring carnival traditionally hits top gear. 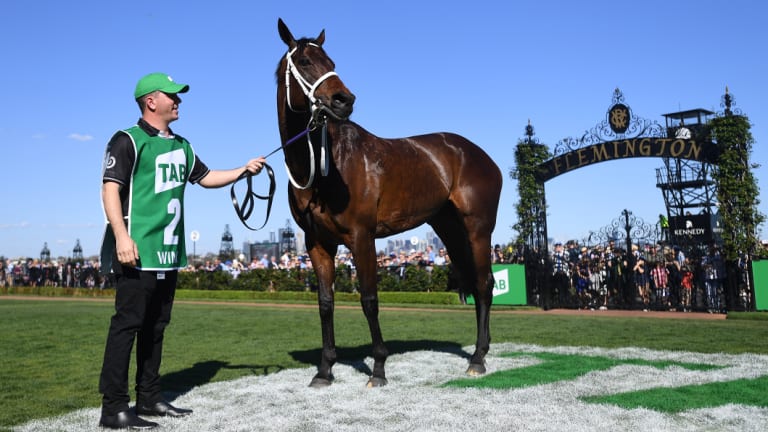 Super mare: Winx in the mounting yard after her win on Saturday.Credit:AAP

But a large number of that record total would have been first-timers at the track or infrequent visitors to a racecourse.

The reason they were there? To see the equine marvel, the closest thing we have to athletic perfection. With the Valley a sellout and this likely to be Winx's last Melbourne spring, the incentive to get to Flemington was high.

The lesson from the crowd, the numbers that turned up and the joy, pleasure and sheer admiration they showed for this great champion should not be lost on racecourse marketing executives and the sport as a whole. It's a lesson Black Caviar gave half a decade ago.

If racing people are worried about falling attendances they should realise that the horses need to be made the stars of the show. Marketing should focus on them, and to a lesser extent the jockeys. They will attract not just punters but newcomers to the track.

Black Caviar did it, and so does Winx. It's a far better way to sell the sport than as it so often is promoted these days, as an all-day drinkathon or as a pick-up joint, a sort of high-colour, daytime nightclub with the racing merely as a backdrop.

And like the queen that she is, there was plenty of drama involved as she sat out at the back of the field before delivering her late and ruthless challenge to see off a strong group of rivals containing several previous group 1 winners.

There were plenty holding their breath as jockey Hugh Bowman stuck to the inside for most of the race. At times it looked as though she might not be quite as dominant as she has been in the past, and certainly not as she was in this race last year when she scored by more than six lengths.

As the leaders quickened off a steady opening pace the task became greater. Bowman didn't panic, and eventually the gaps came. She took her runs and, after causing palpitations in several thousand hearts, she eased down in the final strides. 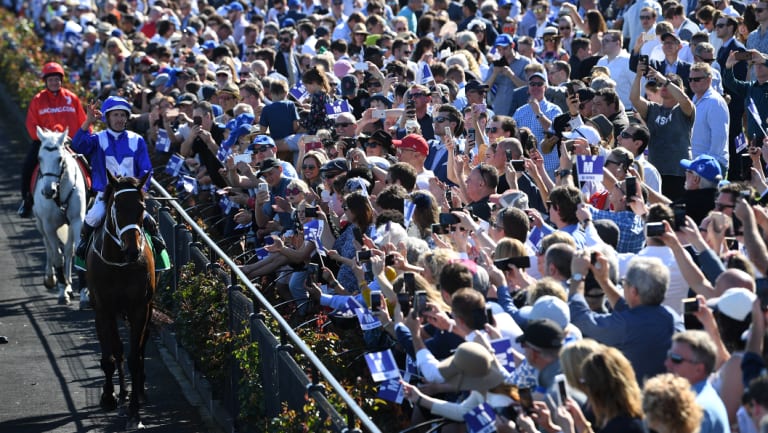 People packed in to see Winx on Saturday.Credit:AAP

That is how it is for champions. They can sometimes make it look easy, but a true test of their greatness is when they conquer less than ideal circumstances.

Winx wasn't under intense pressure on Saturday. Bowman never picked up his whip and had to use it vigorously to encourage her, but she did have to work harder than in some previous races.

As her trainer Chris Waller said, the manner of victory, weaving her way past a wall of rivals, was reminiscent of the victory she posted in the Doncaster in April 2016 when she confirmed to anyone who still had doubts after her astonishing Cox Plate win six months earlier that she was something extra special.

Winx has star quality, presence, and an ambience that surrounds her.

She excites admiration, affection and respect from those who watch her and appreciate a wonderful racehorse. She draws love from those closest to her, those who work with her every day, see her regularly and monitor her every movement.

The arguments about how good she really is can rage, with the knockers saying she is not a true great unless she ventures overseas, as Black Caviar, her closest parrallell, did.

But those are hollow. Few horses have the longevity of Winx (she is now winning at group 1 level for the fourth successive season), nor the versatility – she has won in elite company at distances ranging from 1400 metres to 2200 metres. She has triumphed right handed and left handed, on good or heavy tracks, when ridden handily and when she has come from the back, when she has been covered up on the rails, or when she has circled the field and been ridden, as Bowman puts it, ''arrogantly''.

He couldn't ride her that way on Saturday, but she still got the job done superbly. And one glance at the sectional times tell you just how quickly she was travelling as she ran down the front runners.

That is travelling. And that sheer speed is what makes her stand out. Catch her while you can.