SAN DIEGO — Though Tiger Woods grabbed most of the headlines at the Tour Championship in September, with a victory that ended his five-year drought, it was Justin Rose who left the event — the finale of the FedEx Cup playoffs — with a $10 million bonus for winning the season-long points race.

Rose also moved to No. 1 in the world that weekend in Atlanta, passing Dustin Johnson.

Over the past few days at the Farmers Insurance Open, his second PGA Tour event in 2019, Rose has demonstrated why, after trading the top ranking several times with Johnson and Brooks Koepka, he came into this tournament at No. 1.

Despite two double bogeys and a closing bogey during Saturday’s third round, Rose shot a three-under-par 69 on the South Course at Torrey Pines to maintain a three-shot lead heading into Sunday’s final round. His 54-hole total of 18-under 198 tied a tournament record, as had his 36-hole total of 15 under. 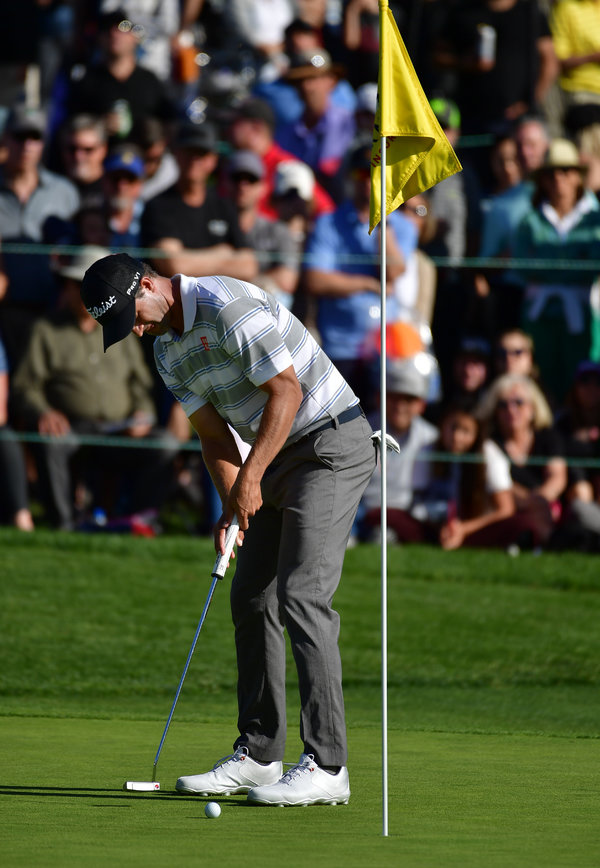 Woods, 43, struggled with his iron play on Saturday and needed three birdies in his last five holes to salvage a one-under 71 for the day. At five under for the tournament, his first competition of the season, Woods remained in a tie for 48th.

Rose, 38, attributes his surge in the world rankings to improved putting over the last year. In 2018, he won the Fort Worth Invitational at Colonial, tied for second in the British Open at Carnoustie and had two second-place finishes in the FedEx Cup playoffs: at the Dell Technologies Championship near Boston and the BMW Championship near Philadelphia, where he lost in a playoff. He has won five times around the world since October 2017.

“My game’s just gotten better all around,” Rose said. “I think I worked on my weaknesses the last couple years, and the putting’s been better, which I think is ultimately producing more top 10s and more wins. My ball-striking, I’ve always regarded as a strength of mine. It’s always been pretty much decent enough for me to contend week in and week out.”

Rose led by as many as six shots after a birdie on the par-5 13th hole, where he narrowly missed his second eagle of the day, then gave two shots back when he pulled his 7-iron approach into the hazard left of the 14th green on the way to a double-bogey 6. He had already made a double-bogey 6 on the 488-yard, par-4 fourth hole, where he also pulled his approach shot into a hazard left of the green.

On the par-5 18th, he debated whether to lay up with his second shot before hitting a 3-wood into the greenside water hazard, which led to a bogey 6. Those mistakes were offset by six birdies and an eagle on the 615-yard, par-5 No. 9, where he reached the green with a 285-yard 3-wood and rolled in an 18-foot putt.

“I made a couple of mental errors, trying to force it too far out of a bunker on No. 4, and then 18 was similar,” Rose said. “Hindsight’s wonderful. But I’m really more pleased with how I responded to those occasions and rebuilt the round going forward.”

Woods’s stated hope of having a “special weekend” and playing himself into contention at one of his favorite courses evaporated quickly during his early-morning round. He did not make a birdie until No. 17, his eighth hole, and made birdies on Nos. 5, 8 and 9 on his inward nine to offset bogeys on No. 1, where, with a pitching wedge, he hit into a greenside bunker, and on No. 3, where he three-putted from 28 feet.

“I finally drove it good and didn’t hit my irons very close,” Woods said. “And again, I had a bunch of close calls on putts that just didn’t go in. I’d like to do something positive. If I can get to double digits under par, that would be a nice way to end the week.”