With a Flurry of Shots, Dirk Nowitzki Wraps Up His Time in Dallas

DALLAS — Dirk Nowitzki’s final N.B.A. game will take place in the same city — San Antonio — where he played what he considers the most important game of his life as well as what many rank as the best game of his career.

Wednesday’s date with the San Antonio Spurs is suddenly poised to be recorded as the final outing of Nowitzki’s 21 seasons with the Dallas Mavericks — thanks to the retirement announcement he sprang on the American Airlines Center crowd after Dallas’s 120-109 victory Tuesday night over the Phoenix Suns.

After scoring a season-high 30 points, albeit on 31 shot attempts, Nowitzki punctuated a postgame ceremony arranged to honor his long and decorated career by announcing that he is indeed retiring from the sport.

“As you guys might expect, this is my last home game,” Nowitzki told the fans, finally addressing his future after trying to dodge questions on that topic all season in a futile attempt to avoid a so-called farewell tour.

The Mavericks’ regular-season finale on the Spurs’ floor thus provides Nowitzki with a serendipitous opportunity to go out where he broke in. It was a 33-point, 14-rebound performance in the 1998 Nike Hoop Summit Game in San Antonio as a 19-year-old that, in Nowitzki’s words, “literally changed my life,” convincing Dallas that it had to do anything it could to draft the little-known German.

Nowitzki, 40, went on to overcome a string of playoff disappointments and lead the Mavericks to the only championship in franchise history in 2011. His 21 consecutive seasons with one team is an N.B.A. record — and the 37 points and 15 rebounds he delivered against the five-time champion Tim Duncan in Game 7 of the Western Conference finals in San Antonio in 2006 is widely regarded as his most complete single-game performance.

As the game’s sixth career leading scorer with 31,541 points, Nowitzki is often described as the best European import in N.B.A. history and credited with ushering in the modern era of power forward play in which players of all sizes were not only encouraged but expected to shoot proficiently from long range.

“He’s our Roger Staubach,” said the longtime Mavericks General Manager Donnie Nelson, who did the loudest lobbying to persuade his father Don, then the Mavericks’ coach and general manager, to make any maneuvers necessary to select Nowitzki in the 1998 draft.

Mark Cuban, the team’s owner, announced recently that the reluctant Nowitzki was getting an ornate send-off against the Suns “whether he wants it or not.” The Mavericks duly arranged for five of Nowitzki’s favorite players growing up — Charles Barkley, Scottie Pippen, Shawn Kemp, Detlef Schrempf and even Larry Bird — to fly in, stay out of public view during the game and then emerge to take part in the ceremony. 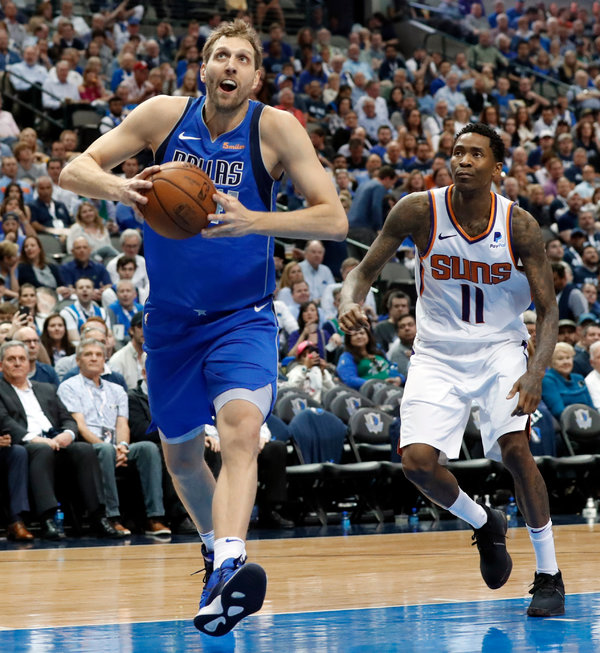 The game itself, predictably, was also all about Nowitzki, with teammates, particularly the league’s rookie of the year favorite, Luka Doncic, feeding him incessantly as fans bayed at him to shoot at every opportunity.

Before tipoff, Nowitzki jokingly asked a team staffer to look up how many shots Kobe Bryant took on the way to scoring 60 points in Bryant’s farewell game in April 2016. Informed that Bryant hoisted 50 shots that night, Nowitzki conceded that he very likely wouldn’t reach that territory, but promised to “let it fly.” He wound up taking Dallas’s first eight shots, scored 19 points in the first half and finished with 30 points on 11-for-31 shooting to match what his longtime rival Dwyane Wade of the Miami Heat managed in Wade’s final game before retirement Tuesday night.

The Suns’ Jamal Crawford, at 39, remarkably countered with 51 points, making Crawford the first player in league history to crack the 50-point mark with four different teams. The spotlight, though, never left Nowitzki, who revealed at a news conference after the game that he had decided in recent days that his surgically repaired left foot could not sustain a 22nd season.

“I would love to be there for K.P. and Luka and all these young guys and have fun with them and mentor them as much as I can,” Nowitzki said, referring to Dallas’s embryonic star duo of Kristaps Porzingis and Doncic. “But it just doesn’t make any sense anymore physically. I think mentally I could still do it — I can always push myself to work out hard — but physically the foot is just not quite there.”

Said Doncic, whose 21 points, 16 rebounds and 11 assists were overshadowed, like Crawford’s scoring outburst, by the Nowitzki party, “I was emotional, and the whole team was emotional, so imagine him.”

Nowitzki acknowledged that he has been increasingly weepy over the past week, as the end of the regular season for the lottery-bound Mavericks — and a decision he could no longer delay — drew near. But he was openly giddy when he spoke of the former stars who shared in Tuesday’s festivities, proclaiming it an “amazing” evening.

“They did this right,” he said.

Asked if he was bothered at all that one more road game remained on Dallas’s schedule, as opposed to closing out the regular season at home, Nowitzki scoffed at the idea that the league’s schedule-makers had wronged him.

“I’m totally fine with it,” he said. “The N.B.A. can’t keep up with the plans of a million players. They didn’t know if I was going to retire this season, last season or whatever.”

There was likewise no protest from Holger Geschwindner, Nowitzki’s longtime shooting coach and the former captain of West Germany’s 1972 Olympic team. Geschwindner is known in Mavericks circles for being far harder to please than his star pupil, but he embraced the storybook nature of Nowitzki’s returning to the scene of his breakthrough performance at the Hoop Summit by traveling to South Texas one last time.

“I think it’s great,” Geschwindner said. “That’s where it all started.”