When C.C. Sabathia climbs the mound at Yankee Stadium on Saturday, it will mark the first start of his 19th and final season in the major leagues.

This year will be the capstone of a long road from his hometown, Vallejo, Calif. — and one that took an unexpected detour just months ago. During an off-season in which he was recovering from a planned operation on his right knee, Sabathia, 38, was suddenly faced with a more serious health scare: a nearly entirely blocked artery near his heart that required surgery to insert a stent.

Professional baseball players rarely have to wrestle with their mortality — even with the occasional injury, they are at the top level of their sport because of peak physical performance. So for Sabathia, the final off-season of his career — one that has included 246 wins, 2,986 strikeouts, six All-Star appearances, a Cy Young Award and a World Series ring — was now laden with considerations about the importance of family and taking care of his body.

“As a friend, it was a scary moment,” Yankees reliever Dellin Betances said of Sabathia’s heart issue. “I was praying for him throughout that process. Obviously, at that point, you just want him to be good. And thank God, he is.”

Betances was with Sabathia when his heart problem first surfaced in early December. Betances, a Brooklyn native, and Sabathia, who lives in Alpine, N.J., with his wife and four children, are off-season throwing partners. One morning, Betances and Sabathia met at the workout facility where they train, Impact Zone in Norwood, N.J. After playing catch, Betances said Sabathia did not look like himself. “He just got tired a lot faster,” Betances said.

Betances didn’t think much of it, however, knowing that Sabathia had been busy the previous few weeks. But later in his workout that day, Sabathia also found himself sweating more than usual after riding a stationary bicycle.

“I was just trying to get through that workout, and couldn’t get through it,” he said, adding that he had been feeling a bit off for weeks. 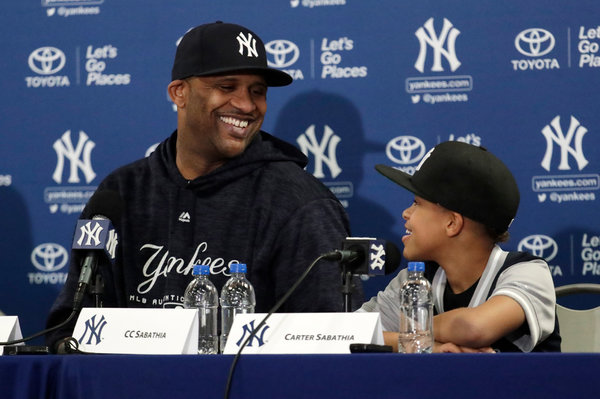 So Sabathia called Dr. Paul Lee, the Yankees’ head internist at NewYork-Presbyterian Hospital, hoping to rule out any heart issues. He underwent a stress test.

During his drive home to New Jersey from the hospital, Sabathia received a call: He needed to come back to the hospital. Recounting the visit during a January episode of his podcast R2C2, Sabathia said he was scared upon learning of a 90 percent blockage found in the widowmaker artery, an ominous nickname for the left anterior descending artery, a critical blood vessel leading into the heart.

Doctors performed an angioplasty on Dec. 11, inserting a stent into Sabathia’s artery to allow the passage of blood to his heart. Sabathia returned quickly to his normal day-to-day activities at home, which he said helped ease his concerns following a jarring experience.

“That was good in the sense of trying to wrap my mind around what just happened with my family,” he said.

Sabathia admitted on his podcast that he could not think about baseball in the first few days after the angioplasty. Instead, he thought about Chris Bosh, the Miami Heat star who was forced into early retirement because of repeated blood clots.

According to Dr. Pedro Moreno, a cardiologist at Mount Sinai St. Luke’s who was not involved in Sabathia’s treatment, there was little reason for Sabathia to be concerned about pitching after having the stent inserted — a procedure performed on hundreds of thousands of patients in the U.S. every year.

“I’ve been performing angioplasties and stents for the past 25 years,” said Dr. Moreno said, “So I can tell you that an athlete that goes through an angioplasty — a single vessel angioplasty, uncomplicated with no heart attack and normal ventricular function — could easily go back to his work as an athlete at the right time with the proper recovery.”

Sabathia’s own manager, Aaron Boone, a former infielder, returned from open-heart surgery in 2003 to play the 10 final games of his career with the Houston Astros. Doug Brocail, a former relief pitcher, recovered from two angioplasties to play four more major league seasons. Jeff Green, a basketball player, is on his seventh season since his open-heart surgery.

The Yankees have taken precautions with Sabathia. General Manager Brian Cashman said during spring training that Sabathia had received extensive medical tests and hurdles to clear, including follow-up stress tests, in order to return to play.

That does not mean Sabathia is free of all heart worries in the future. His family has a history of heart issues: His cousin, Demetrius Davis, died of heart disease in 2012 at 45. Sabathia said doctors told him this winter that history highly increased his own odds of heart trouble. That he had this surgery in his 30s, Dr. Moreno said, raises questions about premature heart disease and other contributing factors such as cholesterol levels, stress and weight.

Sabathia weighed more than 300 pounds for most of his career and, even though he had already resolved to lose weight by then, the loss of his cousin opened his eyes. So Sabathia shed nearly 25 pounds off his 6-feet-6-inch frame. But that led to a drop in velocity and two of his worst seasons, in 2013 and 2014, a drop-off Sabathia attributed in part to the fact that he had drastically dropped so much weight.

Sabathia eventually returned to 300 pounds with better eating, incorporated a cut fastball into his repertoire as his velocity diminished, and evolved into a serviceable back-of-the-rotation pitcher. He had a 3.65 E.R.A. over 153 innings last season and re-signed for $8 million in November with the Yankees, the only team he wanted to return to.

After he is done playing, Sabathia said, he plans to lose more weight. For now, he said doctors told him to keep watching his diet, which changed several years ago anyway, and continue avoiding alcohol. (Sabathia skipped the 2015 playoffs to enter an alcohol rehabilitation clinic.)

“They told me whatever I was doing was on the right track,” said Sabathia, who reported to spring training five pounds lighter than his listed weight of 300 from last season. “It’s not much change I need to make.”

As he built up from an off-season slowed by two operations, Sabathia said in spring training that he had no concerns about his heart’s ability to handle the strain of pitching. He also said then that he was using blood thinners “for a little while” under doctor’s supervision. He made his final rehabilitation start on Sundayin Tampa for a Yankees’ minor league team, his five-game suspension stemming from an episode in which he threw at a batter last fall out of the way.

“I feel good doing everything: playing catch, running, doing all my stuff,” he said during spring training. “So I’m excited.”

Even before his heart scare, Sabathia had already decided to retire at the end of this season. He had been thinking about it since last season, he said, because of the condition of his brace-supported right knee and his desire to spend more time with his children. The stent surgery reminded Sabathia about the importance of family and health. He wants to still have a good quality of life beyond this season to enjoy the time with his children — “and my grandkids,” he said.