There will be at least one more Golden State Warriors game at the concrete relic known as Oracle Arena in Oakland, Calif.

That is suddenly as declarative as we can be about what has been the closest thing to a sure thing in basketball over the past half-decade.

Even with the dynastic Golden State Warriors – even after their three championships in the past four seasons – there can be no further promises after the Kevin Durant injury scare that shook the N.B.A. late Wednesday night.

In its latest series of attrition with the Houston Rockets, this time it’s indeed Golden State that has seized a 3-2 lead — with the knowledge that a Game 7, if necessary, will be on the Warriors floor.

Yet it’s also the Warriors, just like Houston after losing Chris Paul in this same spot last season, who will chase that hard-to-get fourth victory that clinches things without one of its most important players.

Durant was fortunate to come away with a mere calf strain late in the third quarter, when the non-contact injury he suffered after a baseline jumper over Houston’s Iman Shumpert sparked immediate fears, even on Durant’s own bench, that he had just suffered an Achilles’ tear that would sideline him for months.

“That looked like it was way worse than a calf strain,” Golden State’s Draymond Green said at a postgame news conference.

The reality, though, is that Durant is likely to be out for the rest of this series even if the M.R.I. exam he is scheduled to undergo on his right leg on Thursday returns the most promising of results before the team’s flight to Houston.

Durant, who entered Game 5 averaging 45 minutes a game for the series, suffered a calf injury in his left leg during the Warriors’ first-round series with Portland in the 2017 playoffs and missed two games. That would figure to be the optimist’s minimum in this case – especially given Durant’s own worrisome reaction when he initially felt the pain. “Scary” was the word Golden State’s Stephen Curry used.

“The way you saw him get hurt on the floor, the uncertainty of him walking to the locker room, the first thought is Achilles, things like that,” Curry said. “Thankfully it wasn’t that.”

Wednesday’s score was 68-65 in Golden State’s favor when Durant exited. The Warriors had squandered all of a 20-point lead by that stage, but obviously have enough firepower and playoff know-how to gird themselves for grinding through a pivotal quarter and change sans Durant to pull out one narrow victory. Even against their most formidable foe. 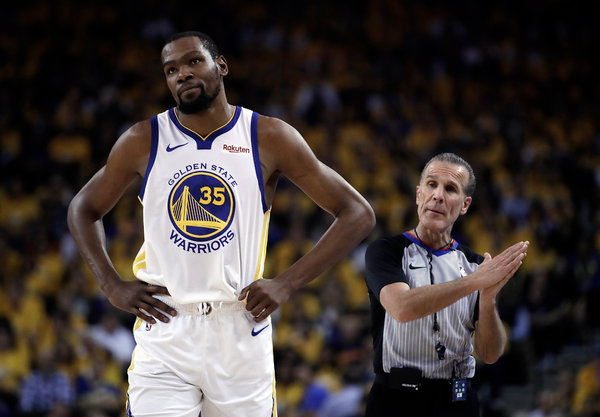 But navigating a start-to-finish Game 6 at Houston on Friday night without Durant, or Sunday afternoon’s potential Game 7 back at Oracle, will naturally be a lot tougher than thriving for a short spell – and the two-time defending champions know it.

“We wish him a speedy recovery,” Thompson said, “because we’re not the same team without him.”

The Warriors began this highly anticipated rematch of last season’s epic Western Conference finals short-handed in a big way after losing the rugged center DeMarcus Cousins to a quadriceps tear in just Cousins’ second career playoff game against the Los Angeles Clippers in the first round. Houston’s physicality has caused Golden State countless problems, and Cousins’ brutish game would have been a handy counter for Warriors Coach Steve Kerr to punish the Rockets’ switching defenses and small lineups.

Cousins’s absence and Golden State’s otherwise thin bench prompted Kerr to shift Green to center at the start of the series and move his trusted veteran swingman Andre Iguodala into the starting lineup for the first time all season. The move undoubtedly helped stake the Warriors to a vital 2-0 series lead, but the minutes being logged by Green and Iguodala at age 35 – and, frankly, Durant as well – have been a concern throughout.

In Game 5, Iguodala played 33 minutes on a banged-up left knee, and Durant just joined Cousins on the list of unavailables. The Warriors, who aren’t nearly as deep as they were when this run of championship contention began during the 2014-15 season, will soon find out if they have enough to buy Durant more recovery time – or if Houston can launch the whole Golden State franchise into a murky off-season, headlined by the looming free agencies of Durant and Thompson, earlier than anyone expected.

They got by Wednesday night thanks to Thompson (27 points after two rough games in Houston), Green (8 points, 12 rebounds and 12 assists), Kevon Looney (five of Golden State’s nine offensive rebounds) and, of course, Curry. Golden State’s early 31-17 lead after one quarter – achieved without Curry scoring a single point – predictably didn’t last. But the sharpshooting Curry finally broke out of his series-long perimeter funk to make five of his first six shots after Durant’s departure, good for 14 of Curry’s 25 points.

“It was a breakthrough for sure,” Curry said.

It certainly didn’t hurt the hosts that Paul shot just 3-for-14 from the field – or that Houston’s James Harden (31 points) managed just one shot attempt over the game’s final eight minutes and 30 seconds. The Rockets, though, are bound to bounce back with vigor once the full scope of their opportunity to slay the mighty (and compromised) Warriors sets in.

This is already just the fourth playoff series in league history in which each of the first five games were decided by 6 points or less. The Warriors have outscored the Rockets by a mere touchdown – 7 points overall – in the five games so far.

“We know we’re going to have to be near-perfect to go down to Houston without a Kevin and win a game,” Thompson said.

Kerr insisted afterward that he had been assured by the Warriors’ medical staff that Durant’s injury was “not the Achilles.” No need, then, to commence with the breathless (and largely futile) speculation about how the setback potentially affects Durant’s free agency in July and the rival teams such as the Knicks, Nets and Los Angeles Clippers who have been planning to aggressively court him starting July 1.

Focusing on the mere playoff impact of Durant’s freshly uncertain status is grave enough. He’s averaging 35.4 points, 5.2 rebounds and 5.0 assists in these playoffs, while shooting 51.8 percent from the floor and 42.9 percent from the 3-point line. With LeBron James missing from the N.B.A. postseason for the first time since 2005, it’s Durant who has emerged as the most feared singular force on the planet.

Can the Warriors beat the Rockets one more time without him? How much of the conference finals would Durant have to miss if Golden State manages to advance? Is this – through major injury – how the Warriors’ dynastic runs ends before next season’s move from Oracle to the Chase Center in San Francisco?

Those, for now, are the far more pertinent questions than anything July-related. And the Warriors, sure things no more, are as eager to learn the answers as anyone.

“We got to have his back the way he’s been honestly carrying us the entire playoff run,” Curry said of Durant.