The WNBL will return to free-to-air television this season with SBS to simulcast at least nine regular-season games live.

Fox Sports will continue as the league’s main broadcaster, showing one game a week and all finals live along with the Opals games from the upcoming FIBA Women’s World Cup in Spain starting on September 22. 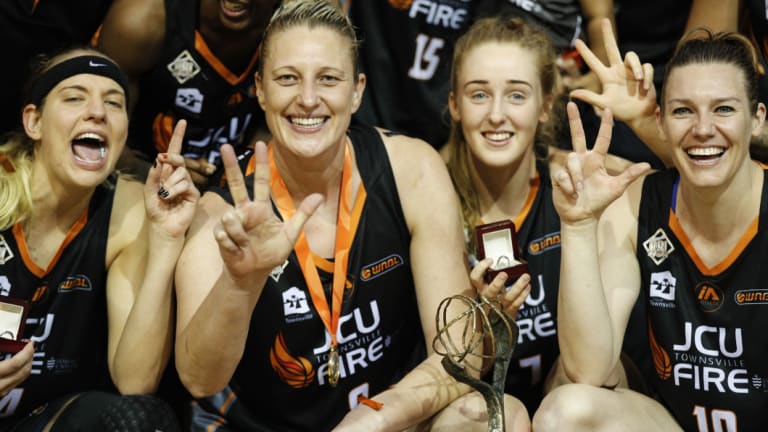 Suzy Batkovic of Townsville Fire celebrates with teammates after winning the 2017/2018 WNBL championship in January.

The WNBL had a long stint at 3pm on either Saturday or Sunday afternoons on ABC, until the broadcaster cut its ties with the league at the end of the 2014-2015 season.

Fox Sports picked up the rights last season and will work in partnership with SBS to share at least nine Saturday 3pm games, while it’s understood talks are continuing between the two broadcasters to simulcast some Sunday games and possibly some finals.

SBS will simulcast nine Saturday 3pm games live and also live-stream them via SBS On Demand and the SBS Sport website.

This season, Fox Sports will continue to broadcast and stream one game a week and also show all finals games live and ad-free.

Head of the WNBL, Sally Phillips, said the addition of SBS was a win for the league, which is entering its 38th season.

“I know I speak on behalf of all WNBL fans when I say that this is a truly great day for Australian women’s basketball,” Phillips said.

“With Fox Sports and SBS joining forces, it will ensure that the league will receive more exposure than ever before.”

Phillips also praised Fox Sports for working closely with SBS and she hopes the arrangement can continue beyond this season.

“It’s all about building that relationship and the feedback from SBS has been on the same lines as Fox Sports – they want to bring more Australian women’s sport free and live across the country,” Phillips said.

“So we hope to build that relationship with them so this can happen into the future.”

SBS Director of Sport Ken Shipp said this was the first time the broadcaster would show WNBL games.

“This is SBS’s first time broadcasting the WNBL, and continues SBS’s commitment to making the best of domestic sport accessible to all Australians, as well as raising the profile of women’s elite sport,” Shipp said.

“This partnership with Basketball Australia and Fox Sports allows SBS to bring the WNBL to all Australians live, free and in HD.

“Basketball’s popularity continues to rise in Australia, it has an amazing ability to bring together diverse communities through the game.”

The first Fox/SBS game will be Perth Lynx hosting Adelaide Lightning in Perth on October 13 at 3pm AEST.