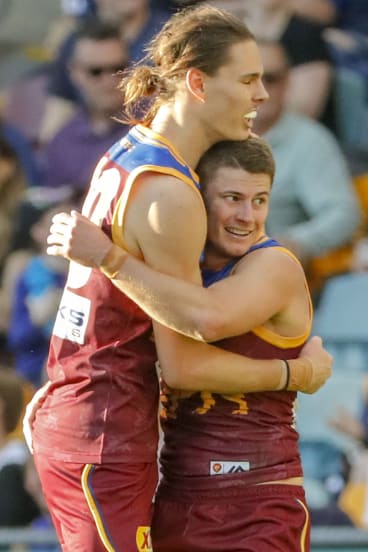 Dayne Zorko (right) gets a hug from Eric Hipwood.

After the Brisbane Lions’ breakthrough win against Fremantle last week came the test: could the Lions win the game they were expected to against Carlton, the only side below them on the ladder?

The Lions have more talent and, many claim, are better performed than several teams above them. What’s been lacking is a winning mindset.

The answer was yes, romping to a 65-point win after a slow start for their first back-to-back wins since 2015. Eric Hipwood kicked a personal-best six goals and Dayne Beams was best on ground in another outstanding performance, fading slightly late but still finishing with 40 disposals after being on track for 50 at half-time.

Beams was the architect, and is playing some of the best football of his career in one of the toughest years of his life. If anything, he’s been better since relinquishing the captaincy after the passing of his father. His replacement Dayne Zorko grew as the game went on, not dominating, but also knowing he no longer has to.

For Carlton, to be flogged so badly was a disaster. A few goals in junk time couldn’t mask the fact they managed a woeful four goals in well over three quarters of football. Even their two emerging superstars, Charlie Curnow and Patrick Cripps, were soundly beaten when the game was still alive.

And even then, Curnow and Cripps finished among their side’s better players in a game where they didn’t have a winner other than, perhaps, Matthew Kreuzer over Stefan Martin. Otherwise, Curnow was well accounted for by Darcy Gardiner, one of the most improved players in the league, and Cripps by Jarrod Berry.

It exposed a serious gulf in overall talent, and saw the Lions move comfortably above Gold Coast into 15th on the ladder. Blues fans could be forgiven for despairing at a long list of non-contributors and their continued inability to score. They face fellow battler St Kilda next Friday. 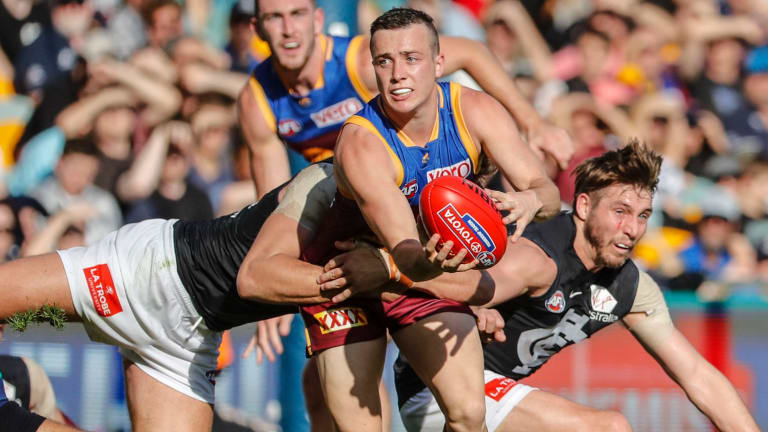 It started like what it was, though: a game between 17th and 18th, both of whom have struggled to win a first quarter all year. The Lions snatched a two-point advantage at the first break, but had been beaten to the contested ball and the Blues had spent most of the quarter in their forward half.

What they couldn’t do was match the Lions when the ball got into space, and midway through the second quarter the Lions began to open the game up. And no one symbolised their growing confidence more than last year’s No. 1 pick Cam Rayner, whose contemptuous fend-off of Darcy Lang on the member’s wing thrilled fans. 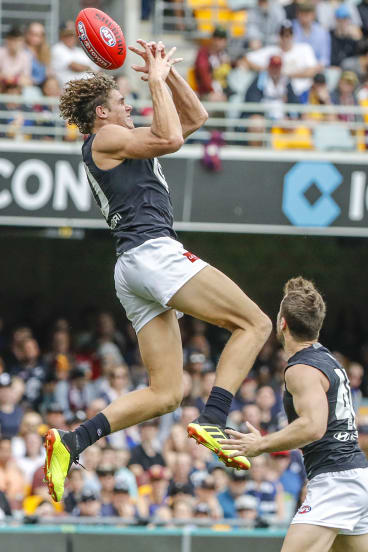 Charlie Curnow spills one at the Gabba.

Rayner was last week’s Rising Star nomination, and while he hasn’t truly set the league on fire in his first year, what he has in buckets is presence. He carries himself with the swagger of a kid who knows he belongs, and he makes teammates in their third or fourth years walk taller, too.

Another player who’s growing up fast is Jarrod Berry, in his second year. Last week he rode Nat Fyfe like a bucking bronco until Fyfe hurt his hamstring. This time he took another raging bull, Patrick Cripps, and kept him to nine disposals in the first half. That was critical, as the Lions held the Blues to a point in the second

In that time the Lions broke the game open, Hipwood leading up hard for his second goal, small forward Jake Barrett jumping in with two in a row – one cleverly roved, the other fine set shot from a tough angle – and Beams putting the Lions 37 points clear with a raking running shot.

The second half was a mostly a procession, not to mention a party for a parched home crowd. It was also one of the better crowds at the Gabba for some time, with over 21,000 fans making plenty of noise. Everyone loves that winning feeling. For Carlton, it must feel like Sunday, too far away. 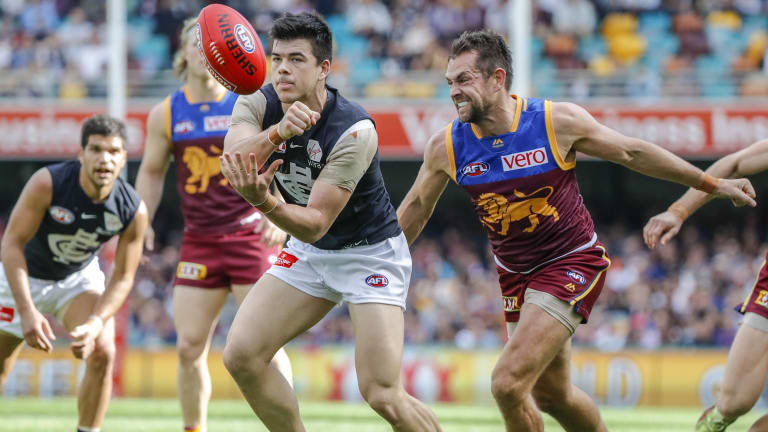