Wales’ Rachel Rowe returned from a year out through injury to reignite their Women’s Euro 2021 qualifying campaign.

The Reading midfielder’s late winner, a low left-foot shot, was her first for her country and saw Wales edge Belarus.

The result keeps Wales second in Group C, two points behind leaders Norway but crucially opens up a four-point gap over third-placed Belarus.

Belarus created good chances, but skipper Anastasiya Shcherbachenia sent the best one over the crossbar.

On balance Wales did deserve all three points with captain Natasha Harding leading from the front, having a strong first-half penalty appeal turned down and hitting the woodwork with a long-range shot.

In the evening’s other pool game, Norway took their goal difference to 25 after thrashing Faroe Islands 13-0.

Wales, looking to bounce back from the disappointing home draw against Northern Ireland, were without injured skipper Sophie Ingle and star midfielder Jess Fishlock.

Manager Jayne Ludlow handed a debut to Tottenham Hotspur midfielder Anna Filbey, while Rowe played her first international for a year after an ACL injury.

Belarus looked the better side in the early exchanges at the Borisov Arena, but Wales slowly worked their way into the game, with Kayleigh Green unable to finish off a half-chance from an acute angle.

Hayley Ladd then let fly with a long-range effort that had plenty of power but was straight at Belarus goalkeeper Nataliya Voskobovich.

Belarus were dominating the middle of the park though, with midfielders breaking from deep causing Wales problems.

Home skipper Shcherbachenia was particularly impressive and just failed to meet an inviting cross that would have given Belarus the lead.

Wales were denied a penalty when Harding broke through and was able to nick the ball beyond the lunging Voskobovich before being sent tumbling by the keeper, only for referee Tanja Subotic to wave play on.

The visitors had a second good chance before half-time when Rowe worked herself into space, only to see her goal-bound shot well blocked.

The half ended with a flurry of chances, with Wales indebted to the reactions of Laura O’Sullivan who rushed from her goal to smother Anastasiya Kharlanova’s shot.

Then it was Wales’ turn to threaten as Rhiannon Roberts’ header from a corner was tipped over the bar by Voskobovich. 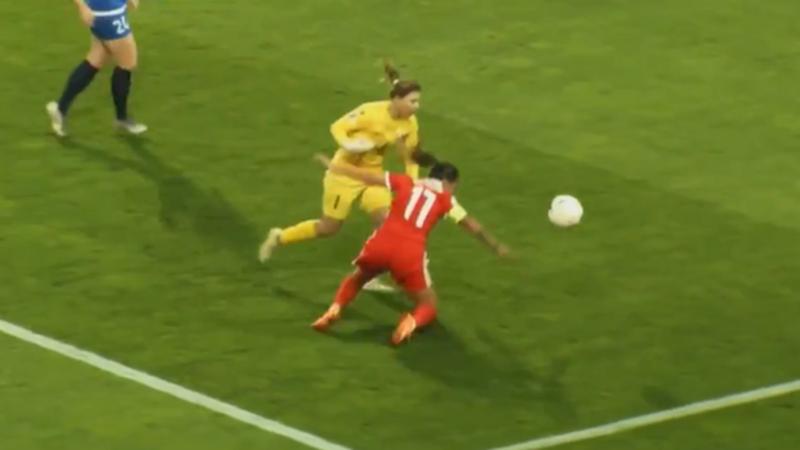 Wales continued to live dangerously after the restart and were fortunate that Shcherbachenia blazed over the bar with the goal at her mercy.

The commitment from both sides was fierce and the game was held up after a worrying collision between Rowe and Tatyana Krasnova, which saw the Belarus substitute booked.

Wales went close again when Elise Hughes had the ball in the back of the net, but the Everton forward had drifted offside after Harding had clipped the corner of post and crossbar with a fantastic curling shot.

Green then broke through but a heavy touch allowed Voskobovich to smother the danger, with the Wales player booked for the challenge.

But with seven minutes remaining Rowe capped her comeback game with a crucial winner – her first international goal on her 31st cap – after Roberts had made a nuisance of herself in the area from a corner.

The ball broke loose and Rowe scampered after it before unleashing a low left-foot shot that found the far corner of the net.