Telemundo, the Spanish language broadcaster for the Women's World Cup in the United States, has been running promotional commercials for the summer tournament featuring the tagline "Unstoppable Women".

The spots highlight statistics such as that 50 per cent of global professional female soccer players receive no pay; that one-third of them need a second job to make ends meet; that nearly 20 per cent report some form of gender discrimination. 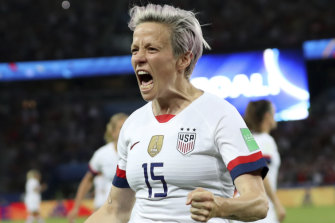 The clincher: Megan Rapinoe after scoring the second goal.Credit:AP

The campaign features players from American striker Christen Press to Argentine goalkeeper Vanina Correa talking on camera about needing to maintain a second job. "It is very difficult," Correa says in Spanish directly to the camera.

"It couldn't be a better moment to showcase women," said Karen Barroeta, the network's head of marketing. "What we want to do is own the narrative of empowering women because it helps promote the visibility of the tournament."

The most anticipated match of the World Cup – Friday's quarter-final showdown between the United States and host France in Paris – played to the backdrop of the activism of many of its participants. And for a global audience that experiences the event mostly through television, it's impossible to miss.

Johnson & Johnson launched a campaign called "Because She Can". The Mars company unveiled a #SupportHer hashtag to "galvanise fans Across UK". And in Australia, Hyundai launched a "Thank You Letters" campaign, where several members of the Australian national team give thanks to mentors who have aided their careers.

The brands are only taking their cues from the teams participating in the tournament, which FIFA expects to be viewed by a record one billion people.

Buoyed by such growing interest in the sport, a number of teams have pressed their national federations for more equitable treatment in recent years, including the United States' high-profile lawsuit for equal pay, the Spanish team rising up against an abusive coach, and Australia cancelling a summer tour to protest low pay.

Such actions have elevated this World Cup from an increasingly popular athletic event to something of a cause to rally around.

"The MeToo movement is a trend line through the tournament," said Karen Weaver, a sports business professor at Drexel University. "It's a moment for women's empowerment, both in sports and beyond, and it's coming through on multiple levels. Advertisers and TV platforms want to tie themselves to that message and what this tournament stands for right now."

Four years ago, when the Women's World Cup was played in Canada, the tournament opened with complaints about its games being played on artificial turf fields, which affect the quality of play, present higher injury risks and have never been used in men's World Cup games.

There were also half as many games on broadcast television in the United States as there are this year. But as the American women blazed through the tournament and set an American soccer viewership record in the final (25.4 million) the event transitioned in the US from one that was treated as a complement to the men's tournament to a premier showcase on its own.

The ad sales for 2019 back that up. Four years ago, at this point in the tournament, according to a person with knowledge of the sales, broadcaster Fox was still selling ads on a game by game basis. This year, the network is virtually sold out.

The women's tournament has the potential to offer advertisers something else, according to Minal Modha of the London-based research firm, Ampere Analytics: a broader audience. Nearly four in 10 followers of the women's soccer in the UK are women, a higher number than men's soccer.

"That means FIFA can look beyond just male-focused brands for sponsorships," Modha said. "It's a much bigger range."

Added Andre Schunk, who has been involved in advertising at several World Cups as head of global marketing at sports marketing firm Octagon: "World Cups draw the biggest brands, spending their biggest dollars with their biggest talent. What you see this year is they are investing in big campaigns and approaching the omen's tournament the same way as the men's World Cup in terms of the power of the platform. That's a material change."

"We didn't realise what we had," said Patrick Crakes, a former Fox executive turned media consultant. "Nobody envisioned it being this big when we first got the Women's World Cup."

But the confluence of the US team taking off, becoming both a juggernaut on the field and also a rallying cry off it – as well as the recognition that the women's competition is every bit as compelling as the men's game – has helped Fox to give the tournament more visibility. The network aired 22 group-stage matches on broadcast TV versus 11 four years ago, which has helped TV viewership for the early part of the World Cup outpace four years ago, despite those games being played in prime time in the US (Tournament to tournament comparisons are impacted by time zones, matchups and broadcast v cable schedules).

Around the world, there have been notable milestones for viewership. France's opening match against South Korea was the most-watched women's soccer game in French history, drawing 10.6 million viewers, nearly half of TV's nationwide. Airing on the popular free-to-air Globo station, Brazil's round-of-16 match against France was viewed by more than 35 million people in Brazil, the largest domestic audience to ever watch a women's soccer game, surpassing the 2015 World Cup final in the United States.

"What we're seeing, first in 2015 and now this year, is that with this tournament if you build it, they will come," said Crakes, the former Fox executive. "If you put the resources and the infrastructure behind it, whether you're an advertiser or a network, the response is going to be there."

He added: "And in the United States, that means you get to wrap your arms around these women and the flag at the same time. Who wouldn't want to do that?"