In the space of 10 days last year, Bulldogs fans had every right to believe again.

On April 30, they signed Kangaroos and NSW prop Aaron Woods on a four-year deal. Soon after, they convinced Kieran Foran to leave the Warriors to play again under coach Des Hasler. 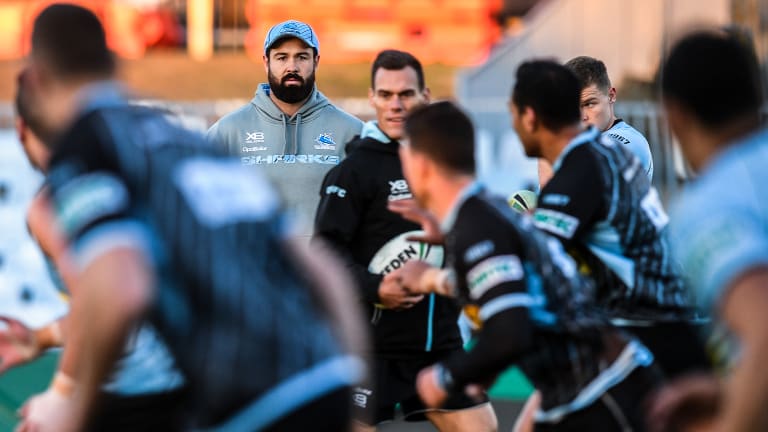 And now? One prized signing has left the building, the other is still in the building but badly injured.

On Tuesday, Woods was released to join the Sharks for the rest of this season and another three after that. Meanwhile, Foran is about to have surgery on a busted toe that will sideline for the rest of the year.

“Stability is something I’m really looking forward to,” Woods told reporters at Shark Park late on Tuesday. “I’m excited about the next three and a half years.”

You can imagine the collective eye roll from Bulldogs supporters as he said it.

Didn’t Woods leave his beloved Wests Tigers because he wanted “stability”? Instead, he walked straight into a salary cap catastrophe that has set the club back years, one that ultimately claimed the jobs of Hasler, chief executive Raelene Castle and, finally, chairman Ray Dib.

“Definitely,” he said, before nervously grinning. “Well, I hope so.”

The reality is Woods’ departure is of enormous benefit to the Bulldogs. As harsh as it sounds, it would help them even more if Foran decided over the next six months that it’s time to consider his life after football — and even another club. 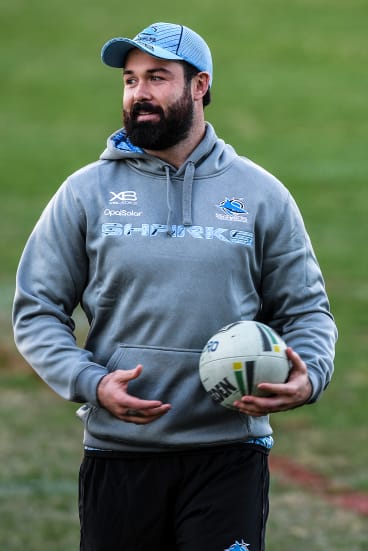 Shire thing: Aaron Woods after signing for the Sharks on Tuesday.

“Fundamentally, tough decisions need to be made now for the club to take control of its salary cap,” Bulldogs chief executive Andrew Hill told Fairfax Media. “We can now be more active in the player market than we could’ve been. It’s one thing to be cap compliant but it’s another to build a strong, competitive squad that can challenge for premierships. These decisions are all about fast-tracking our plans to become a force again.”

Both the Bulldogs and Sharks are claiming victory over the Woods deal, adamant they’re getting the best value for money.

Woods’ move has been talked about for weeks but it wasn’t confirmed until 8pm on Monday when his manager, Isaac Moses, called Hill to tell him that the Sharks had come up with the right money.

The timing was important. If Woods was to play for the Sharks against the Warriors in Auckland on Friday, he needed to be named on Tuesday night in their 21-man squad.

In truth, both clubs win.

The rough maths is that Woods was on about $850,000 a season. The Dogs have been adamant they weren’t prepared to pay anymore than $200,000 for him to play against them at another club. Hill says they never wavered from that benchmark.

The Sharks have dithered back and forth, uncertain about whether they want to pay $600,000 to $700,000 a season for a player who doesn’t deserve that sort of pay cheque on current form.

But they believe Woods can find his old form.

He’s an Australian and NSW player. And with Paul Gallen headed for retirement, and Wade Graham and Luke Lewis battling injuries, and with them needing a big boy in the middle to ensure they make the finals, it is a smart signing for coach Shane Flanagan.

“It was difficult to agree to terms to let Aaron leave the club,” Hill said. “The fact is we weren’t actively shopping him around. Unless the terms were in the best interests of the club, Aaron would’ve remained playing for the Bulldogs. It gives us greater flexibility around recruitment and retention, starting immediately instead of waiting until after the 2019 and 2020 season.”

It will be a long time before the salary cap mess at the Bulldogs is untangled, but Woods’ early departure relieves a lot of pressure.

The previous regime horrifically overshot the runway on the salary cap until the end of 2020, banking on a salary cap of about $10.4 million when, after the collective bargaining agreement with the players was finally signed, it was set at $9.4 million.

Now, the money they were going to spend on Woods can be spent on better players. A dominant half is the priority.

Foran was on about $380,000 a season at the Warriors. He’s on more than $1 million a season. Even before his toe injury emerged, his back problems were preventing him from being the player he can be.

“There has been no discussion with Foran or the NRL about medically retiring him,” Hill said. “We are confident that our medical team will work with him so he can return to the footy field.”